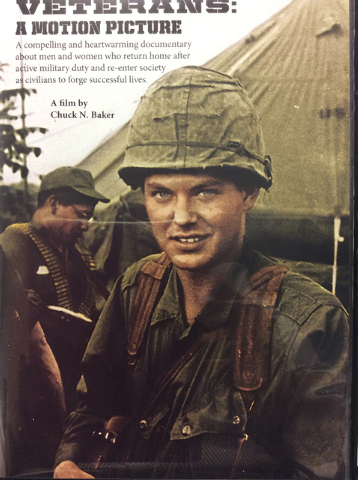 At the time when Chuck N. Baker was drafted to serve in the Army in the mid-1960s, he never imagined being a veteran would shape his entire life.

Now, more than 40 years later, sharing the good works accomplished by veterans has become his passion.

Baker, who writes a monthly column about veterans issues for the Boulder City Review, recently completed and released “Veterans: A Motion Picture.” The documentary focuses on the positive side of being a veteran.

“I was so tired of seeing all the negative stuff about veterans and the negative news about veterans coming back with various problems like PTSD (post-traumatic stress disorder). Of course, a lot of veterans have problems, but so many more veterans do have positive experiences,” he said. “Those stories don’t seem to get told.”

There also are interviews with American Legion and Disabled American Veterans members, as well as others.

Baker said some of the segments and interviews were taken from his television show “Veterans Reporter-Chuck N. Baker Reporting,” which ran on KTUD-TV in Las Vegas, and some were done exclusively for the documentary.

He also incorporated some black and white silent footage he shot in the 1960s with a 8 mm camera.

“I was working for the Chicago Tribune as a copy boy so I was able to attend news events and shoot some film at the time of some famous politicians who happened to have been veterans. I didn’t know then that I would use the footage far into the future, or that I would serve in combat myself a few short years later.”

Baker served with the Army’s 1st Infantry Division and received a purple heart after being wounded in Vietnam.

Once he returned to his civilian life, Baker said he began volunteering with and joining veterans organizations including the American Legion (Post 31 in Boulder City), Veterans of Foreign Wars and Military Order of the Purple Heart. He also served as Nevada’s state commander for the Disabled American Veterans.

It was through these organizations, as well as his work as the founder and managing editor of the Veterans Reporter newspaper in Nevada that he heard many stories about the good things veterans were doing.

Baker worked on the film for about a year, including composing several original songs.

The documentary, which runs one hour and 11 minutes, is available as a DVD for $19.95 on Amazon or eBay.

It also has been running on BCTV and is scheduled to be shown at 8 a.m. and 8 p.m. daily through Tuesday.