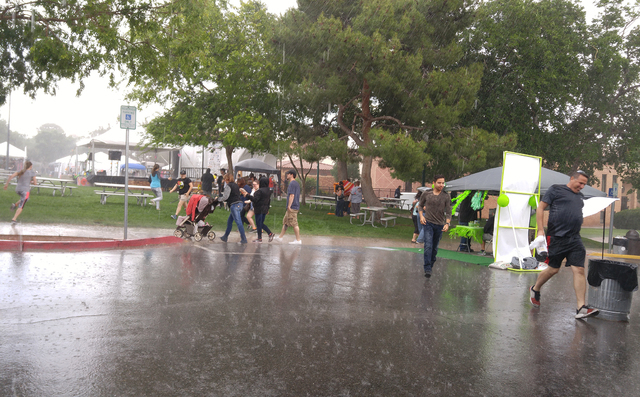 Downtown Boulder City was taken over this weekend as the 39th annual Spring Jamboree sprawled across three parks and attracted vendors and attendees from Southern Nevada and beyond with live entertainment, unique artisanal goods and activities for all ages.

The Spring Jamboree is the Boulder City Chamber of Commerce’s largest fundraiser every year, according to chamber CEO Jill Rowland-Lagan, and though the festival was doused with a quick deluge of rain Saturday afternoon, this year ended up one of the most successful ever.

While the final figures are still being tabulated, as of Monday afternoon the event was confirmed to be one of the three most lucrative fundraisers to date. The jamboree covered Wilbur Square, Bicentennial and Escalante parks with 237 vendors and an estimated 30,000 shoppers and partygoers.

When storm opened up, attendees began to sprint for cover wherever they could find it. “Many of our vendors said the brief rain actually helped business, said Rowland-Lagan. “While some attendees may have hidden under the carports or under building ledges, others took shelter in the vendors’ tents and provided a captive audience.”

Though the downpour was loud, it was also short as the clouds broke and the water abated in 20 minutes, at which point the good times were back in full swing for most of the jamboree revelers.

“The rain ain’t sending us home,” said Chris Kemp, as his 5-year-old son Gavin Kemp excitedly agreed. The two recently moved to Boulder City from North Dakota and said they thought the weather still a great change from the cold climate they were used to.

Though the rain may not have scared off the Kemps, some vendors did feel that the rain slowed things down a bit.

Those with tents in Wilbur Square Park, away from the heart of the festival, didn’t enjoy as strong a rebound even after the sun came back out and many from the auto and antique shows closed up shop and left early to protect their goods.

“It was great until the rain hit, but after that things slowed down a little,” said April Parelman of Las Vegas-based Sniffany &Co. “We did sell a few extra doggy raincoats, but we expect it will be better tomorrow.”

According to Rowland-Lagan, Parelman was right and Sunday brought in a much larger crowd, many of whom were looking for Mother’s Day gifts.

“Some people told us they planned around the weather and waited until Sunday to come into town,” Rowland-Lagan said. “Others said they checked things out Saturday, but purposefully waited for Sunday to make their purchases.”

“The city and our volunteers really made this all possible,” Rowland-Lagan said. “Thanks to them this year was a huge success.”