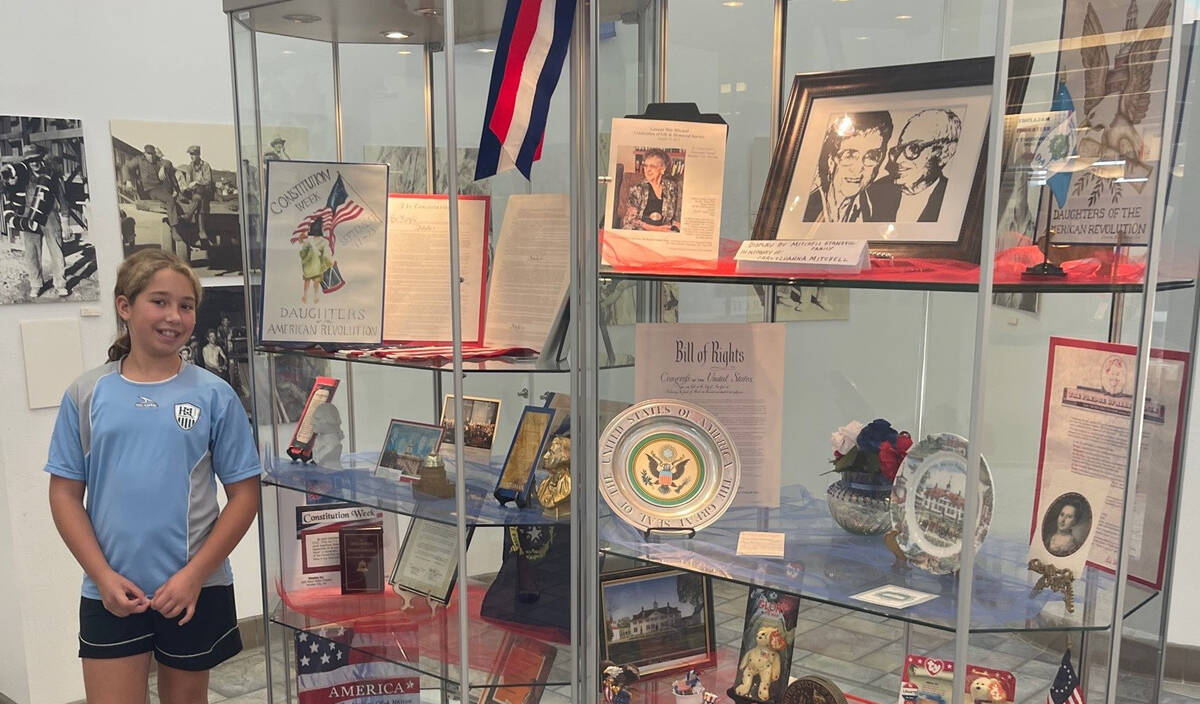 (Photo courtesy Susan Mitchell) Lila Stankovic, 11, is the third generation of the Mitchell-Stankovic family to work on the display at Boulder City Library, 701 Adams Blvd., to commemorate Constitution Week, which is observed Sept. 17-23 each year.

The late Luanna Mitchell started this tradition in 2010 when she served as historian of the Silver State chapter of the Daughters of the Revolution. After her death, her daughter, Susan Mitchell Stankovic, continued the tradition and engaged other family members and grandchildren to creating something informational and beautiful to visit.

This year, Lila Stankovic (son Ryan’s daughter) helped her grandmother create the display, making sure the lights showcased important highlights of the Constitution.

The United States Constitution stands as a testament to the tenacity of Americans throughout history to maintain their liberties and freedoms and to ensure those unalienable rights to every American. The tradition of celebrating the Constitution was started by the Daughters of the American Revolution. In 1955, DAR petitioned Congress to set aside Sept. 17-23 annually for the observance of Constitution Week. The resolution was adopted by Congress and signed into law on Aug. 2, 1956, by President Dwight D. Eisenhower.

The celebration aims to:

■ Emphasize citizens’ responsibilities for protecting and defending the Constitution.

■ Inform people that the Constitution is the basis for America’s heritage and foundation.

■ Encourage the study of the historical events that led to the framing of the Constitution in September 1787.

The Mitchell-Stankovic family also presents the Luanna and Carl Mitchell Constitutional Scholarship to a Boulder City High School senior who writes the best essay regarding the Constitution and demonstrates good citizenship.