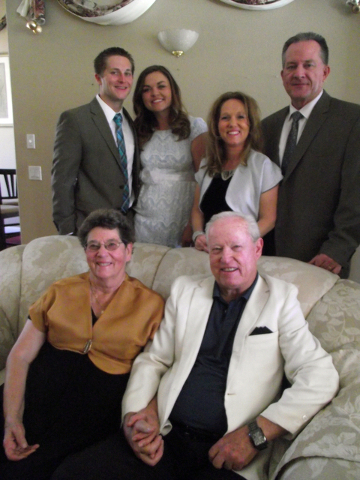 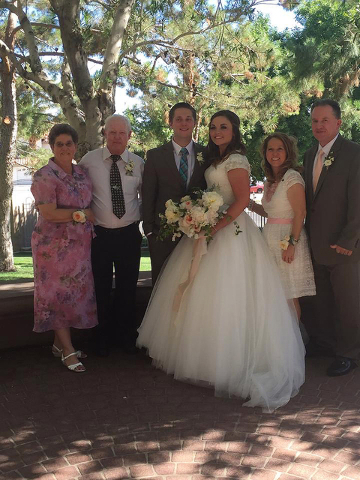 Little did Clare and Kaye Tobler know they would start a legacy of love when the decided to marry 50 years ago.

Adding to the celebration was a third generation, the Honeys’ son, Ryan Honey, who married Kylie Winward on the same day.

They all agree June 16 seems to be a lucky day for love in their family.

Clare said his wife originally picked their wedding date because they wanted to get married at The Church of Latter-day Saints temple in Salt Lake City and then hold a reception a few days later in Washington, Utah, where they were living. After getting engaged on April 1, they picked a June wedding date because they wanted to wait until after they both graduated from Southern Utah University in Cedar City, Utah, where they had met.

They were the first of 30 couples to get married at the temple that day.

“And they have been No. 1 ever since,” Pamela said.

The family’s ongoing chain of love started about one year before the Toblers’ silver anniversary. Clare said they told their children — Bill Tobler, Pam Honey, Kristin Torgesen and Rusti Bignami — not to plan anything for that day because they were going to take a cruise to celebrate.

Pamela, however, had a different idea. After Doug proposed to her on Valentine’s Day, she began looking at dates for their wedding. When she realized all of their family would be in town June 15 for an anniversary celebration for her parents, she thought the following day — a Saturday — would be ideal for her wedding. After the ceremony and reception, her parents would leave on their cruise and she and Doug could go on their honeymoon and “we would all be happy,” she said.

“When we got married, I didn’t realize the significance of their 25th anniversary,” Doug said.

That has since changed. In fact, the importance of their wedding date passed on to the Honeys’ oldest son, Ryan.

“We all said it would be neat if he married on the same day,” Clare said.

And that was before he even had a girlfriend, the family said.

“I knew when we would get married even before we were engaged,” Kylie Winward, now Kylie Honey, said.

When they were dating, she mentioned she would like to get married on a weekday and have a few quiet days with her new husband before having a large family reception. She had seen a cousin get married and have the reception on the same day and by the end of the festivities, everyone was exhausted, she noted.

So, one day Ryan suggested getting married on a Tuesday — in June. “I put it all together,” Kylie said.

She and Ryan met on a blind date arranged by their parents and friends. The arrangement involved seven couples and although she was hesitant at first, Kylie said she agreed to go.

A few days before their wedding, Ryan and Kylie said they were excited for the day and the prospect for a long and happy life together. Both of their families have histories of celebrating at least 50 years together.

Both Clare and Kaye Tobler’s parents and grandparents marked their golden anniversaries, as did Doug Honey’s. Kylie’s grandparents also were married for 50 years.

That longevity and love will be marked Friday during a special golden and silver anniversary celebration. Pamela said they are using Michael Martin Murphey’s song “A Long Line of Love” as the theme for the party.