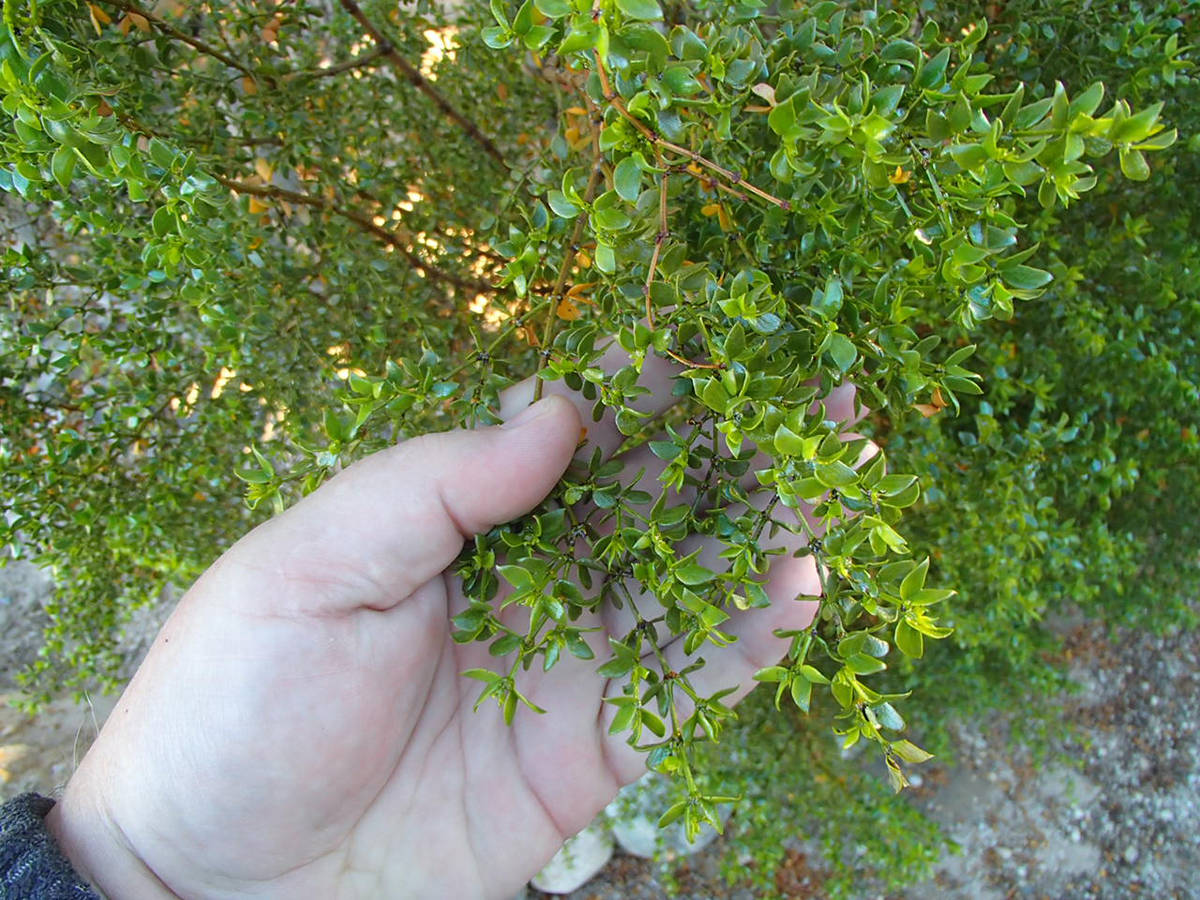 (Bob Morris) Creosote is one type of plant that has chemicals that cause allelopathy, which prevents other plants from growing beneath them. 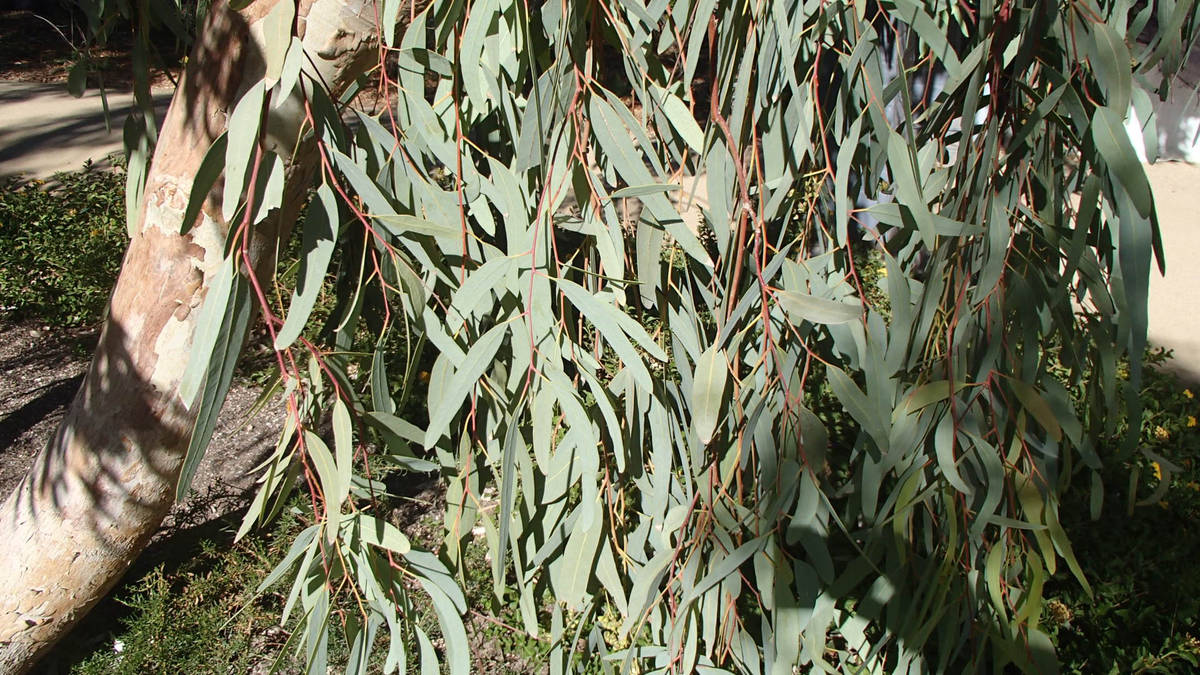 (Bob Morris) Do not use leaves, such as these from a eucalyptus tree, as mulch without composting them first. 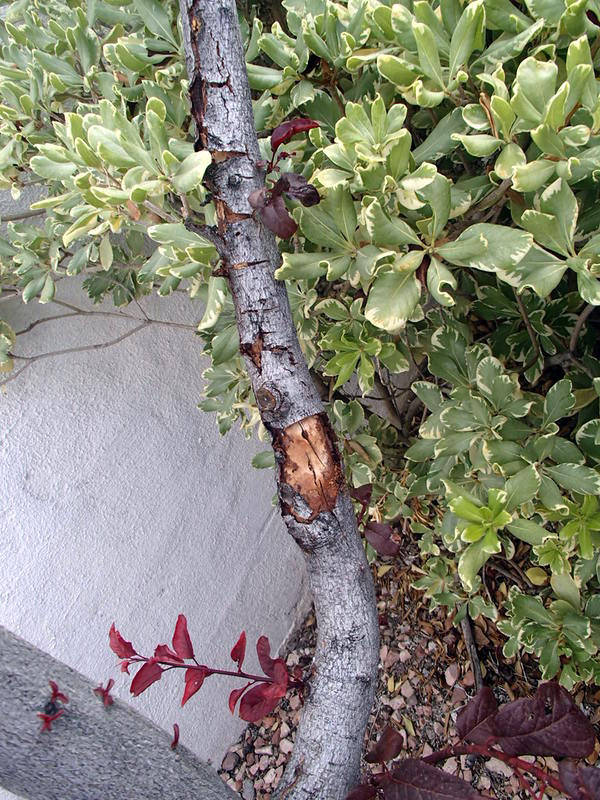 Q. Have you ever heard of kurapia as a groundcover? I wonder if it would succeed here in Las Vegas. I know that this recommendation is from a landscaper in California’s Central Valley, so they have a similar climate.

A. I had not heard of it until now. From a marketing perspective it is supposed to be a lawn replacement for grass. It may be a visual lawn replacement but will not withstand traffic or play.

Kurapia was started from the native plant, Lippia nodiflora (a synonym for it is Phyla nodiflora for those into its botany), that marketing people say was found in the coastal regions of Japan. But Lippia is native to the tropical and subtropical areas of South America and the United States. This calls into question its tolerance to extreme desert temperatures and low humidity. Growing in our desert soils should not be a problem for it.

The Central Valley in California is arid but not an intense desert climate like ours so how it will perform during the cold winter temperatures of Las Vegas is unknown. Because it is subtropical, like hybrid bermudagrass, I am guessing it will turn brown when fall and winter temperatures reach into the low 40s.

I also read about it at the University of California trials in the subtropical and Mediterranean climate of the University of California, Riverside campus. It is a Lippia, which can be a common weed in some lawns. Ornamentally it is considered a groundcover, so it is not meant to withstand heavy traffic and, at 3 inches tall, it does not need to be mowed. It is primarily a visual lawn replacement during warm and hot months. You can mow it if you want it shorter than 3 inches tall. I suspect it might have difficulty growing in the hot and dry western and southern exposures of a landscape.

It spreads about 3 feet in diameter so, like hybrid bermudagrass, planting it 12 inches apart in a triangular pattern will cause it to cover the area in about two months during warm weather if watered regularly and fertilized monthly during establishment.

It will perform best if the soil is amended at the time of planting, and not grown in extremely hot locations. They claim it uses less water than tall fescue lawns and about the same as a bermudagrass lawn.

Q. What’s your opinion about using eucalyptus leaves as mulch?

A. There are reports that leaves from some plants will sometimes inhibit the growth of others. I think this is what you are referring to. This inhibition of growth was first thought to be due to competition for water and plant nutrients, but plant chemicals have been isolated from some fresh plants and found to affect the growth of others. How this works depends on the plant making it and their “allelopathy” is not consistent between different types of plants. All this makes it difficult to isolate and prove its existence. It is clear to me that plants “communicate” in ways we have not thought about but how this happens is not clear.

The classic example of this is black walnut inhibition of growth (allelopathy) on plants growing under its canopy. Other examples of “allelopathy” exist in creosote bush, lavenders, salt cedar, bermudagrass and others. It is not just a simple answer but varies between allelopathic plants and plant parts.

Personally, I have never tried using eucalyptus leaves. I prefer to use wood chips as a mulch.

One way around this is to compost, or “rot,” eucalyptus leaves. It seems that in most cases the plant or human “toxins” are decomposed as well rendering what’s left as nontoxic to plants and animals. So, for this reason, I would not use leaves of any kind without composting (rotting) them first unless I knew the leaves were not toxic to other plants.

Q. My green euryops daisies were doing beautifully last spring and summer, but this year they became tall and leggy and grew poorly. It is late July now. Is that too late to prune them back?

A. Euryops daisy grows best at temperatures from 40 F to 100 F. When it gets above 100 F then this plant struggles. The ideal temperature for their growth is probably about 65 F to 75 F. If on the west or south side of the home, move it to the east side (cooler microclimate) this fall (milder time of year), if possible, and put other plants around it that like water. Cut them back hard and improve the soil with organics such as compost when planting. Use a preplant fertilizer mixed with the soil like the one for roses or tomatoes. If you use a “rich” compost, then extra fertilizer is not needed. They will not like it much if surrounded by rock.

As far as cutting them back now, wait until daytime temperatures are 65 F to 75 F and then prune them an inch or two above the ground and let them regrow from the base before it gets cold this winter. In the Las Vegas climate, that would probably be sometime in October.

Q. I heard that hand trimming bushes was better than using a hedge trimmer.

A. Yes, it is. It is not only “better” but it is faster, needed much less often and with less cleanup involved afterwards. Pruning with a lopper is done once every two years or even less often.

Timing is also important. Pruning with hedge shears is done anytime of the year by “professionals.” When hand pruning, remove stems after the shrub finishes flowering or in the winter if it flowers in the early spring. Correct hand pruning with a lopper removes two or three large stems from deep inside the plant once every two years. That’s easy to clean up. Hedge shears focus on removing the new growth at the ends of stems. That cleanup requires a blower.

Q. I’m hoping you can help save my plum tree. It has fireblight, I cut off the infected area but it is spreading to the rest of the tree. It has these gel-filled sacs that are moving through the tree and I’m not sure how to treat it. Can I save the tree?

A. It is not a disease such as fireblight. That disease only attacks European pear, Asian pear and apple as far as fruit trees go. Not plums. It will damage some ornamentals in the rose family of plants. Damage from fireblight is seen starting in about May.

Your “gel-filled sacs” are typical of plum when limbs over a half-inch in diameter are damaged from anything: diseases, natural causes or insects. Damage this time of year usually comes from the sun (sunburn) or from boring insects or both.

“Sunburn” damage can be a two-edged sword; it can cause damage on its own, but it can also lead to further damage by boring insects that we refer to as “borers.” Borers in our climate are beetles with an immature form (grub) that tunnel into damaged stems. The kind here are never found in the ground. Frequently these stems may first be damaged by intense sunlight (sunburn).

If this damage is caught early enough (March through June) and it is light, any grubs can be easily pruned or cut out with a sanitized hand pruner or knife. If left to do their tunneling until later in the season (June through September) or if the attack is severe, the only treatable option is chemical control using a soil drench of an insecticide. Looks like you are left using a soil drench.

These pockets of sap coming from the trunk and limbs, accompanied by dieback, are positive indicators of borers. By this time of year and when you see dieback, borer damage is in an advanced stage. Find the Bayer insecticide for borers in fruit trees and apply it as a soil drench around the tree following the label directions.

An irrigation moves this poison inside the tree from the roots. This soil drench treatment allows the “poison” to move throughout the entire tree. You cannot eat any fruit from this tree the following year.

The parts of the tree that are dead will not come alive but hopefully you will see some new growth from the trunk or limbs after about a month. You will know if you are successful or not by October.