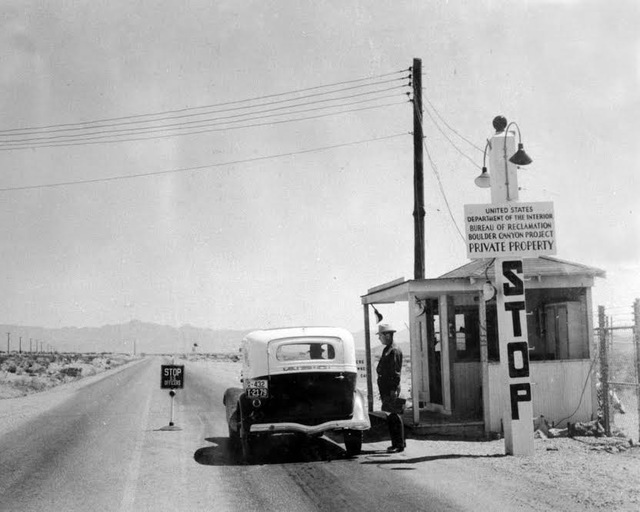 Courtesy photo A pass used to be required to enter Boulder City. An officer is shown checking entrance passes at a checkpoint near Railroad Pass in 1935. 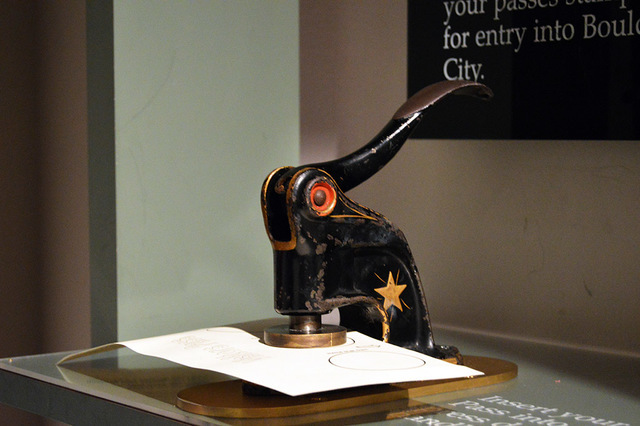 Max Lancaster/Boulder City Review The city manager's stamp machine is shown inside the Boulder City/Hoover Dam Museum. When Hoover Dam was being constructed visitors who wished to stay longer than 24 hours would need to get permission from the city manager, who was in control of all city matters. 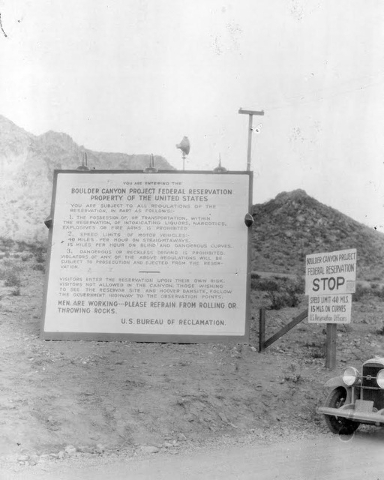 Courtesy photo A list of rules for entering Boulder City in seen in this photo from 1935. These city regulations were also listed on the back of the visitor's entrance pass.

The year is 1933, and visitors and prospective workers from all over the United States are looking to enter the settlement housing the men and women who are working on what was then called the Boulder Dam.

The federally owned plot of land, however, had a number of rules limiting the number of people allowed to enter the housing settlement known today as Boulder City. Visitors were required to obtain a pass allowing them access to the city for 24 hours.

Fast-forward 83 years later and no pass is required to enter Boulder City, but take a visit to the Boulder City/Hoover Dam Museum at 1305 Arizona Street, and you will get a replica of the same passes used by visitors in the early days of Hoover Dam.

The museum started doing the replica entrance passes in 2000.

“The pass was really a way to make the museum more hands-on for the people who visit,” said the museum’s collections manager, Shirl Naegle. “The passes are a mechanism to engage visitors and make them feel as if they are entering Boulder City back when the dam was being built.”

“Before you could get a 24-hour pass, they used to check your car and search you,” Naegle said. “I don’t know how many people who visited the city were turned away, but I do know that everyone gets a pass at the museum.”

The passes are not exact replicas of the ones visitors received back in 1933, but they try to look as authentic as possible. The artificial passes feature the same wording as the originals and a place where the Boulder City manager would stamp his name if you received permission to stay in town for more than 24 hours.

As you pass through the museum, there are places to have your pass embossed with the city manager’s signature for an extended stay, permission to enter the city itself and vote for your preference of the dam’s name.

Naegle said the museum curators who created the stamps were incredibly smart to think of such an interactive idea.

“I think it required a great amount of foresight to create this pass as well as the many other ways the museum helps people interact with history,” Naegle said. “We are still getting positive feedback about the passes, and we have had them for almost 20 years.”

One of the reasons the passes are so popular is because of the museum scavenger hunt on the back. The hunt allows museum visitors to really soak in the museum’s information in order to find the answers to Hoover Dam/Boulder City history questions like, “How much did it cost to rent a hand washing machine for two hours?” and “What did Frank Crowe think every man needed in his pocket?”

Frank Crowe was the general manager of Six Cos., which built Hoover Dam.

Naegle said the scavenger hunt is a huge hit for people who really like to look at every inch of the museum.

“I have seen people look at every picture and read every word just so they can finish the scavenger hunt,” he said. “The museum prides itself on being interactive for everyone, and the scavenger hunt is a lot of fun for people.”

Boulder City resident Amy Smiecinski said that the scavenger hunt made her experience at the museum more enticing.

“I think the whole idea of the pass is really clever,” she said. “It is just a piece of paper, but it tells us so much about old Boulder City. The whole thing is just really simple, efficient and fun.”