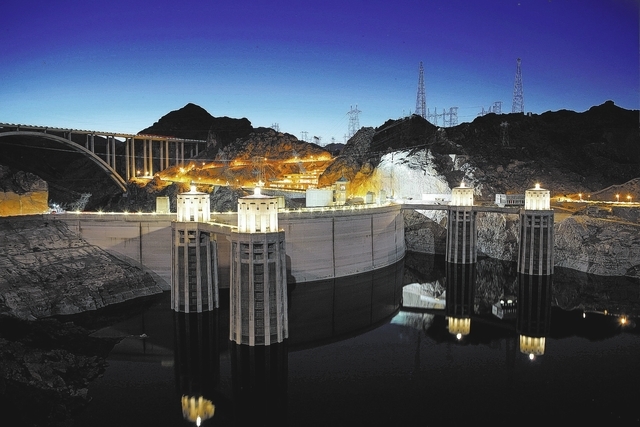 Ask practically any resident of Boulder City and he or she will be able to give you a glimpse of the citys history and how important Hoover Dam is to its past, present and future.

From the citys official seal to numerous business and organization logos, images of the dam are omnipresent. In fact, many people pride themselves on living in the town that built Hoover Dam.

Yet, for those who dont live in the city, Southern Nevada or even the western United States, knowledge of its existence and its impact on the region are often minimal or nonexistent.

That is about to change.

Through the National Endowment for the Humanities, more than 70 educators will descend upon the community for two weeks in July to learn about Hoover Dam and how it shaped the American West.

Michael Green, an associate professor of history at UNLV who considers himself an honorary Boulder City resident, is co-directing the program along with Anthony Arrigo, an assistant professor of English at the University of Massachusetts, Dartmouth and author of the book Imaging Hoover Dam: The Making of a Cultural Icon.

According to Green, the intent is to make those who teach sixth- through 12th-graders more aware of the dam and how its impact on area could be incorporated into lessons for their students.

Its a topic Green is well aware of through his work at UNLV, where he teaches history courses on 19th-century America, and on Nevada and Las Vegas. He also has co-authored a middle school textbook, Nevada: A Journey of Discovery, as well as written or co-written seven other books including Nevada: A History of the Silver State.

While here, the teachers will examine issues of the early 20th century through the lens of the construction of Hoover Dam. Topics such as politics, economics, labor history, civil rights, U.S. water policy and the westward migration will be discussed along with the construction process of the dam itself, its architecture and its operation.

In addition to lectures, each one-week workshop will include the opportunity to examine letters, photographs and oral histories along with field trips to the dam, Lake Mead National Recreation Area and several area museums.

Although the Hoover Dam and its importance on development in the Southwest is a common topic in local classrooms, those who live in the eastern half of the country dont include it in their curriculum.

Yet, according to Green, it could easily be incorporated into lessons about the Great Depression, the rise of the Sunbelt and social and cultural issues.

For example, if a teacher taught about the Tennessee Valley Authority, this would be another project with the same type of purpose, he said. Learning about the dam and water is especially timely now with environmental issues such as climate change, he added.

The National Endowment for Humanities regularly offers educational workshops for teachers, each of which includes a stipend to help offset traveling and lodging expenses. More than 200 teachers applied for the 72 spots.

This will be the first workshop of its kind in this neck of the woods, Green said, adding he is excited about showcasing Hoover Dam and the Western U.S. and hopes this is just the first of many.

Historically, the West, particularly the Southwest, hasnt gotten so much attention. Its hard to put together programs like this because everything is so spread out.

Though the vast spaces are part of the areas attraction, those same distances can work against us.

Green said he hopes area residents will reach out to the visiting educators, offering their own perspectives on the community, as well as hospitality.

For more information about the workshop or the teachers visit, contact Green at michael.green@unlv.edu.