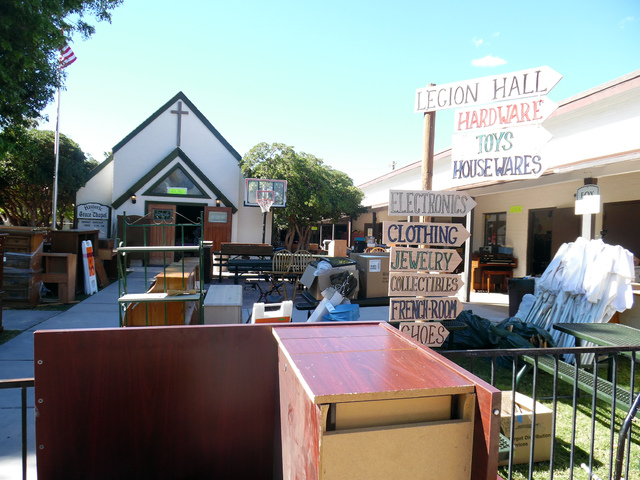 Hunter Terry/Boulder City Review Volunteers are preparing Grace Community Church for the 69th annual Country Store, where thousands of visitors will have access to deals on thousands of donated items Friday and Saturday.

Boulder City is a popular destination for pickers and value shoppers all year long thanks to the array of antique shops, but this weekend Grace Community Church will take center stage of the vintage scene as it hosts the 69th annual Country Store.

Every year, from February until mid-October, Boulder City’s oldest church takes in thousands of donations from area residents in preparation for the Friday and Saturday when all those items go on sale.

For the past week, dozens of church members and volunteers have spent most of each day organizing the items into 17 departments, from furniture and electronics to collectibles, holiday decor and antiques. With the offerings filling a dozen rooms and overflowing out of four buildings, there is sure to be something for almost anyone, according to longtime Boulder City resident Jack Rants, who has been a mainstay at the Country Store for decades, first as a shopper and in more recent decades as an organizer.

“When the sale first started, it was just a few ladies in the basement selling jams and such,” Rants said. “My wife and I first started coming soon after, back when we were still just in high school, looking for Halloween costumes. Over the years it has grown so much it’s hard to believe it’s the same thing.”

What began with humble origins has become such a large event that the church has had to build a garage to receive and store items, rent storage spaces to keep the stock during the year and take over the neighboring American Legion building during the week to make room to put everything on display.

“It’s really amazing what the event has become, there will be well over a thousand people here over the weekend,” Rants said. “Many of the same people come every year, lots of them from out of town and even out of state. It really brings people together.”

The Country Store is the perfect place to find some gifts for the holidays, a treasure you didn’t know you were missing or even to furnish your entire home, and according to Janet Self, one of the co-chairs of the event, it wouldn’t be possible without the help of the community.

“Over the week that we are putting everything together and running the store, we’ll be relying on more than 200 volunteers,” Self said. “When it all comes together, we have a tradition that runs through generations; people that came as kids now bringing their kids, and even their grandkids. There’s just so much great stuff. We’ve had hospital equipment, fine art, Victorian antiques and even a boat.”

The Country Store serves as a fundraiser for the church, which then disburses the money to a number of missions, including Grace Christian Academy, Lend a Hand and Emergency Aid of Boulder City.

Though the first day is generally busier, the best deals are often to be had on Saturday, according to church office manager Jan Liebhauser, since everything that is left at closing time will be loaded onto trucks and donated to the Salvation Army.