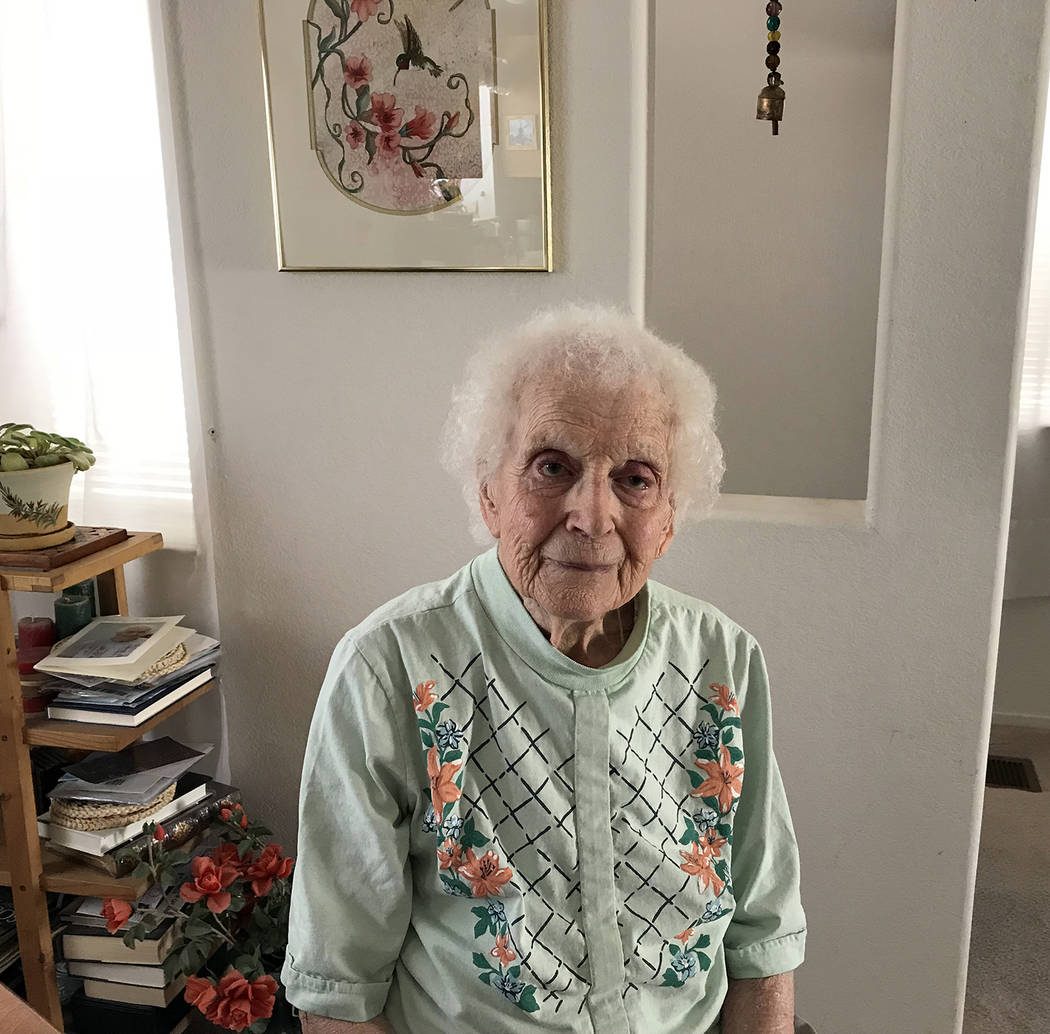 One hundred years ago, World War I was being waged in Europe, daylight saving time was enacted, the fortune cookie was introduced and Boulder City resident Eleanor Beckert was born in Lansing, Michigan.

Today, March 29, marks her 100th birthday, though she has spent much of the month celebrating with family and friends.

A member of the Desert Quilters, Beckert was surprised with a party at this month’s meeting.

“I wasn’t going to go because I had a handyman coming. But someone came and got me,” she said.

The session seemed to be normal as usual, until it came time for show and tell. One of the club’s members began reading about events that happened in 1918 and “pretty soon here comes a great big cake,” she said.

It was her second party of the week. She also had been crowned queen during a potluck at the community where she lives.

Beckert smiled at the thought of the party, especially in telling how the candles on her cake relit themselves after she blew them out.

She also was the guest of honor after Sunday services at Grace Community Church and by fellow members of her Learn to Stretch exercise group.

Beckert credits regular exercise, along with staying active, learning new things and being surrounded by people, as a key to her longevity.

Her three nieces came for a weeklong celebration that included a birthday dinner at her home.

Beckert and her husband, Wilhelm, a World War II veteran, had no children. She said they enjoyed traveling and taking Elderhostel/Road Scholar classes.

They met when Beckert, who was doing graduate work on plant diseases, enrolled in a class to learn about forest tree diseases. Wilhelm Beckert was a forester and was taking the class along with fellow foresters. Eleanor was the only woman in the class.

“One man came up to me and asked, ‘What are you doing here?’” she recalls.

That man was her future husband.

They teamed up to share their knowledge: her about plant diseases and him about trees and forests. She said they both passed the class, with Wilhelm earning a 98 on the final exam and her earning a 95.

She said he gave her his pin on Valentine’s Day, and they were married for 57 years before his death 18 years ago.

Beckert worked as a bacteriologist for Michigan’s Department of Health. They also lived in Oregon, Idaho and California before moving to Boulder City about 35 years ago.

In addition to her quilting, Beckert is a painter; she belongs to the Boulder City Art Guild. She often interprets her paintings into quilted wall hangings.

She also is an accomplished cellist and performed for more than 25 years with the Henderson Symphony Orchestra, which she helped create.

Beckert said she has seen many changes in the world during her lifetime. She said computers were probably the biggest technological change she has witnessed, but she doesn’t have one and thinks they, along with cellphones, destroyed relationships between people because they affect how people communicate with one another.