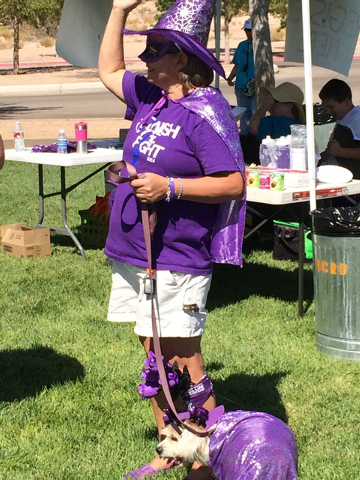 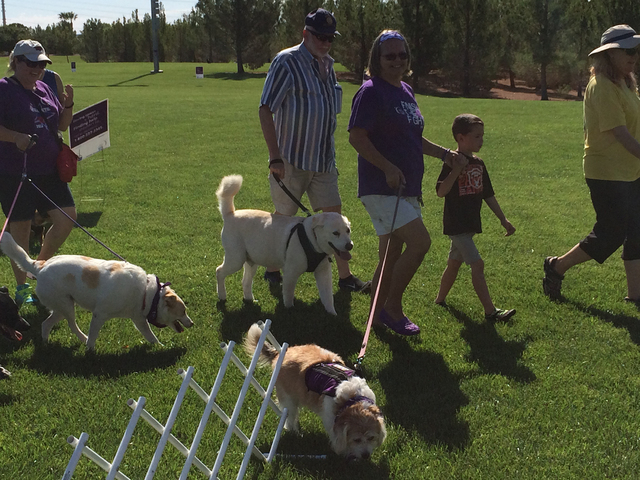 On Saturday the color for the day was purple.

At the Bark for Life event in Veterans’ Memorial Park everyone was sporting purple to support the survivors who came to celebrate their lives — lives that had been tragically altered by various forms of cancer and other debilitating and deadly diseases.

The event was hosted by the Rev. Sandy Johnson of Boulder City United Methodist Fellowship and Charlene Hampton, event lead for the second year.

With the slogan “Create a world with more birthdays,” Bark for Life centered on the surviving humans and many of their four-legged companions. Some of those companions were survivors as well.

Many came for the competitions and exhibits by the various vendors, while others attended the event just to honor friends and loved ones. Fred ViManno brought his dog Delta out just to walk the course and honor his wife, Joyce, who was out of town comforting a family member.

“Joyce is a six-year cancer survivor and finally (there are) no more drugs,” he said.

The event was a part of the American Cancer Society’s Relay For Life program to raise funds for cancer research and was a precursor to the full kickoff event scheduled from 6:30-8 p.m. Oct. 18 at the Boulder City Library Amphitheatre.

Last year, the Bark For Life event had nine competing teams and raised $800, contributing to Relay For Life’s fundraising that finished the yearlong season strong with a total exceeding $28,000 and more than 300 participants. This year’s event already eclipsed last year’s with more than 50 dogs entered and $1,787 raised, according to Johnson.

Some of the participants came to show off their skills at fly ball, flying disc, owner lookalike and best dressed.

With the weather being quite warm, the order of the day was lots of cool water provided by The Water Store. Other sponsors BC Real Estate, True Value Hardware, The Barking Lot, Boulder City United Methodist Fellowship and Dr. George Rosenbaum provided prizes and support.

Mike Pacini helped to emcee the event, heavily teasing Mayor Roger Tobler and Judge Victor Miller during the lookalike contest, even getting the mayor’s children to admit that Tobler resembled his dog Toby.

Good fun and spirited competition was the order of the day and as Hampton said this is “a genuine event to show survivors they are not alone.” Hampton originally started her involvement to “honor a friend and now I just feel as if I need to do more.”

Lee Shanush and her Jack Russel-beagle mix therapy dog Chelsea walked away with the best dressed and lookalike contests sporting Halloween-themed purple witch costumes for both dog and owner.

When asked about her thoughts on the event Johnson said, “This could become a life-changing event for Boulder City and getting people to get out and participate.”

Johnson said she plans to continue to support the programs and be available to help on any levels needed.

“I shaved my head last year to help achieve the milestone. I feel we must eliminate cancer in our lifetime because cancer sucks!”