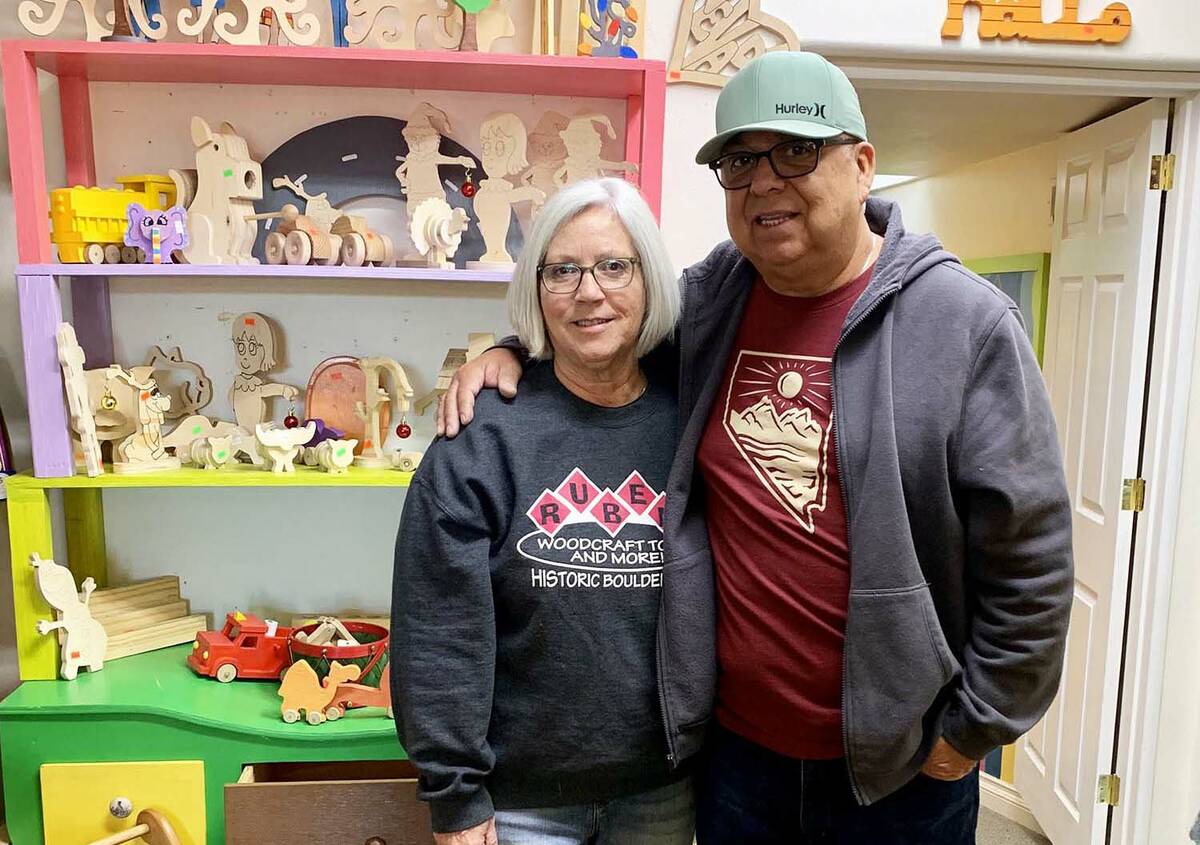 “It’s a funny story,” said Ruben Valdez, a lifelong Boulder City resident and owner of Ruben’s Wood Craft and Toys. “I just turned 50 and the world was turning upside-down in the construction industry, so I retired.”

The newly retired metalworker spent his days practicing a new skill with woodworking and spending time with his parents, who are buried at the Southern Nevada Veterans Memorial Cemetery.

His wife, Dixie, continued working as an educator. She was a kindergarten teacher with the Catholic school system for 17 years before switching to the Clark County School District as a substitute teacher.

“He was doing a lot of woodwork at home and we toyed with the idea of him getting a license and doing farmers’ markets,” she said.

During his time participating in farmers’ markets and visiting his parents, he stumbled upon a space available at 555 Hotel Plaza and was intrigued.

“When I visited Mom and Dad down at the memorial, I found this place for $1 per square foot,” Ruben Valdez said.

The real estate agent told him not to take it, saying, “nobody goes back there” as it wasn’t a storefront. This was perfect for Ruben Valdez because he was looking for peace, quiet and space to concentrate on his woodworking.

“A few months later when she came home from school,” Ruben Valdez said, “I told her, ‘Hey Dixie, our dream came true.’”

She responded with, “It did? What was that?”

The store was mainly closed during their opening year as Dixie Valdez continued working five days a week as an educator and came in only on weekends to run the store.

One year after the store’s opening, as the store had grown in popularity, Dixie retired from teaching and the couple bought the neighboring space at 553 Hotel Plaza to expand the store.

Using his expertise in construction, Ruben Valdez did all the work to combine the two spaces. The couple has been using the combined space as a toy store, wood workshop, resource for supplemental education materials and event space for birthday parties and a young entrepreneurs’ market.

“It’s been fun,” Dixie said. “A good marrying of ideas since I used to teach kindergarten and he was a builder, so it all went together.”