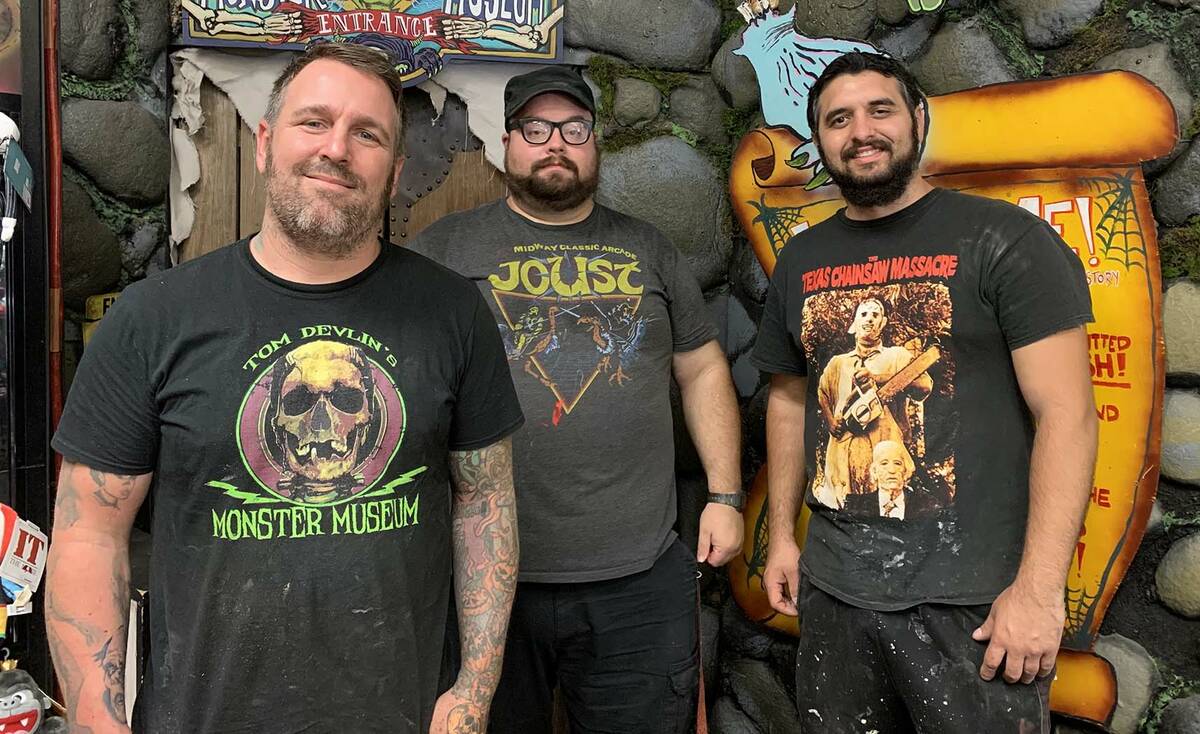 Among those joining Devlin this year for Nightmare at the Museum and The Fright Zone, are Chris Arredondo and Walid Atshe, both of whom have developed avid fan bases for their respective characters, Chippy and Meat Boy.

Now in their second year at the museum on Boulder City Parkway, Devlin said the haunted attractions will be “exceptional.” His team has devoted countless hours creating the world they will inhabit each night.

“Call it a gallery,” he said. “Everything in there is handmade.”

Arredondo said the attraction tells a story as visitors travel through.

“It’s just creepy — even without the actors,” added Atshe.

According to Arredondo, no two visits to the haunted attractions are ever the same. He said Devlin is always making adjustments or adding something new.

“Sometimes in the morning I’m more like a forensic scientist, trying to figure out what has been done with a bucket of latex and a mold.”

Devlin has been making haunted attractions nearly all of his life.

“As a little kid I would make little haunts in my bedroom,” he said.

From there, as he continued to hone his craft, he began working on television shows, movies, haunted houses and supplying theme parks with hair-raising and spine-tingling creations. He opened his museum five years ago to educate visitors about the actors and special effects artists who inhabit the world of monsters and horror characters.

“It’s fun to play monsters,” Atshe said of working at the museum and haunted attractions.

Having the ability to create “cool creatures and make people scared” makes this “the best time of the year,” he said.

Devlin said creating special effects is a life passion for all of them and it began when they were young.

“For horror fans, this is a way of life,” he added.

Devlin said his infatuation with horror films and monsters began when he saw “Child’s Play 2,” the first movie that “scared the pants off me.”

For Arredondo it was Pennywise, a dancing clown who is the most preferred character of the shape-shifting monster in Stephen King’s novel “It,” that drew him into horror movies. Even though he was scared and terrified, he said he was mesmerized by the monsters he saw on screen.

Atshe said he would watch a lot of old monster movies around Halloween, but it wasn’t until he sneaked into his sister’s slumber party to watch a “Friday the 13th” movie that he was officially hooked. From there, his Saturday nights were spent watching horror movies with Count Cool Rider.

The three are joined by about 25 volunteers who spend their October nights giving bone-chilling performances. Arredondo said the volunteers come from all walks of life and include a doctor, lawyer and a police officer.

For these special effects artists, screams and nervous laughter are akin to applause or a standing ovation. And October is their ultimate stage.