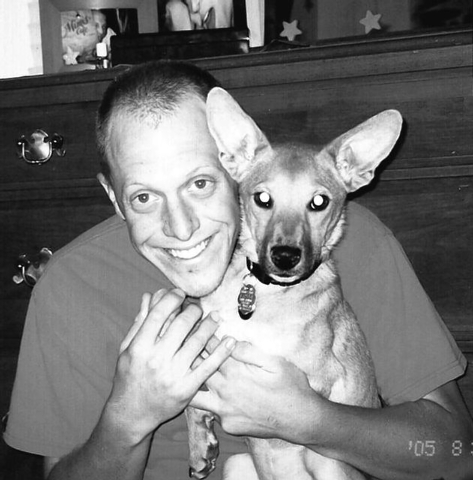 Growing up in Boulder City, the 2002 Boulder City High School graduate considered himself a “normal, all-American kid.” He had a loving family, friends, was an accomplished athlete and had no apparent reason to want to end his life.

But depression doesn’t work on reason, and that’s the message Barrow aims to get across with his book, “Life With Ziggy: A Boy, a Dog, & a Life Saved.”

Barrow, who was found by his parents and rushed to the hospital, survived the suicide attempt. He spent a week in a psychiatric facility, telling himself he was OK. But when he was released, he was not OK.

“It was still a daily battle,” he said. “At some point I decided I needed something that would help me through these hard times, so we decided to adopt a dog.”

Barrow figured that the “unconditional love” of a dog would be therapeutic, but, he said, “what happened was far more therapeutic and helpful than I ever could have imagined.”

At a Las Vegas animal shelter in August 2005, Justin met what he described as an ugly, skinny pit bull and basenji mix that had been found in the desert.

Barrow and his girlfriend took the male dog home, and named it Ziggy. But the relationship was off to a rocky start.

“At first he wanted nothing to do with me,” Barrow said. “He was terrified of me.”

Barrow thought his plan for recovery had backfired, and he even wanted to get rid of Ziggy. But one day, everything changed when Barrow and his girlfriend took Ziggy to the Boulder City Horseman’s Association. For some reason, the dog, who was being chased by chickens, ran past Barrow’s girlfriend and jumped into his arms.

“We had a real breakthrough and it became a real therapeutic relationship,” Barrow said.

At the time, when the sun went down, depression still tugged at Barrow. He said he was an adult who was afraid of the dark. But whenever things got bad, Barrow said Ziggy somehow knew.

“He just intervened at a lot of times when I needed someone to intervene.”

For 15 months, Ziggy helped Barrow “turn a corner” with his depression.

In the book, Barrow said, he even draws a comparison between Ziggy’s appearance and his own mental health.

“As I feel like I’m getting better mentally, he improved physically,” Barrow said.

But in November 2006, life with Ziggy sadly ended, when the dog died from kidney failure.

“He died in my arms,” Barrow said.

When the book ends, Barrow said, things are “not all glitter and rainbows” but “things are going to be OK.”

The story of Ziggy and Barrow, which Barrow said is equally a story of his now-wife, Meagan, was culled from journal entries Barrow began writing while in the psychiatric facility. Barrow said he began writing the book in 2010, but it was never meant for publication.

“Being able to accept these things and share them was a sign to me I’ve recovered,” he said.

But as recently as last month, after receiving a proof copy, he had doubts about publishing. Positive feedback from family members, however, gave him the confidence he needed to follow through.

The book, which Barrow said contains “a lot of insight” about how depression works, as well as information about more traditional suicide-prevention resources, can be purchased at a signing from 10-11 a.m. Saturday at Bicentennial Park, 999 Colorado St. It also is available at Amazon.com.