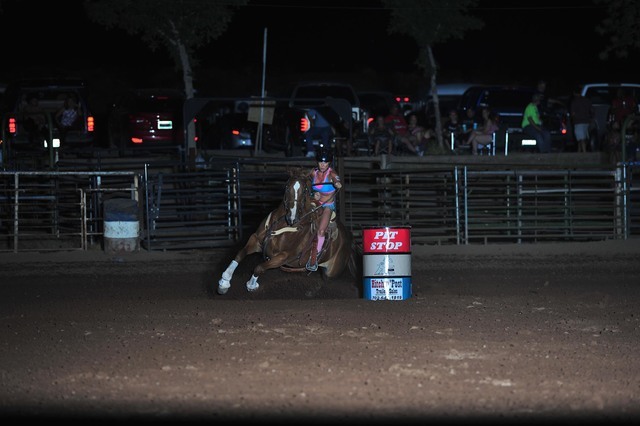 Hooves kicked up plumes of dust while cowboy boots and hats were even more prevalent than the requisite bathing suits as the fourth annual Bikini Barrel Race competition returned to the Boulder City Horsemans Association arena on Saturday night.

The race drew competitors from all over Southern Nevada, as well as Arizona and Utah, with more than 90 women, men and children participating in the event, which began at 8 p.m. and ran deep into the night.

Each rider pushed their quarter horse at breakneck speeds, slowing only to turn tightly around each of the three barrels, before leaning into their mounts and spurring them toward the finish line.

Stop the Clock Barrel Racing put together the event and paid out more than $5,000, distributed among the fastest three riders in each of the five divisions. The winner of each group also received a trophy buckle, including Patty Harrison who put up the evenings fastest time at 14.879 seconds.

The competitors times were broken into divisions so that riders with less experience and their horses traits were considered for winning runs to encourage more people to participate, according to Ashley Cockrum of Stop the Clock.

In addition to the 83 barrel racers in the open event, there also was a youth bracket for those 16 years of age and younger, which featured 14 contestants, a few of whom competed in both events.

The first Bikini Barrel Race competition in the region was held 10 years ago, also at the horsemans association arena, according to Cockrum. Then the event had trouble finding a home, making only an appearance or two in Las Vegas before Stop the Clock took over and established the perennial event in Boulder City four years ago.

This was one of our biggest years ever and I think it turned out great for our riders and our sponsors, Cockrum said. The horsemans association has always been a great place for families and kids to ride, and they have provided the perfect home for this event.