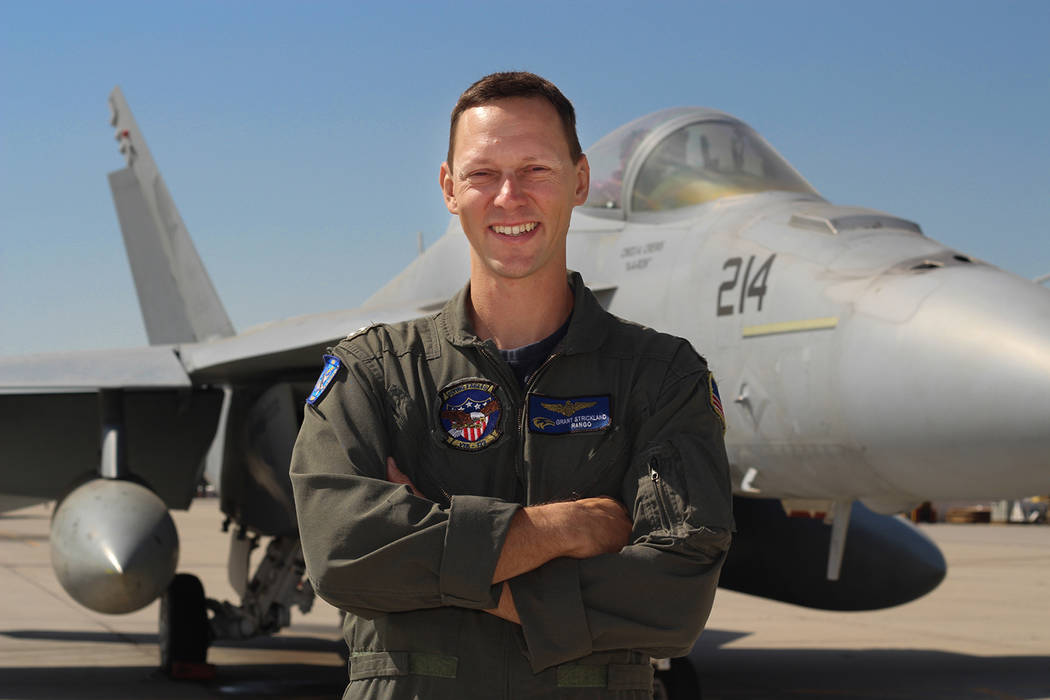 U.S. Navy Lt. Grant Strickland is a pilot with the Flying Eagles of VFA 122, which operates out of Naval Air Station Lemoore in California. He helps train future naval aviators.

Lt. Grant Strickland, a Boulder City native and 2005 Las Vegas Academy graduate, is serving with a U.S. Navy strike fighter squadron that flies one of the world’s most advanced warplanes.

Strickland is a pilot with the Flying Eagles of VFA 122, which operates out of Naval Air Station Lemoore in California, and is responsible for training future naval aviators.

“I have learned to work hard and have a goal,” he said. “I always knew I loved flying.”

Members of VFA 122 work with the F/A 18 Super Hornet, one of the most advanced aircraft in the world. The Super Hornet takes off from and lands on Navy aircraft carriers at sea and is capable of conducting air-to-air combat as well as striking targets on land. It is approximately 61 feet long, has a loaded weight of 51,000 pounds and a max speed of 1,190 miles per hour.

Operating from sea aboard aircraft carriers, the Super Hornet gives the Navy the power to protect America’s interests anywhere, at any time. The versatile jet has the ability to destroy targets hundreds of miles inland, without the need to get another country’s permission to operate within its borders.

“Strike Fighter Wing, U.S. Pacific Fleet, based at Naval Air Station Lemoore, California, is the heart of Naval aviation,” said Capt. James S. Bates, deputy commodore, Strike Fighter Wing, U.S. Pacific. “The sailors assigned to SFWP always exceed expectations and produce amazing results through teamwork and dedication to their department, squadron, the U.S. Navy and their family. Naval aviation is a challenging occupation, but our sailors work day in and day out to provide fully mission capable aircraft and fully qualified aircrew to ensure leadership is able to answer national level tasking. I am humbled to be able to lead the sailors of SFWP and I am proud to call Lemoore my home.”

Strickland has military ties with family members who have previously served and said he is honored to carry on the family tradition. Not only does his brother also serve in the Navy, he serves close by.

“My brother is actually in my squadron,” Strickland said.

Strickland said he is also proud of receiving the Navy Achievement Medal last year for running Rhino Sports and getting everyone on the flight line together with their families over a two-week period.

As a member of one of the U.S. Navy’s most relied-upon assets, Strickland and other sailors know they are part of a legacy that will last beyond their lifetimes providing the Navy the nation needs.

“Serving in the Navy instills in me a lot of pride, respect and sacrifice,” Strickland said. “There is also a lot of teamwork.”

Electa Berassa is a mass communication specialist in the Navy Office of Community Outreach.