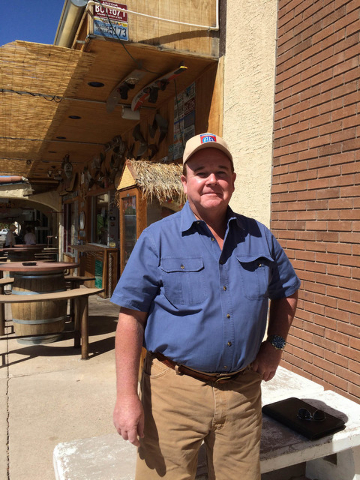 Gregory Hall, a retired FBI special agent and former U.S. Army paratrooper assigned to the 82nd Airborne Division, stands outside the World Famous Coffee Cup. The Boulder City resident was challenged to solve the mystery of D.B. Cooper and recently penned an article that casts some doubt on the existing information known about the 45-year-old skyjacking case. Hali Bernstein Saylor/Boulder City Review

One Boulder City man believes the Silver State has more of a connection to the infamous D.B. Cooper case than just the fact that a Nevada resident has come up with a new theory about the mysterious skyjackers identity and how he managed to elude officials for more than 40 years.

Gregory Hall, a retired FBI special agent and former Army paratrooper, believes officials should have been looking for Cooper just north of Reno, Nevada, instead of focusing their efforts in southern Washington.

The Boulder City resident recently released his theory in an article he wrote and published on his website. He said he came up with his ideas about the skyjacking by looking at the caper from a military perspective.

Though he doesnt come up with a specific suspect, he said his theory offers practical details of how the skyjacking could have been executed and the type of person capable of doing it.

Even before I got on the internet and did any research, I put together an Op-Plan. It only took 10-15 minutes; it was so academic.

Hall said the operational plan put a military spin on the skyjacking, using information from his experience with airborne/parachute operations. The plan involves several steps, one of which was the need for a false insertion or diversion prior to the actual jump.

According to Hall, Coopers diversion was so successful that people have been searching for him or remnants of his jump in the wrong location since that Nov. 24, 1971, evening when the man parachuted out of a Seattle-bound Boeing 727 airplane wearing a business suit and sunglasses after demanding $200,000 in cash.

He also believes that officials may have overlooked some key points that could have helped solve the case as many of its loose ends fit nicely into his hypothesis.

The basic premise of Halls theory is that the man identified as D.B. Cooper was an active-duty member of the military, about 40 years old, stationed outside the United States when the caper was committed but was visiting home for the Thanksgiving holiday.

As an experienced paratrooper, he easily survived the jump, was well-versed on the Boeing 727 and knew the rear staircase could be used as a jumping off point during flight since it had been done in southeast Asia prior to the skyjacking, though this information was not known to the general public, commercial pilots or the Federal Aviation Administration. Additionally, he was familiar with the Seattle area, possible having been stationed at Fort Lewis or McChord Air Force Base.

After landing safely, Cooper would have stashed the ransom money and hitchhiked a ride into town, explaining that he was on a business trip and that his car had broken down. In the morning, after renting a car, he would retrieve the ransom money, proceed home to visit family for the holiday and ship the money to his overseas duty assignment.

For the remainder of our overseas deployment, we know we can use the money off base with very little chance of the U.S. government being able to track the bills, Hall wrote in his article D.B. Cooper, Step Out of the Shadow.

Im surprised that the theory has not surfaced before, said the 24-year veteran. I think he presents in a very rational, orderly form his theory that someone with military, parachute experience could have very well been the person who committed this.

The mystery of what happened to D.B. Cooper has captivated Americans since it happened, with numerous movies and television shows about the case, including a two-part special on the History Channel earlier this month.

Though Halls theory was not included in the History Channels program on the caper that aired earlier this month or book written by investigative journalist Tom Colbert, they happened to coincide with the clearance he received from the FBI to share his thoughts on the case.

As a retired agent, Hall has to submit anything he writes for a prepublication review to ensure that sensitive or confidential information or investigation processes are not disclosed. Oddly enough, the review, which is only supposed to take 30 days, took about six weeks because Halls manuscript disappeared at FBI headquarters for a month before showing up on the reviewers desk.

Hall started his research about four years ago after a casual conversation with a group of retired veterans who gather early most mornings at the World Famous Coffee Cup for breakfast. Hall, who dines at the restaurant a couple of times a week, said that one day in 2012 he happened to get there early enough to get a seat at the table adjacent to the group.

They were talking about D.B. Cooper and asked him his thoughts on the case, especially since he was a former Army paratrooper and retired FBI agent. As they were leaving, one of the men challenged him to solve the case.

Ironically, just last week the FBI announced it was administratively closing its investigation on the 45-year-old case.

Still, Hall said he hopes that anyone who reads his article and knows someone who might fit the profile he created call the FBIs Seattle field office so that D.B. Cooper could finally be identified and the case closed.