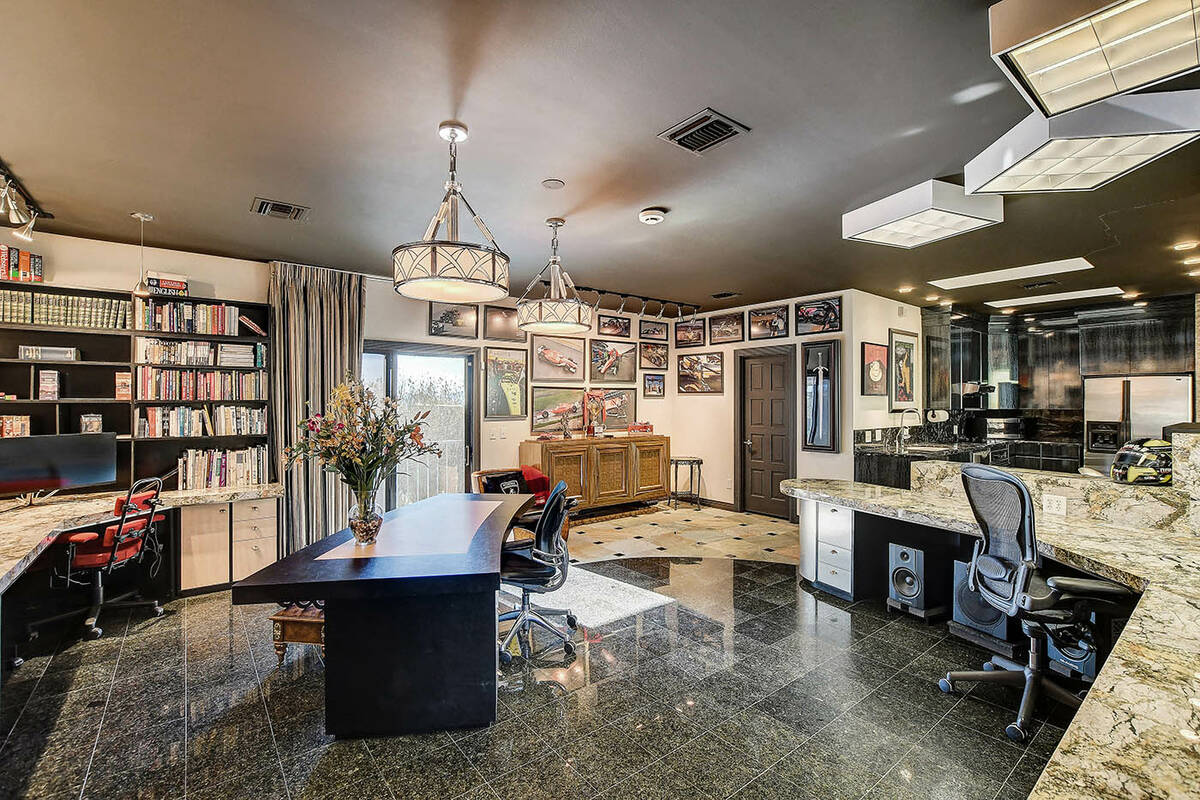 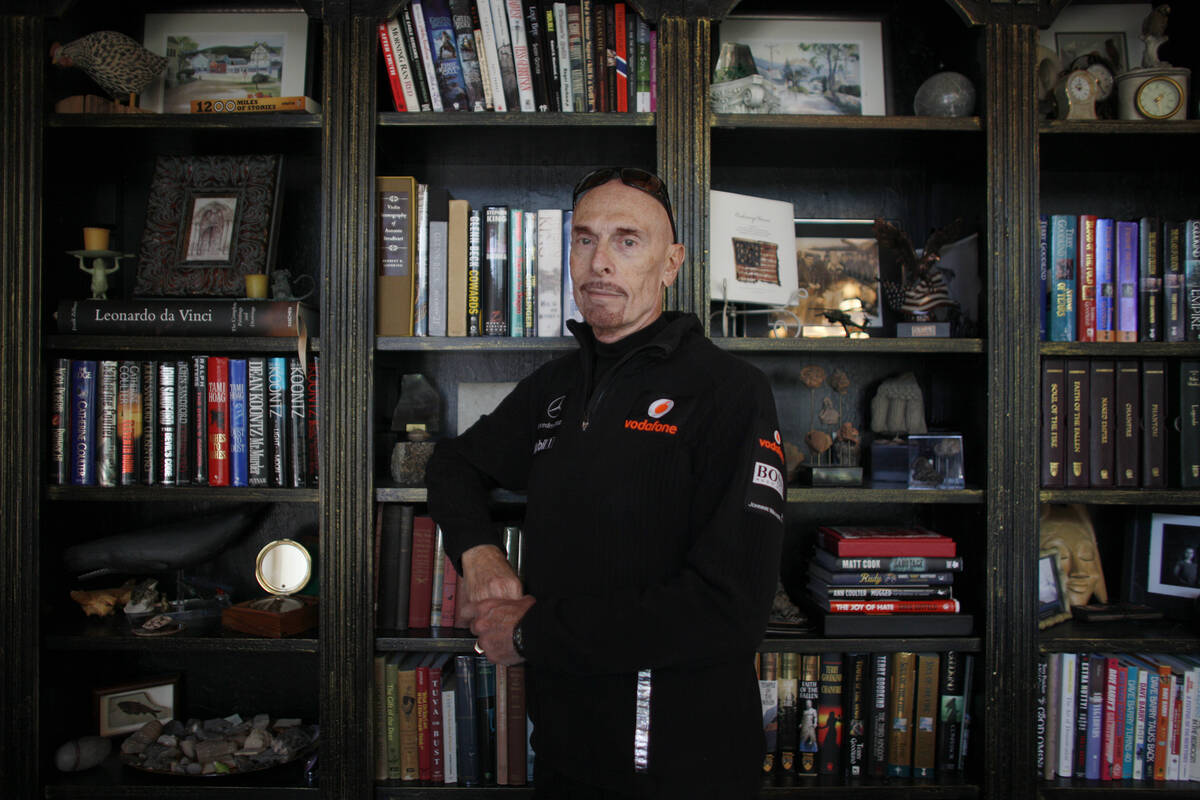 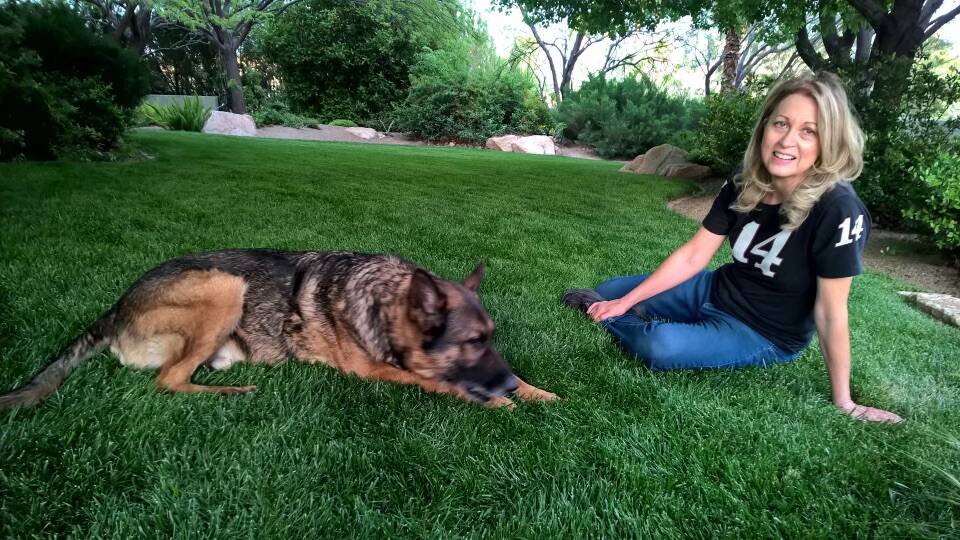 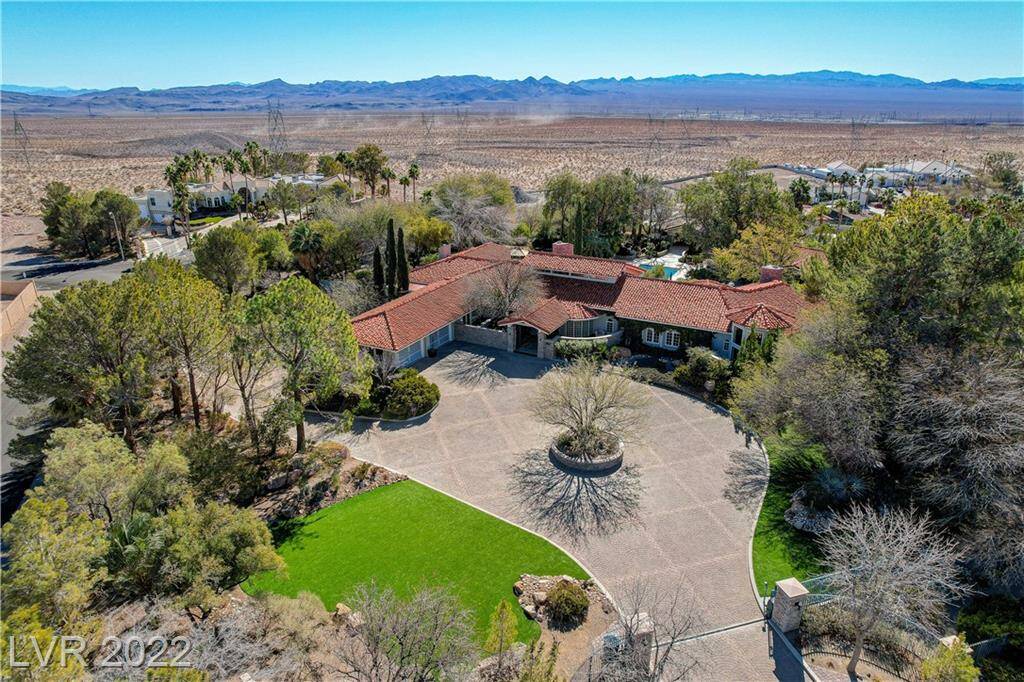 (Photo courtesy of Amber Bartholomew) The exterior of the Goodkind's Boulder City estate. 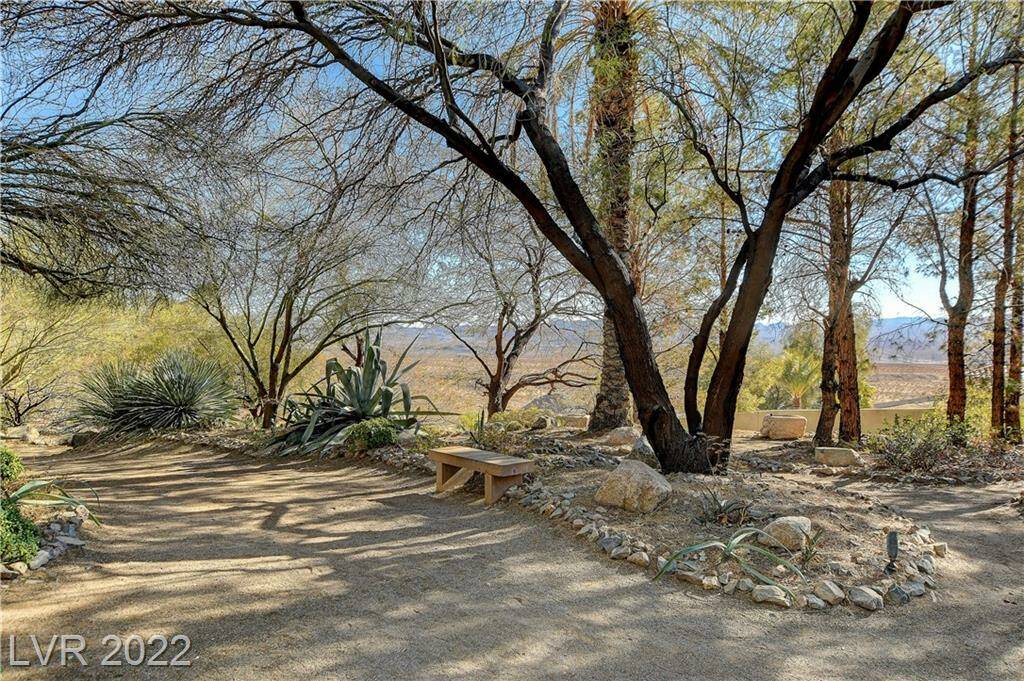 (Photo courtesy of Amber Bartholomew) Trails were included along the property for Terry and Jeri Goodkind to take a stroll without leaving the comfort of their own home. 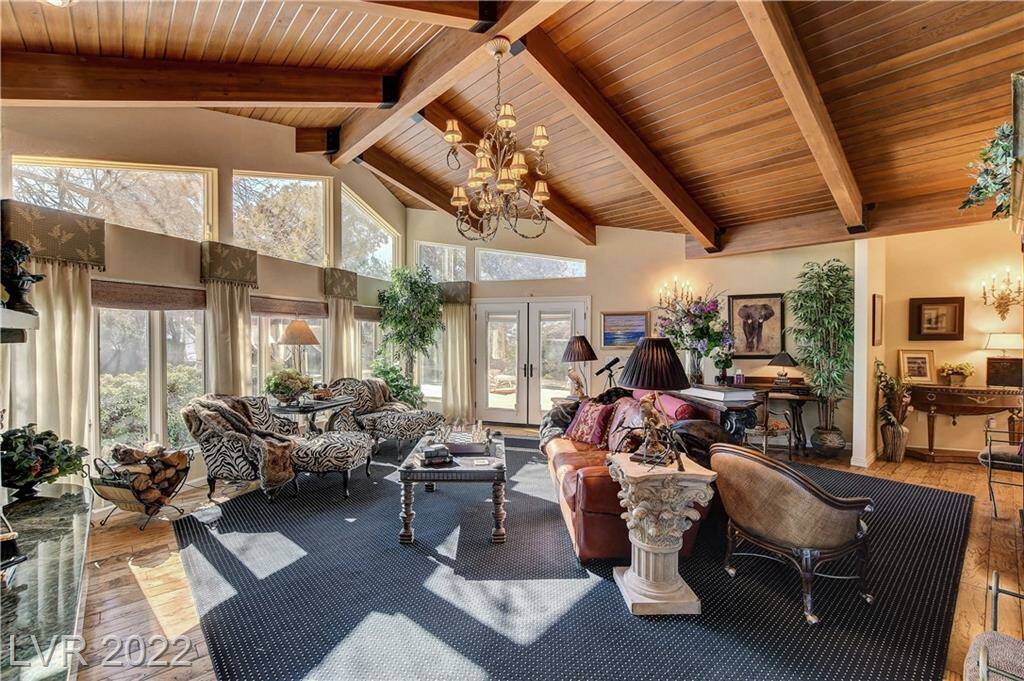 (Photo courtesy of Amber Bartholomew) The great room of the Goodkind estate filled with lots of natural lighting. 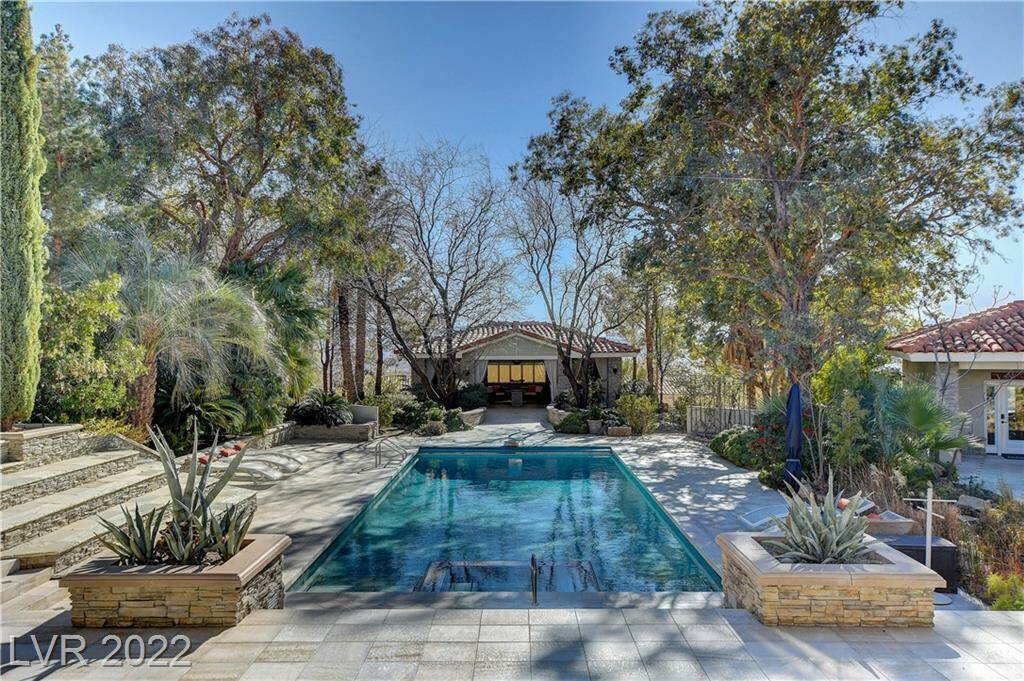 (Photo courtesy of Amber Bartholomew) The estate's saltwater in-ground pool is complete with a pool house and solar heating. 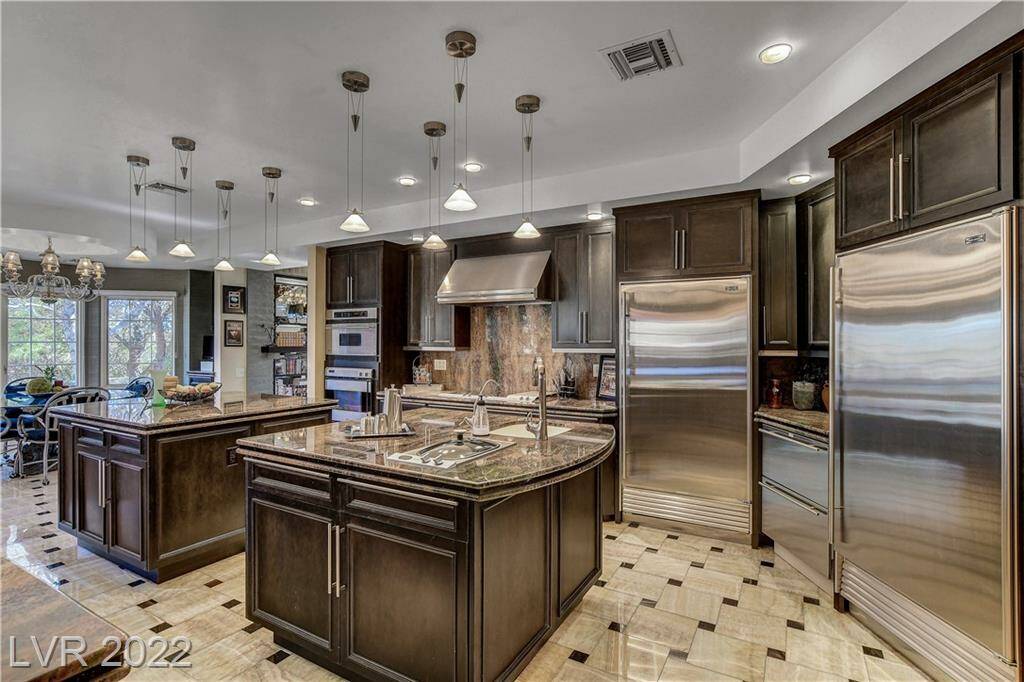 (Photo courtesy of Amber Bartholomew) A full chef's kitchen is one of the highlights of the estate. 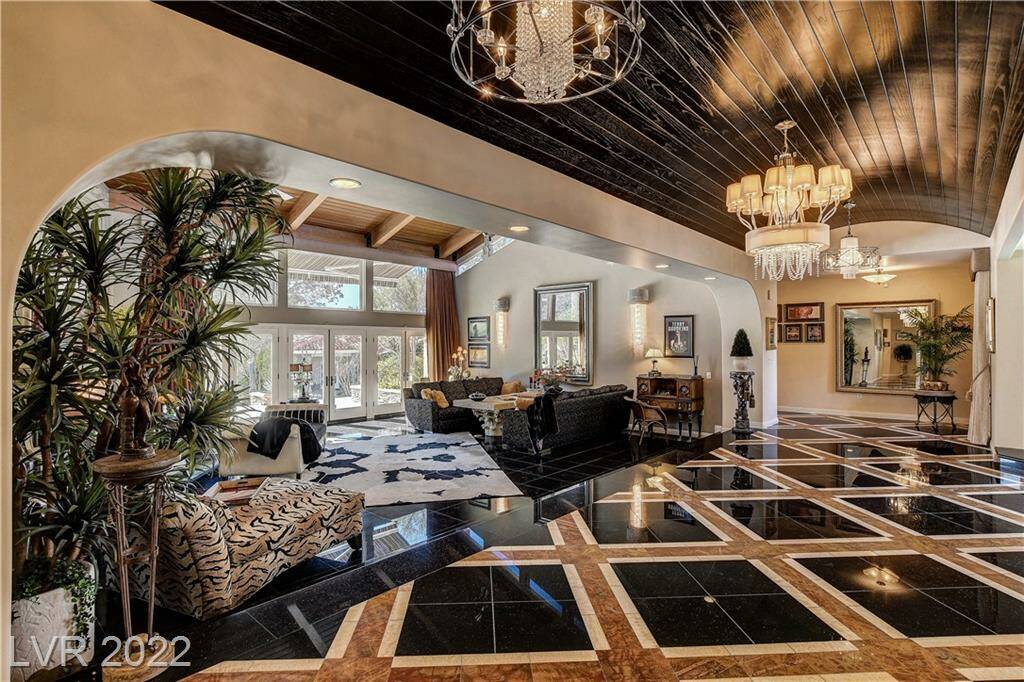 (Photo courtesy of Amber Bartholomew) The living room of the estate has onyx, marble and granite flooring.

Best known for the fantasy series “The Sword of Truth,” the late novelist Terry Goodkind’s creative expression is evident throughout his Boulder City estate.

“He was one of those people endowed with tons of creativity and talent,” his widow, Jeri Goodkind, said. “Not only was he an international best-selling author, but he was also an artist, violin maker, a race car driver and a private pilot. The harder it was, the more he wanted to do it.”

“It’s just a lot for me right now,” said Jeri Goodkind, who is looking to downsize.

“They call this area B-hill,” Bartholomew said. “They are 80,000-square-foot lots, which are unique because it’s the only area in Boulder with large zoning.”

Lush, wooded grounds surround the estate, providing immense privacy. She said the pair built walking trails around the property so they wouldn’t have to leave if they wanted to take a stroll. The couple’s friends would often refer to the estate as “the bubble” because of the privacy it offered.

“It just feels like a sanctuary,” said Jeri Goodkind. “Everybody always says they just feel so calm and restful when you’re here. It’s really unlike a lot of properties I’ve ever seen.

“When we first moved here, the woods were impenetrable,” Jeri Goodkind said. “I try and walk every day with my cat. She loves to go with me.”

The black “talkative” feline is famous among Terry Goodkind’s fans. Several photos display her sitting on his lap while he worked.

“She was Terry’s cat. His fans started calling her Shota, a witch woman in one of his fantasy series,” Jeri Goodkind said. “Her real name is Kitty.”

“She’s a heroine from his books,” Jeri Goodkind said.

After purchasing the homes, the couple spared no expense in the nine-month renovation.

“The house was different from any other house we’ve seen,” Jeri Goodkind said. “It’s in this embracing shape, so unique and beautiful. We knew it deserved to be renovated.”

The extensive interior renovation involved removing two large decorative pillars in the main living area and extending the steps across for a cleaner aesthetic into the sunken living space. The couple restructured and updated the kitchen and primary bedroom and bath. The whole home was freshened with paint and distinctive light fixtures.

“We touched everything,” Jeri Goodkind said. “And we decided everything together. If one of us didn’t like it, we didn’t do it.”

Terry Goodkind added his creative flair into designing the custom polished stone floor that flows throughout the home.

“Our floors have this distinctive pattern of onyx, marble and granite that Terry designed,” Jeri Goodkind said. “All the veining in the onyx is book matched. I love it.”

He also designed the beveled edge for the granite counters installed in the butler’s pantry and kitchen.

The fully renovated kitchen has black cabinetry, dual islands with granite countertops, stainless steel appliances, a breakfast nook and access to a private patio with an outdoor barbecue area.

A chandelier hanging over the breakfast nook is the only design element original to the space. Jeri Goodkind repurposed the piece with paint and new shades to match the design.

The couple visioned the primary suite as a private sanctuary, removing saloon-style doors and converting two closets into one oversized walk-in closet.

The primary bath was taken down to the studs and restructured. A cast iron tub is the only remnant of the original space. Dual sinks with stone counters and a marble tub surround were added.

“My desk faces the window,” Jeri Goodkind said. “We have a water fountain outside where hummingbirds and other birds take baths. It’s so fun to watch.”

The couple designed the 1,712-square-foot second home to serve as Terry Goodkind’s private sanctuary, where he spent 12 to 14 hours most days crafting his international bestsellers.

His “Sword of Truth” series spanned 17 books, sold more than 25 million copies worldwide, and ran for two seasons as an ABC-adapted television series “Legend of the Seeker.” In addition to the fantasy genre, Terry Goodkind wrote several contemporary novels, such as the 2009 thriller “The Law of Nines.”

Creating the sanctuary meant demolishing the interior down to the studs. Removing an enclosed outdated kitchen opened the entire main living area.

Sleek and linear, the replacement kitchen has an Orthocera granite countertop and backsplash. The unusual granite is a prehistoric fossil quarried from the ancient Mediterranean Seabed. The lower level features a professional fitness room. An adjacent area features a workbench designed by Terry Goodkind to craft violins.

“Terry didn’t play, he built them,” Jeri Goodkind said. “He learned from a world-famous violin maker. It would take 400 hours to make one.

It was his fallback,” she added. “If he couldn’t make it writing, that’s what he was going to do.”

The resort-style exterior connects the two homes. The grounds feature an onyx stone pool deck and an oversized swimming pool.

Avid pet lovers, they created an enclosed pet area that runs between the two properties. Their beloved German Shepard Zimmer, who passed away a few months before Terry, used it to go back and forth.

Over the years, the couple replaced the existing stucco walls with stacked stone and fenced the entire property. They installed electronic gates on all three driveways entering the property, creating a higher level of security.

“We were together almost 50 years and spent only two days apart.”

Jeri Goodkind said she plans to stay in the Boulder City area but is sad to sell the estate.

“It’s just that there’s no other house like it, especially in Boulder City.”