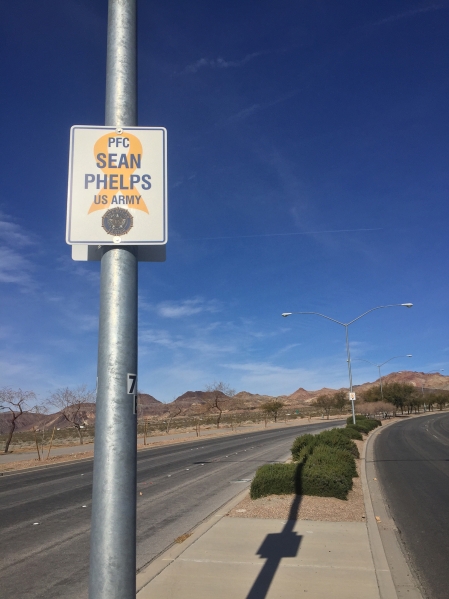 Anyone who has lived in Boulder City long enough can attest to the strong bond the city has with its veterans and active-duty members of the military. From the Nevada State Veterans Home, which is the only skilled nursing home in the state for veterans, to the Southern Nevada Veterans Memorial Cemetery, Boulder City has remained supportive in one way or another.

For those who drive down Veterans Memorial Drive, another example of how the city shows its support to those active in the military becomes visible.

Yellow ribbon signs sponsored by the American Legion, Post 31 of Boulder City, adorn the light posts in the center median of the street. The signs are meant to recognize anyone from Boulder City who is currently serving in the military.

“The great thing is we know all the boys and girls from Boulder City that we have in service. I started it for them,” said Joe Rowe, founder of the Yellow Ribbon project.

Rowe got the idea from another member of the American Legion, Glenn Nakadate, after he visited Butte, Mont., and admired the yellow ribbons they had around their city honoring their active military members.

Rowe said he genuinely appreciated the recognition the yellow ribbons brought to those serving in the war, so he decided to bring the caring gesture to Boulder City.

“There’s a reason we put these signs down Veterans Memorial Drive — so we can show the city how much we love them and how much we want to take care of them,” Rowe said.

It was a difficult task at first to get help from the city to put the signs up on the light posts though. According to Rowe, he had to go in front of the City Council and ask for its help to get the signs on the light posts. Rowe explained that the American Legion had no way of getting ladders that high up and thankfully council members agreed to help him out with the project.

Caesars Palace awarded a $2,000 grant to the American Legion in order to get the ball the rolling on the project. Each family is charged a small fee to have a sign placed honoring a soldier.

Currently, there are 103 signs decorating Veterans Memorial Drive. Once a soldier comes back from deployment, his or her yellow ribbon sign is given back to the family to keep. If the soldier dies while on active duty, the ribbon remains on display forever.

“We want people to remember about what this program is. We want them to get ahold of us if they have a new active-duty family member or if they have somebody with a sign and they have updated information — whether they are out of the service or promoted,” said Dawn Walker, second vice commander for Post 31.

For more questions on how to acquire a yellow ribbon sign, call 702-293-6374 or stop by the American Legion post at 508 California Ave.