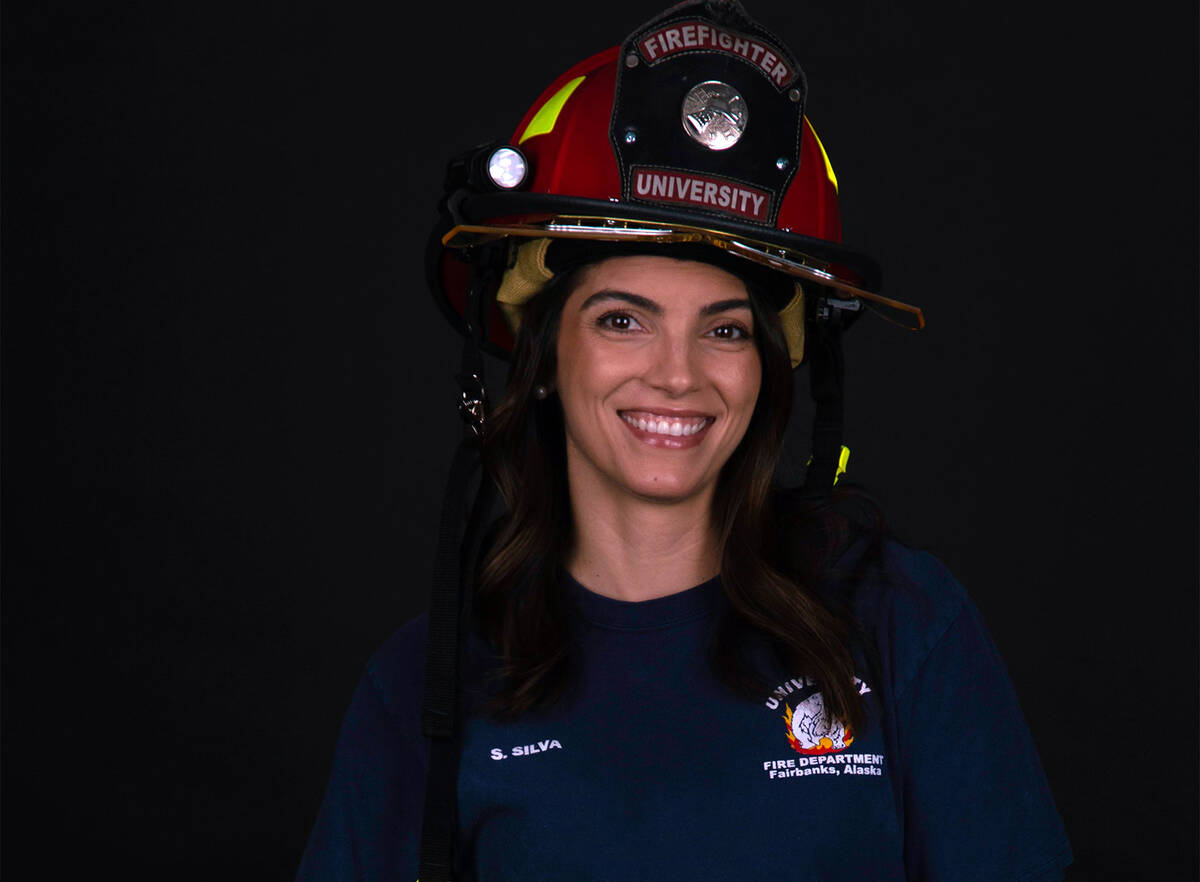 (Kyle McClendon) Shayla Silva, a captain with University Fire Department in Fairbanks, Alaska, recently spent time in Boulder City and Clark County completing her paramedic training. In addition to helping those in emergency situations, she is helping train the next generation of firefighters and emergency medical services providers. 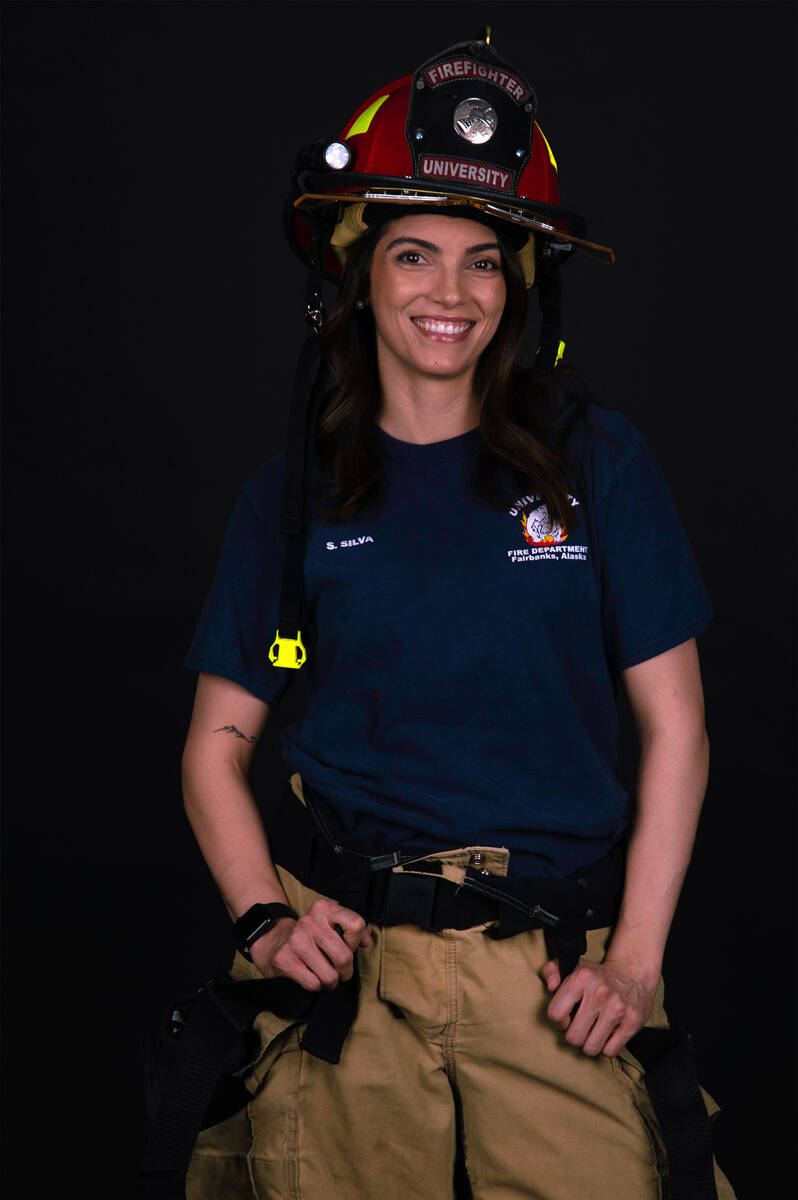 (Kyle McClendon) Shayla Silva, a captain with University Fire Department in Fairbanks, Alaska, recently spent time in Boulder City and Clark County completing her paramedic training. In addition to helping those in emergency situations, she is helping train the next generation of firefighters and emergency medical services providers.

Tattooed on Shayla Silva’s inner wrist is a small semicolon. It’s so small that it could easily be missed. But for Silva it’s a constant reminder to take a breath and pause for a moment before moving forward and tackling the next challenge that comes her way.

Challenging situations are nothing new to Silva, a paramedic in her native Fairbanks, Alaska, who recently spent six weeks in Boulder City and Clark County for an externship with Las Vegas firefighters to complete her training.

The experience, she said, like many others, changed her profoundly.

As a former Miss Alaska International, one might expect her life to be as shiny and glamorous as the crown she wore in 2015. The truth is far from that, she said.

Silva, 33, is a survivor of date assault, she suffered a broken back that caused her to lose a full-ride scholarship and promising career in nursing, and went through “a season” where she contemplated suicide.

Instead of asking why these things happened to her, she now knows they were meant to teach her and help her as she responds to assault and domestic violence calls or life and death situations.

“In my career I’ve seen things no one should ever see,” she said.

Silva works at University Fire Department in Fairbanks, which provides “professional fire, rescue and medical services while developing leaders in tomorrow’s emergency services workforce,” according to its website.

She was recently appointed captain and said she is eager to put her new red captain’s hat back on. She said that helping others while teaching younger firefighters and emergency service providers what they need to know to do their jobs successfully and with integrity is her true purpose and passion in life.

Finding that purpose and passion was something she struggled with since she had to leave the nursing program when she broke her back and returned home to heal.

After recovering from her injury, she obtained a degree in global logistics and supply chain management and accepted a position with BP Alaska in material management as a logistics analyst.

But the job was not “where my dream is,” so she quit, sold all her belongings and moved to Grand Junction, Colorado, to go back to school and become a full-time caregiver to her godfather.

Silva said when she wasn’t able to get into the nursing program her father, a lifelong smoke jumper, suggested she look into a job with the fire department there because it would be a good stepping stone to nursing.

She was accepted into the academy at Clifton Fire Protection District in late 2018 and discovered that she loved the work.

“I realized that my passion was to help people in the back of an ambulance.”

The following year her godfather died, leaving her feeling lost, and she returned to Fairbanks at the end of 2020, taking a part-time job at the North Pole Fire Department.

When she learned that the city was only hiring paramedics she returned to school in the fall of 2021, after which she was hired by University Fire Department.

Silva said her vision of raising and training tomorrow’s generation of firefighters and emergency medical services providers is the same as the department’s mission.

She said the choice to come to Clark County to finish her training was easy. That allowed her to live with her “second mother,” Donna Saunders, of Boulder City, while wrapping up the requirements for her new job. Silva has known Saunders since she was 5.

Silva called Saunders one of two “warrior women” in her life. The other is her mother. She said they lead by example as well as with sound advice.

She was able to spend two weeks at the start of 2021 at Casa Hogar, the orphanage in Cabo San Lucas in Baja California where Donna Saunders serves on the board of directors and heads its nonprofit International Community Foundation to accept donations.

While there she was able to help put finishing touches on the orphanage’s transitional housing program, which transformed shipping containers into apartments providing a place for the young men and women to live once they turn 18 and are aged out of the system. There they learn to become self-sufficient, functional members of society.

The haven the orphanage provides for the children also served as a safe place for Silva to heal emotionally as she moved into the next stage of her life, she said.

“I take pride in all aspects of my life,” and that she can now pass on what she has learned to the next generation.

But she’s not done. In addition to advocating for the patients she treats in the field, Silva said she plans to take classes at the university to get a degree in psychology so she can help provide mental health support to her peers.

She said they see people at the worst times in their lives and those experiences can be difficult to process and talk about to others.

She said she wants to take that darkness and help inspire others to find their own light, just as she has done.

“I am now the happiest I’ve ever been,” she said. “I am no longer afraid of tomorrow. I just navigate myself back to a place of passion.”