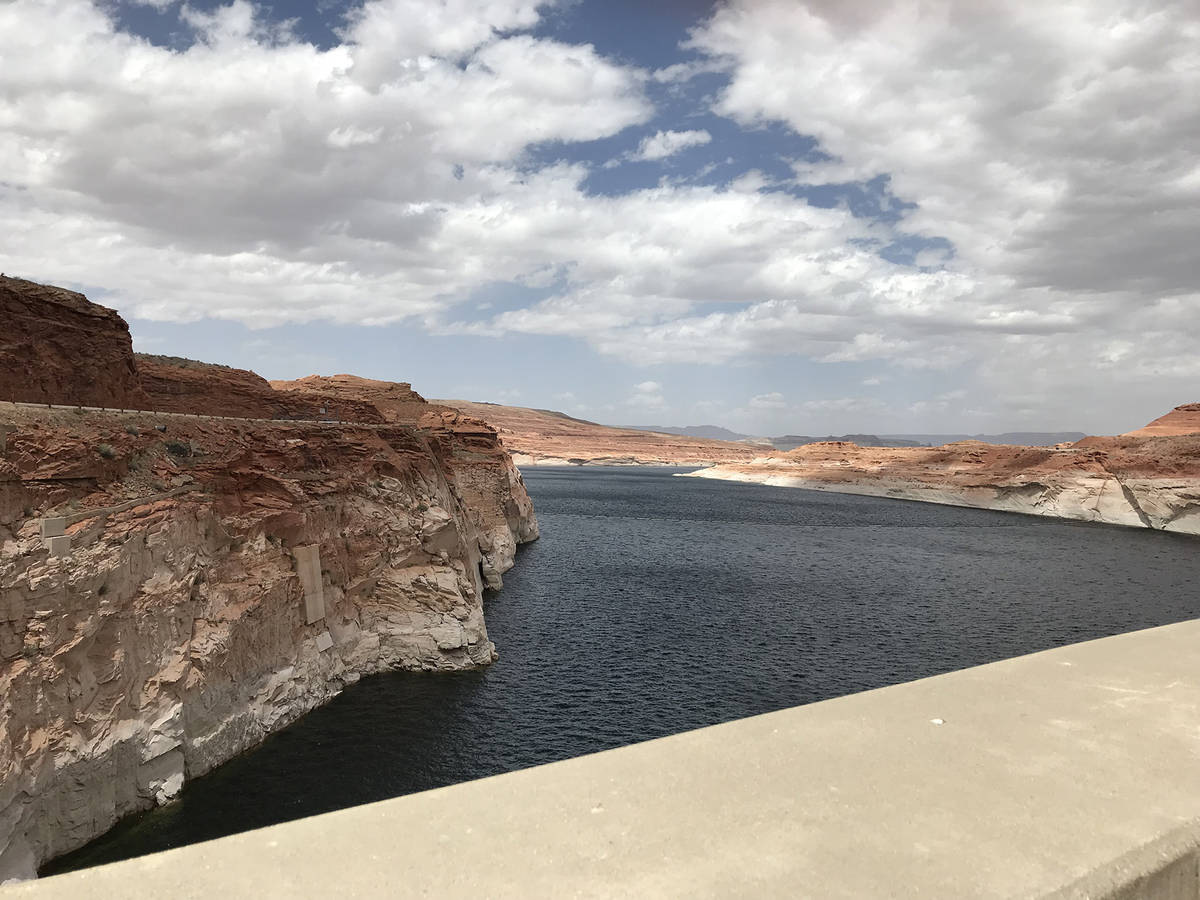 (Hali Bernstein Saylor/Boulder City Review) Water from Lake Powell, as seen from the Glen Canyon Dam in Page, Arizona, would be transported to Washington County in Utah if a proposed pipeline is built. It would divert water from Lake Mead; however, the proposal would replace that water from rights to the Upper Green River.

The Lake Powell Pipeline is a proposed project that would transport water from Lake Powell to Washington County in Utah. The water would be moved through a 140-mile buried pipeline by five pump stations. Six hydroelectric facilities would supply some of the energy for the stations.

“In the most likely scenarios, the project would have no effect on the water flowing into Lake Mead,” said Marlon B. Duke, public affairs officer for the Bureau of Reclamation’s Upper Colorado Region. “Except in rare circumstances, it won’t change the release volumes from Glen Canyon Dam. That’s because the water Utah plans to pull from Lake Powell would be exchanged with its existing water rights on the Upper Green River. That means, for whatever water the state might plan to deplete through the pipeline in a given year, it would not deplete a commensurate amount from its Upper Green River rights and instead allow that water to flow down to Lake Powell to cover its withdrawal there.”

The Green River is the primary tributary of the Colorado River.

Duke said the only time when Lake Powell’s water releases into Lake Mead could possibly decrease would be during an “exceptionally wet year.” At that time the river flows could be near flooding levels and more water would be held in the Upper Basin reservoirs, of which Lake Powell is one, to moderate flows.

“That scenario is rare and would have very little effect on elevations at Lake Mead,” he added.

The Utah Rivers Council is a nonprofit organization that protects the state’s water resources in order to sustain aquatic ecosystems. According to its executive director, the Lake Powell Pipeline will hurt Utah’s water resources and lead to less water in Lake Mead.

According to the council, Washington County residents have some of the highest per capita water usage in the country, more than 300 gallons per person per day. The reason for the high use is that county water suppliers are behind on implementing water conservation prices and curtailing waste.

Frankel said after 10 years the annual 86,000 acre feet of water per year that will be gone from Lake Mead will be enough to supply a city of 5 million to 8 million people.

According to the Washington County Water Conservancy District, the pipeline is needed to help with the expected population growth.

If approved, the pipeline will be paid for by the state of Utah. The Washington County Water Conservancy District is estimating it to cost as much as $1.7 billion.

Frankel said the project will wrap up public comments Sept. 8, and they are hoping for a decision by the end of the year. To comment, visit https://www.washco.utah.gov/forms/signup/lpp/.