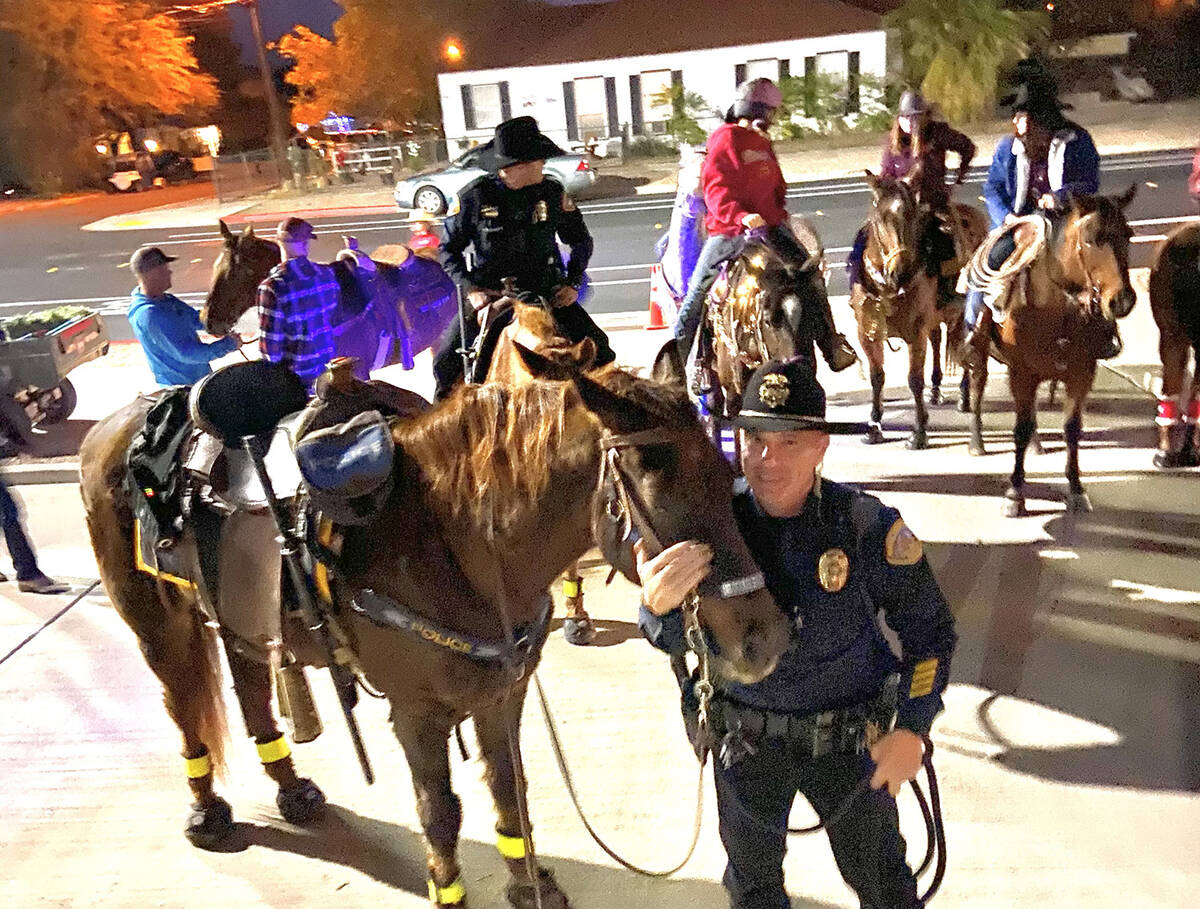 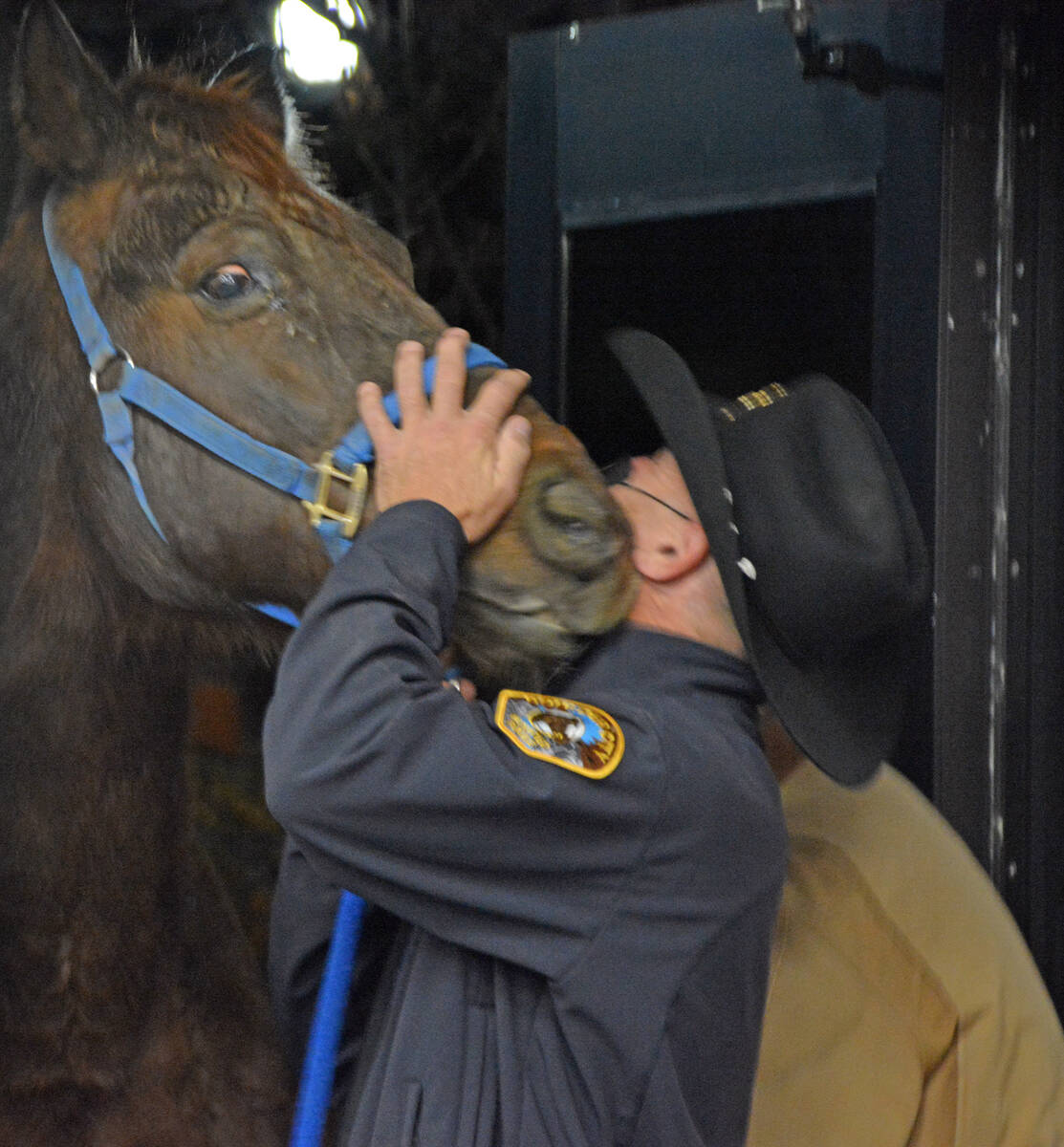 Odie, 22, was retired from active duty after this year’s Christmas parade due to complications from Cushing’s disease.

“To be fair to him, it’s only right to retire him,” said Scott Pastore, Odie’s partner for the past five years. “He will be replaced, but those are pretty big hoof boots to fill. I don’t think there will be another one like him.”

According to Pastore, one of the disease’s effects is that it doesn’t allow Odie to regulate his body temperature. Working in the summer heat is just too much for him.

For now, he can remain in Boulder City, but there may come a time when Pastore will need to send him to a friend’s ranch in the northern part of the state or find him a new home in a cooler climate.

“There are a lot of people who want him,” Pastore said, noting Odie has a big fan base on Instagram and Facebook.

“There were more than 200 messages congratulating him on his retirement from across the world.”

Another effect of the disease is sore feet and legs. Fortunately, they have been able to manage that with medications and supplements, including Mushponies, a herbal supplement made from mushrooms that has been donated by Dyanah Musgrave, Dale Ryan and the Boulder Business Development group for the past few years.

Musgrave said seeing Odie and other members of the mounted unit was a high point during her recent bout with cancer.

“Odie and the mounted unit visited me every two or three weeks to cheer me up. It was the best medicine ever,” she said.

As a way to return the favor, she helped set up an online store for animal health products, bcmpu.petclub247.com, with all the profits going to support the mounted unit.

When the mounted unit debuted in July 2016, it was just Pastore and Odie.

Since then, it has grown to include four officers — Pastore, Mike Petty, Anil Sharma and Shon Johanson — and three volunteer riders — Guistina Voyson, Justin Seidman and Rafael Sarabia. The unit has four horses — Apollo, a half Percheron draft horse; Lobo, a former race horse; Buck; and Pegasus or “Peg,” a wild mustang — and a temporary honorary member until Pastore finds a permanent replacement for Odie, the unit’s flagship member who will continue on in a training capacity, but only in the cooler months of the year.

The volunteers have their own mounts.

The honorary member, Maverick, belongs to Cindy Ford and her daughter Emma Ford, a member of the rodeo team at Boulder City High School. He has already participated in the Damboree and Christmas parades as “trial runs.”

In addition to his work with the mounted unit, for the past six years Pastore has served as the rodeo team’s advisor.

Even though his partner is retiring, Pastore said he’s not ready to be put out to pasture — so to speak.

He said Chief Tim Shea has mentioned the possibility of him continuing with the unit as a reserve officer when he finally decides to retire from full-time police work.

Pastore has been a police officer for 24 years and creating the mounted unit was a dream of his, allowing him to combine his work and love of horses.

He grew up in Connecticut and has always been around horses.

“I’ll stop riding a horse the day I can’t step in a stirrup,” he said.

Additionally, he likes that he has been able to rehabilitate and find new purpose for the horses, all of which have been donated, as part of the mounted unit.

New homes were found for horses that were donated to the unit but were not suitable for police duty.

As it has been since the beginning, the mounted unit is entirely self-sustaining. The officers are not paid extra and all of the expenses for the horses comes from donations and fundraisers through the nonprofit Friends of the Boulder City Police Department Mounted Unit.

But he has no complaints.

“Not everyone can be a police officer on a horse. … We do it for the passion of working with a mounted horse.”