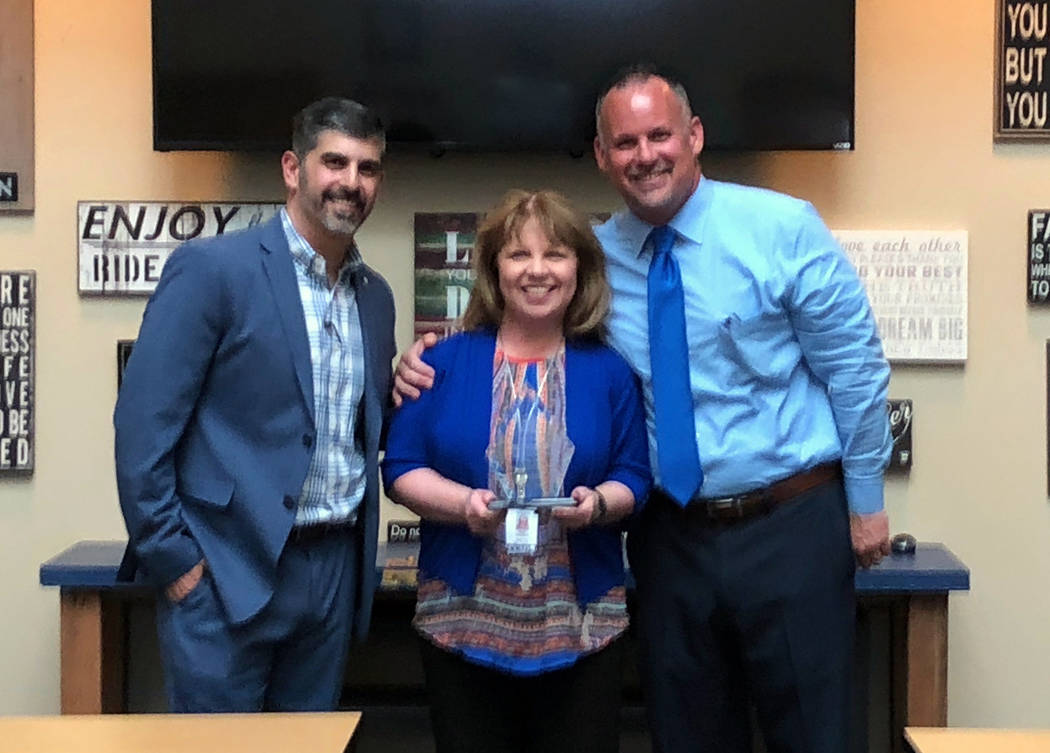 “It’s not just my award,” Principal Amy Wagner said. “I feel it’s the whole school’s award. It’s a testament to what we do every day and our passion for it.”

NASSP is an organization of principals and other school leaders across the United States. Its mission is to transform education through school leadership, recognizing that the fulfillment of each student’s potential relies on great leaders committed to the success of the student.

Wagner started at Boulder City High School in 2011 as assistant principal and become principal in 2014, always striving to create a familylike atmosphere among the students and staff.

She said she thinks of herself as a mom with more than 600 children, and when she was first given the keys to the school after becoming principal, it was a similar feeling to when she held her son for the first time.

“I love and care about them,” she said about the students. “I want them to know that someone is pulling for them. They matter to me and I worry about them every day. … I will stand with every single one of them.”

Wagner’s love for her students has been noticed by parents and teachers.

“My daughter was telling me how one day she was walking in the halls and looking a little down,” Kim Cox said. “Mrs. Wagner actually pulled her aside, called her by name and talked to her about what was going on. Another time Mrs. Wagner was dancing with my son and his friends at a volleyball game. She makes school personal. … Mrs. Wagner has fostered a culture of caring, and Boulder City High School is truly student-centered.”

Cox is one of the people who provided a recommendation about Wagner to the association.

Mathematics teacher Cheryl Herr also recommended Wagner because she said she “truly loves” everyone at the high school, students, staff and community.

“She cares about improving and promoting our school and making the environment inclusive for all,” Herr said. “The best part about working with Mrs. Wagner is that she is more than the principal, she’s a friend. Her door is always open — whether to listen to ideas, help with a problem or just to visit because she cares about each of us, both professionally and personally. She tries to create an environment where our staff is more than colleagues, we’re a family.”

Kurt Bailey, a new teacher and coach for volleyball and basketball, said having Wagner as principal is “like having a positive motivational speaker on your shoulder that is constantly telling you that you can succeed.”

“Being a new teacher at BCHS, you can really feel the enthusiasm and school spirit that is somewhat lacking at other schools in the district,” he added. “It feels like a high school should feel. Most of that feeling is generated from the top because Amy inspires others to be better. … She is the most visible and supportive administrator I’ve ever been around in my 22 years of teaching in the district.”

Another element to Wagner’s time in Boulder City was overseeing a multiyear renovation of the high school campus that started shortly after she became principal. She credits the successful renovation to everyone at the school.

“We had to lean on each other because we were in it together,” she said.

Wagner will be honored at NASSP’s Principal Institute in Washington, D.C., from Sept. 30 to Oct. 3 and could also be in the running for the National Principal of the Year award, as three state honorees will be named finalists.