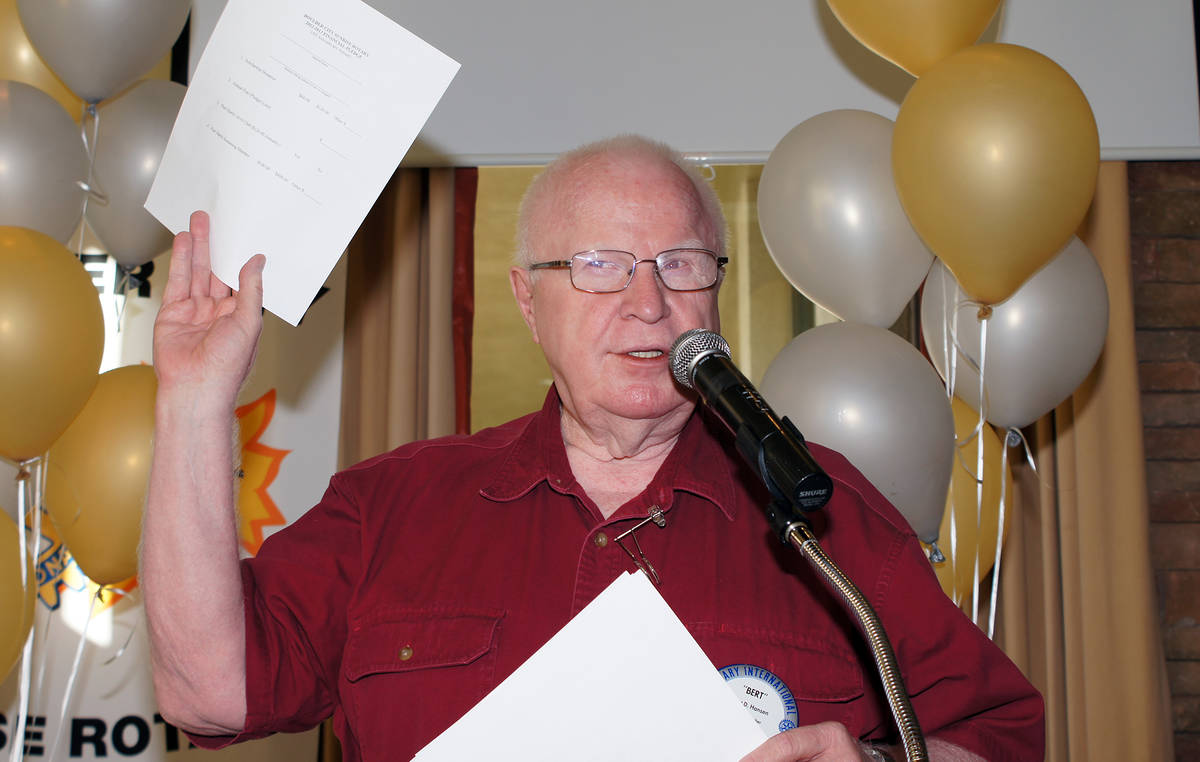 (Roger Hall) Boulder City resident and community supporter Bert Hansen is in the hospital with COVID-19, according to a family friend.

Boulder City’s longtime resident and community supporter, Bert Hansen, is in the hospital and still fighting COVID-19, according to a family friend.

Hansen is one of the founding members of the Boulder City Sunrise Rotary Club and operator of the gift shop at Hoover Dam.

His family friend and longtime employee, Mike Penuelas, said Hansen has been at Henderson Hospital since March 26. He said Hansen is stable and had been on a ventilator until March 31 when doctors put him on a respirator.

“They’re still working on him, and he’s been stable for awhile. … So that’s hopeful that the doctors haven’t given up,” Penuelas said.

A ventilator is a machine that helps a person breathe and respirator is a mask-like device that prevents inhaling noxious substances.

Penuelas said he is encouraged that Hansen’s condition hasn’t deteriorated since he was admitted to the hospital.

“We have our fingers crossed and we’re saying prayers. … They haven’t thrown in the towel yet, which is good,” he added.

He said Hansen, who is 80 years old and has diabetes, started feeling ill and having some health issues and went to Boulder City Hospital on March 26. He said he was diagnosed with double pneumonia, tested for COVID-19 and transferred to Henderson Hospital.

“He was heavily sedated and put on a ventilator,” Penuelas said.

Visitors are not allowed at the hospital, so Penuelas said people can pray for Hansen and keep the positive energy headed his way.

“He’s a good guy and has a lot of positive energy going for him,” he said.

As a member of Rotary Club, Hansen was heavily involved with the Breaking the Cycle Rehabilitation Court.

Judge Victor Miller, who oversees drug court, said Hansen hired a number of the people going through the program. He said at the beginning of the program Hansen “went out on a limb” and hired a woman who was unemployed and essentially homeless.

“He helped her arrange transportation to work at the dam until she was able to get a driver’s license and … a car to get there on her own,” Miller said.

At the woman’s graduation, Miller said her suspended jail sentence had been recalled but she still had to make payments to pay off her fines.

“During the ceremony … he stood up, pulled out his checkbook and paid them for her while explaining how proud he was of her and what a good, loyal employee she had become as she worked through her issues in the Breaking the Cycle Rehabilitation Program with us,” Miller said. “This was not the last of our participants he hired.”

Hansen was also involved with the Boulder City Chamber of Commerce.

Chamber CEO Jill Rowland-Lagan said he is a past president of the organization and an annual award is given in his honor to someone who has gone over and above to create a world-class business as well as respecting their employees and excelling at customer service.

Rowland-Lagan said Hansen was president before she started working at the chamber, but he is still at the top of her list of mentors because of his compassion, desire to see people be more successful than himself and his “very special way of teaching a lesson that has you do a double-take when you realize you just learned from the master.”