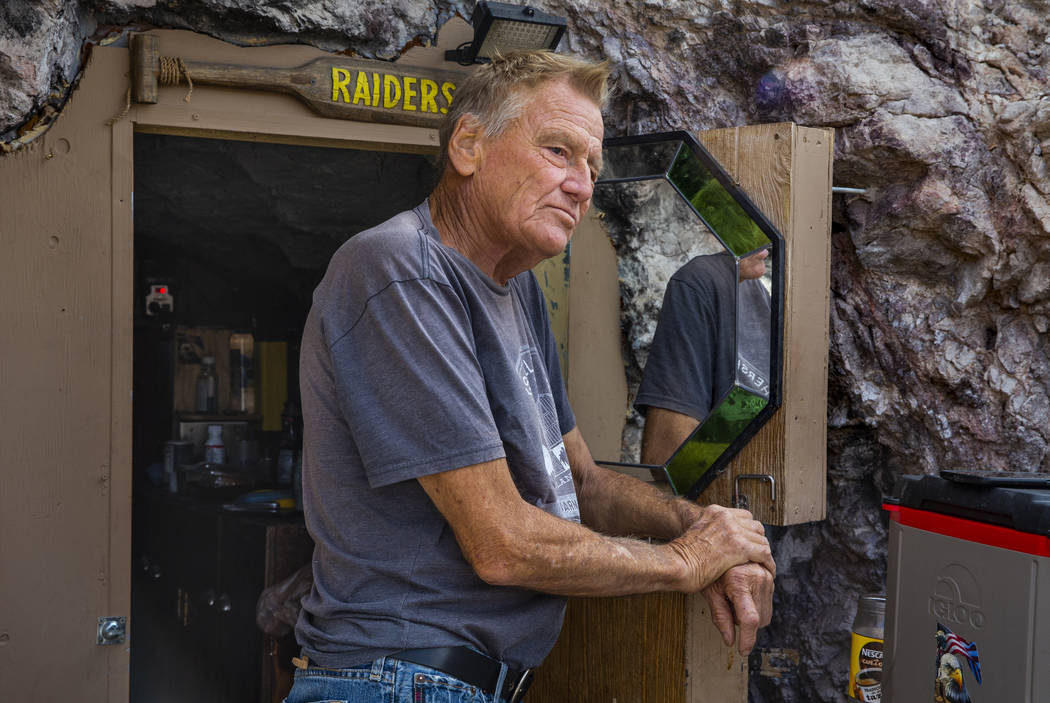 (L.E. Baskow/Las Vegas Review-Journal) Richard Roman has lived in a former mine in the hillside above the River Mountains Loop Trail east of the Railroad Pass Casino for the past seven years. On Dec. 19 he was a served a 30-day notice to vacate the location. 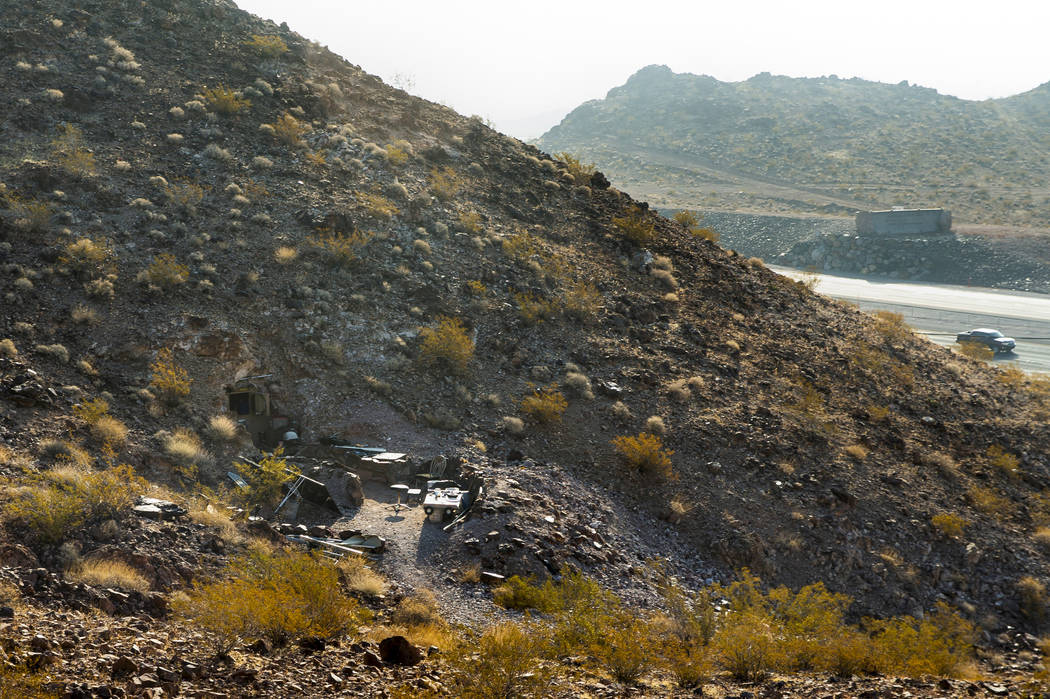 (L.E. Baskow/Las Vegas Review-Journal) The entrance to Richard Roman's home in a former mine blends into the hillside above the River Mountains Loop Trail east of the Railroad Pass Casino in Boulder City. Roman was recently given a 30 day notice to vacate and must be out by Jan. 18. 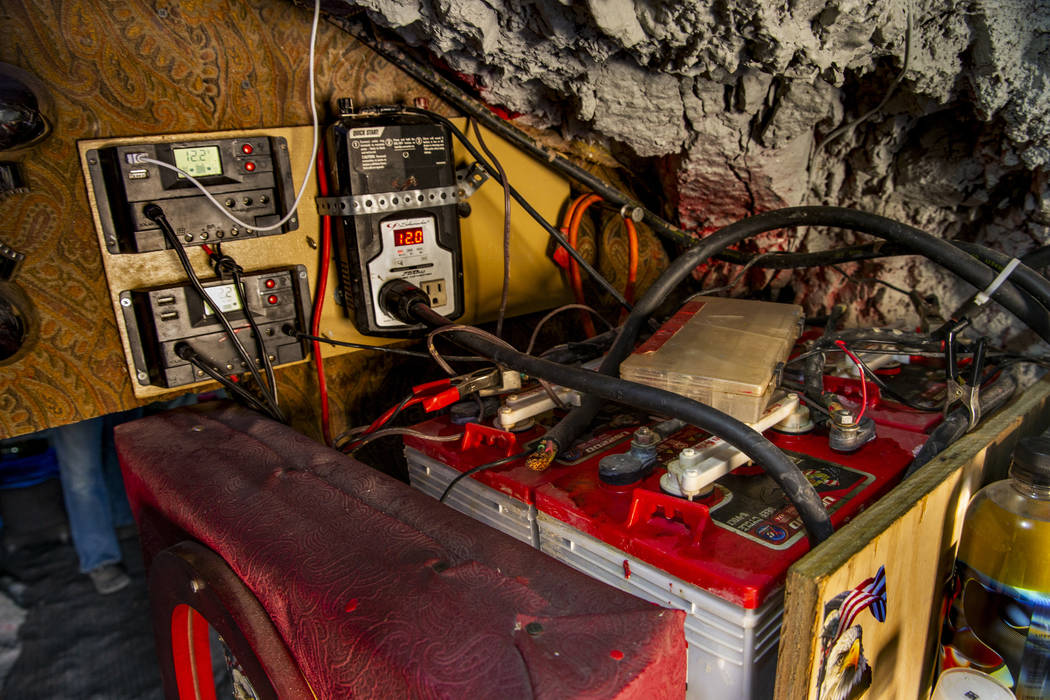 (L.E. Baskow/Las Vegas Review-Journal) Batteries charged by solar panels outside are then inverted to AC electricity powering Richard Roman's home in a former mine in the hillside above the River Mountains Loop Trail east of the Railroad Pass Casino. Roman was recently served a 30-day notice to vacate and must be out by Jan. 18.

A man who has been living in an abandoned mine shaft for seven years in an undeveloped area of Boulder City was recently given a 30-day notice to leave.

Late last year, the city learned that Richard Roman was living at the site near U.S. Highway 93 and Railroad Pass Casino Road. He recently shared his story with the media.

On Thursday, Dec. 19, Boulder City Police Sgt. Craig Tomao and officer Guy Leidkie went to the mine shaft and gave official notice to Roman that he needed to leave the area within 30 days, according to an email sent to the mayor and City Council members by City Manager Al Noyola.

Members of Help for Southern Nevada were also part of that visit and spent 90 minutes with Roman.

“HELP conferred with Mr. Roman and took him to several apartments where he qualifies for housing assistance,” Noyola wrote in the email. “Mr. Roman understood the health and safety concerns, and confirmed that he will be leaving the site within 30 days. I appreciate the expediency and empathy shown by the officers and HELP of Southern Nevada to help address this issue.”

Once Roman vacates the site, which he is supposed to do by Jan. 18, the city will work with a state contractor to permanently close the mine shaft.

When last interviewed, Roman said he was making preparations in case he would need to leave. He said his plan was an 8-foot-wide tepee he created out of plywood that is at an undisclosed location.

According to the Boulder City Communications Manager Lisa LaPlante, when officials found out about Roman’s presence, a local police officer and a Nevada Department of Minerals official investigated the living situation. Roman refused any help from them.

He is violating four city codes and two state laws as well as causing numerous health and safety concerns by living there.

LaPlante said that despite the need to enforce the law and keep the mine shaft from being used again, the city’s goal is “to be as understanding, supportive and caring as possible” in helping him safely relocate.

The mine shaft extends horizontally about 20 feet into a rocky ridge, where it reaches an approximately 160-square-foot cavern living area. Roman installed two swinging doors at the entrance, and has a customized mattress that fits into an elevated corner and an old fan salvaged from a scrapped vehicle that maintains the temperature at 85 degrees.

Additionally, he has a $2,000 solar panel that powers several LED lights and batteries. The floor of the cavern is covered with a carpet that had been thrown out by a casino.

The other two city codes are 7-5-9, which puts those restrictions on undeveloped land as well as public parks, and 7-5-10, which states that anyone who violates those codes is guilty of a misdemeanor.

The health and safety concerns are no safe or immediate ingress/egress for emergency vehicles, no running water and no safe disposal of human waste, potential flooding and dangerous wildlife encounters, and the long-term and unpermitted use of city property.

The two state laws Roman is violating are NRS 207.030(g)(3), which prohibits anyone from lodging anywhere without the permission of the owner, and NRS 207.200 that forbids trespassing on land.

In late 2019, Noyola put together a task force to help those experiencing homelessness, led by Parks and Recreation manager Julie Calloway.

According to a task force update, 10 homeless camps at three locations were cleaned up between Nov. 25 and Dec. 18.