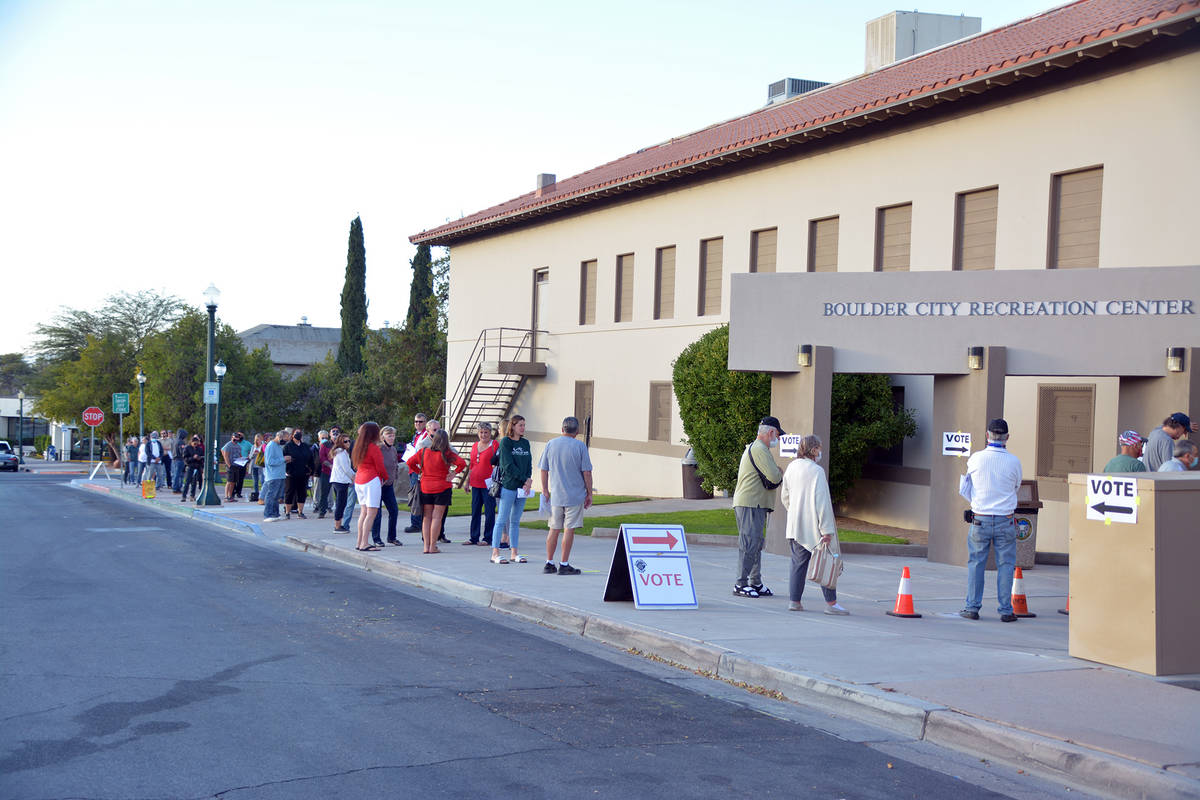 Celia Shortt Goodyear/Boulder City Review Registered voters were lined up and ready to cast their ballots when the polls opened Tuesday, Nov. 3, at the Boulder City Parks and Recreation Center, one of two voting centers in town.

Election Day has come and gone, with local incumbents appearing to reclaim their seats, but the final results for 2020 have yet to be announced.

Nevada’s updated election results for local and national races are expected to be released today at 9 a.m. with the final election results expected Tuesday, Nov. 10, after all the mailed in ballots have been counted.

As of Wednesday afternoon, Democrat Susie Lee had a slight lead over Republican Dan Rodimer in their race to represent Congressional District 3. Lee had 48.23 percent of the votes cast, and Rodimer had 46.73 percent. Independent American Ed S. Bridges II had 2.39 percent and Libertarian Steve Brown 2.64 percent.

“A record number of Nevadans have voted this year, by mail, early in-person, and in-person on Election Day. While we know everyone is anxious to get results, we will patiently wait for every vote to be counted. With the majority of votes in, we feel confident that Susie Lee will maintain her current lead, and is in a strong position to win re-election to Congress,” said her campaign in a statement.

Republican Glen Leavitt, who just completed his first term as the District 23 representative in the state Assembly, was leading with 63.54 percent of the vote and 26,573 votes. Democrat Brent Foutz had 33.76 percent, with 14,118 votes cast for him and Independent American Bill Hoge had 1,133 votes, 2.71 percent.

Lisa Guzman was leading in the race for Clark County School District board, District A, with 52.80 percent of the votes cast, and Liberty Leavitt had 47.20 percent.

The delay in reporting the results is because election officials needed to count the mail-in ballots “undisrupted” on Wednesday, according to Wayne Thorley, deputy secretary of state for elections.

“The difference between (former Vice President Joe) Biden and (President Donald) Trump is close to 9,000 votes,” he said. “I don’t know the number of outstanding mail-in ballots but we are in the tens of thousands range. It absolutely could change (results.)”

Question 1 is about the governance of the state university system. If passed, it would remove the Nevada System of Higher Education Board of Regents from the state’s Constitution, giving the Legislature more oversight of the board. Currently, a yes response is leading with with 396,355 votes, 55.37 percent.

Question 2 seeks to provide marriage equality for all. If passed all marriages will be recognized by the state Constitution regardless of gender. The yes votes were leading with with 63.87 percent of the vote.

Question 3 is about the state’s pardon commission, how often it meets, who can submit issues to be considered and if the governor’s vote has to be part of the majority to grant pardons and clemency. If passed, the board, composed of the governor, the attorney general and state Supreme Court justices, would be required to meet quarterly to deliberate possible pardons. As it stands, there is no mandate on how often the board has to meet. Currently, the yes votes are leading with 63.5 percent of the vote.

If approved, Question 4 would add a new section guaranteeing specific voting rights to all qualified and registered voters in the state. Currently, the yes votes are leading with 66.92 percent.

Question 6 is about the amount of renewable energy that must be generated or acquired by providers of electrical utilities. If passed, it would mandate that the state generate 50 percent of its energy from renewable resources by 2030. Currently, the yes votes are leading with 61.22 percent.

According to the Clark County Elections Department, 1,254,942 registered voters participated in the 2020 election. In Clark County, absentee ballots accounted for almost 27 percent, or 337,060 of the votes cast. A total of 84,454 voters cast their ballots on Election Day and 378,612 participated in early voting.

Additional information about the election is available at the Clark County Department of Election’s website at https://www.clarkcountynv.gov/government/departments/elections/index.php.