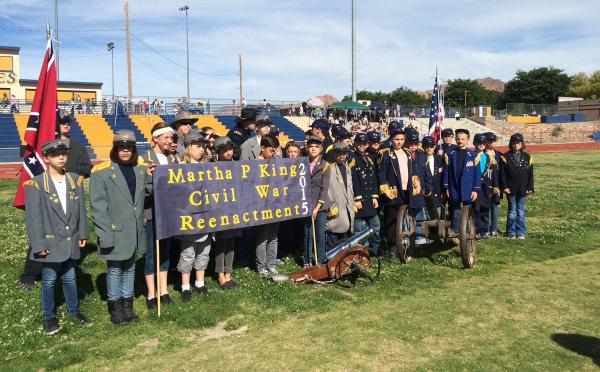 One hundred and fifty years after Gen. Robert E. Lee surrendered at Appomattox, it appears that the Civil War has finally ended in Boulder City.

The annual re-enactment by fifth-graders at Martha P. King Elementary School will likely be canceled, according to teachers at the school.

However, the official word from the school district is that “nothing is definitive at this point,” said Michelle Booth, director of communications.

A letter about the possible cancellation from Principal Anthony Gelsone, who referred all questions to the district’s communications offices, was sent home with students on Friday.

“Due to many factors, including changes in the CCSD (Clark County School District) curriculum to reflect the Nevada Academic Content Standards, it has prompted the discussion to possibly forgo the re-enactment,” the letter read.

A meeting has been scheduled for 3:30 p.m. Tuesday in the school’s multipurpose room to discuss the matter and see if they can move forward with the war re-enactment and what would need to be done if the key supporters — notably the fifth-grade teachers — were unable to participate, Booth said.

The letter invited parents and members of the community to attend.

“Decisions that impact our community are taken very seriously. Our primary goal is to increase student achievement by implementing curricular standards and maximizing instructional time. We look forward to your input,” Gelsone wrote in the letter.

Clare Tobler, who founded the war re-enactment 30 years ago when he was a fifth-grade teacher at the school, said Gelsone called him because he “didn’t want me to be the last one to know.”

Tobler, who continued to appear in the annual re-enactment for years after his retirement as Confederate Gen. Robert E. Lee, said he will support whatever decision is made but is disappointed for his granddaughter, a fifth-grader this year. He understands the time and commitment working on the re-enactment is for the five fifth-grade teachers at the school.

Parents, clearly upset over the possible cancellation, took to Facebook to express their sadness, disappointment and willingness to volunteer so the event could be held. Students even circulated a petition to keep the event.

A teacher at the school, who asked not to be identified, wrote in the lengthy conversation that the cancellation was because, in part, that the Civil War is no longer part of the fifth-grade curriculum. It is now taught to seventh-graders. It also took a great deal of time away from classroom instruction.

“When I started it, it was a lot simpler,” Tobler said. “They have added to it and made it a magnificent pageant.”

He said he honestly thought it would be discontinued years ago, when his fellow teacher and Union Gen. Ulysses S. Grant portrayer Harold Coe retired.

The re-enactment takes several hours and includes a parade of troops, flag ceremony with live horses, cannon firings and battles with the North and South firing at each other with water balloons. In between the battles, students offer history lessons about each fight and significant events during the war.

Tobler said he would like to see some type of alternative offered this year, especially because the students were looking forward to it.