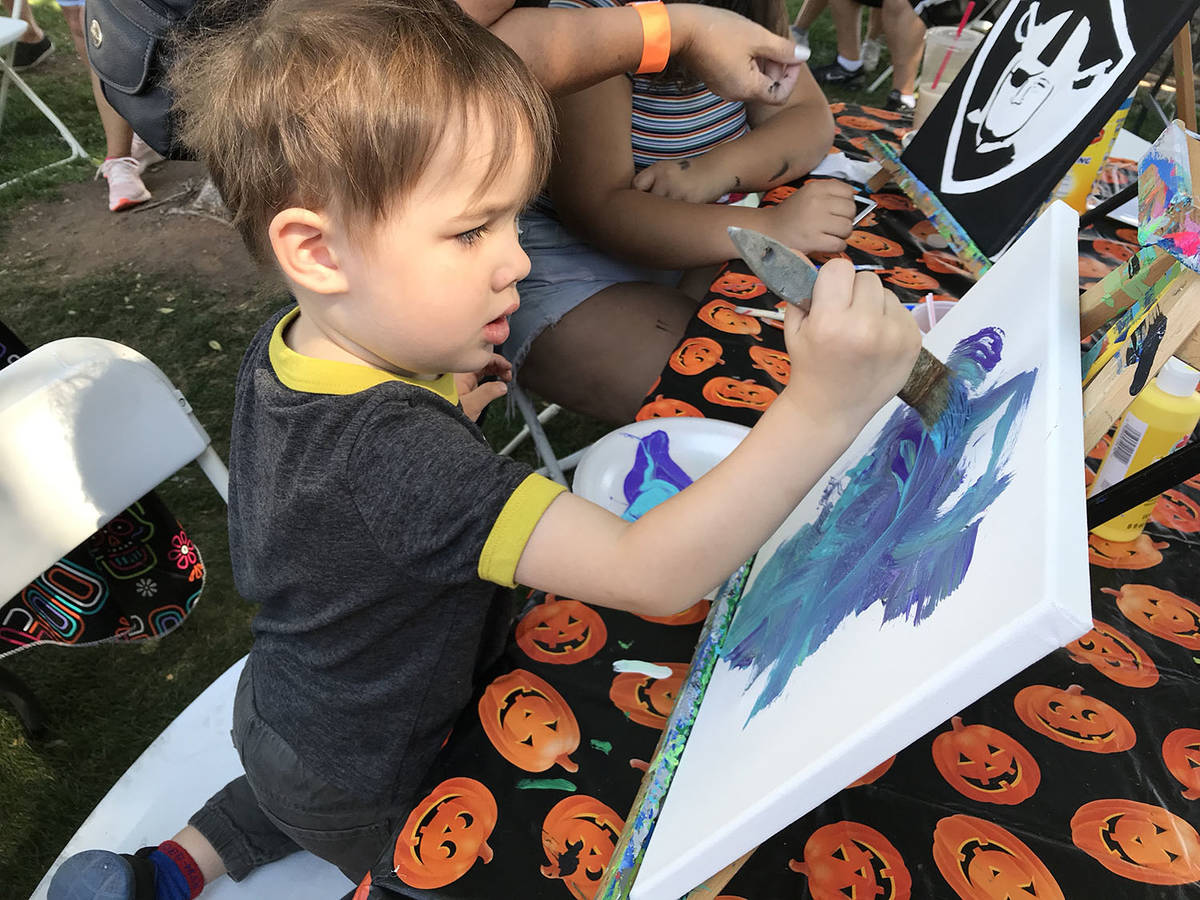 Fall and winter events such as Art in the Park, where Kailo Adduci of North Las Vegas created his own painting in 2019, are being canceled, postponed or altered as a result of COVID-19.

Fall and winter in Boulder City are shaping up to be quiet as local organizations are canceling, altering or postponing community events.

Tuesday, Boulder City Hospital Foundation announced it had canceled Art in the Park for this year.

“As stewards of the health and well-being of the community, together, the (Boulder City Hospital) Foundation and the hospital decided postponing this year’s event would be in the best interests of the artists, vendors and volunteers, and the community as a whole, to forgo this year’s event due to social distancing, safety concerns and the ongoing impact of COVID-19,” said Victoria George, director of marketing and community engagement for the medical facility.

She added that events are being planned for later this year and 2021 with a keen eye on COVID-19 developments and “we look forward to once again enjoying Art in the Park next year as well as future outdoor entertainment and sporting events.”

George also said the foundation will make an appeal on behalf of the nonprofit hospital soon with the hope that “the community will once again rally their giving support.”

“Annually, the foundation provides approximately $500,000 to Boulder City Hospital, which is used for medical equipment and supplies and we appreciate the foundation’s efforts and the impact of their commitment for our community hospital, ER and primary clinic,” she said.

Also canceled for this year is Boulder City Community Club’s Doodlebug Craft Bazaar, which is held the first Saturday in December.

“This reluctant decision was made out of an abundance of caution for fellow members, volunteers, vendors and attendees,” said President Cokie Booth.

She said the uncertainty of what size gatherings will be allowed to take place impacted the board’s decision.

“… the city is not even able to commit to allowing the event to take place because of certain guidelines that may or may not be in place in December. Therefore, the board decided it would be in everyone’s best interests to make the decision now rather than try to pursue the event and risk cancellation.”

Those uncertainties about the size of gatherings that will be allowed also have cast a shadow on the annual Pooch Parade, presented by the Boulder City Chamber of Commerce in November.

Jill Rowland-Lagan, executive director of the chamber, said she is fairly certain it will be canceled, as no one has begun making any plans for the event.

Also uncertain are plans for December activities. With the Doodlebug canceled, they are trying to find an outdoor alternative for the Picture Party with Santa that allows for proper social distancing, as well as if there is a way to televise the annual tree lighting. Santa’s Electric Night Parade remains in limbo, Rowland-Lagan said.

She said Dale Ryan and Dyanah Musgrave are planning some type of “flip the switch” event to turn on the Christmas lights on their Fifth Street home, but details are unknown at this time.

She did, however, offer a glimmer of hope for other holiday events presented by the chamber.

“We are working on an alternative to Trunk or Treat,” she said adding they are considering something like a drive-in movie night or drive-by trick or treating.

Additionally, she said plans are for the monthly Best Dam Wine Walk to return in September.

“We were told by the (Southern Nevada) health district that we should be OK and to check back in with them as we get a little closer. But it is our intent to host those beginning with September because we are able to control the 50 people or less in crowds and in businesses.”