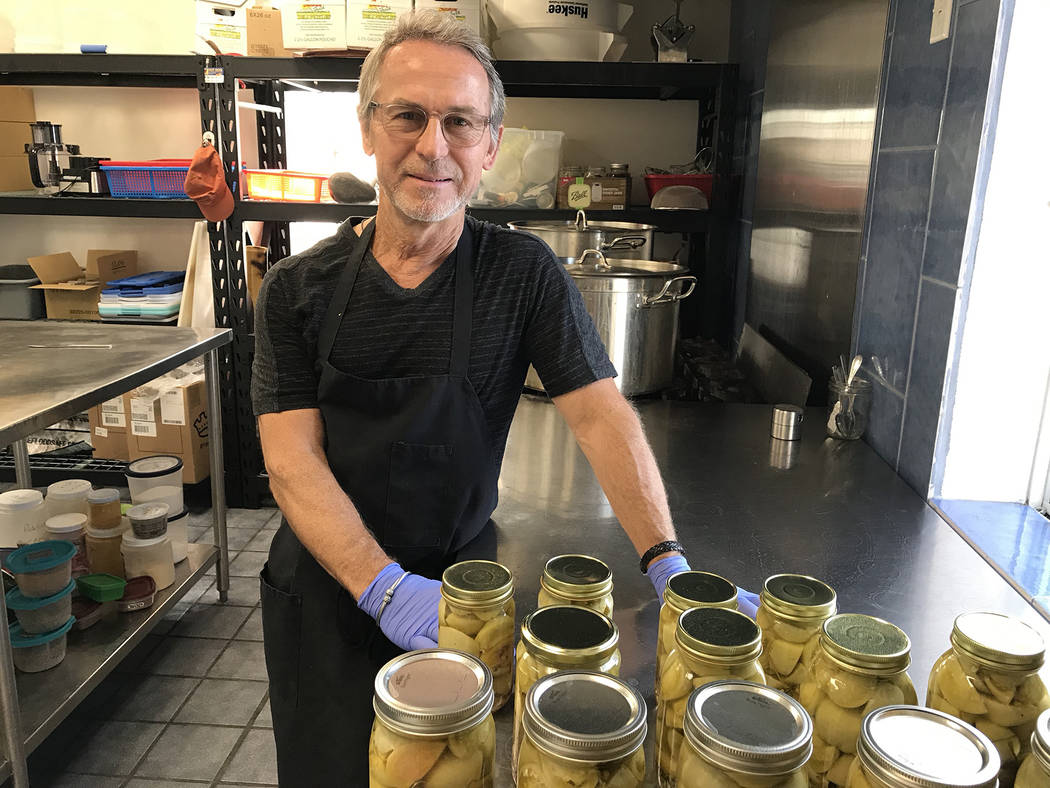 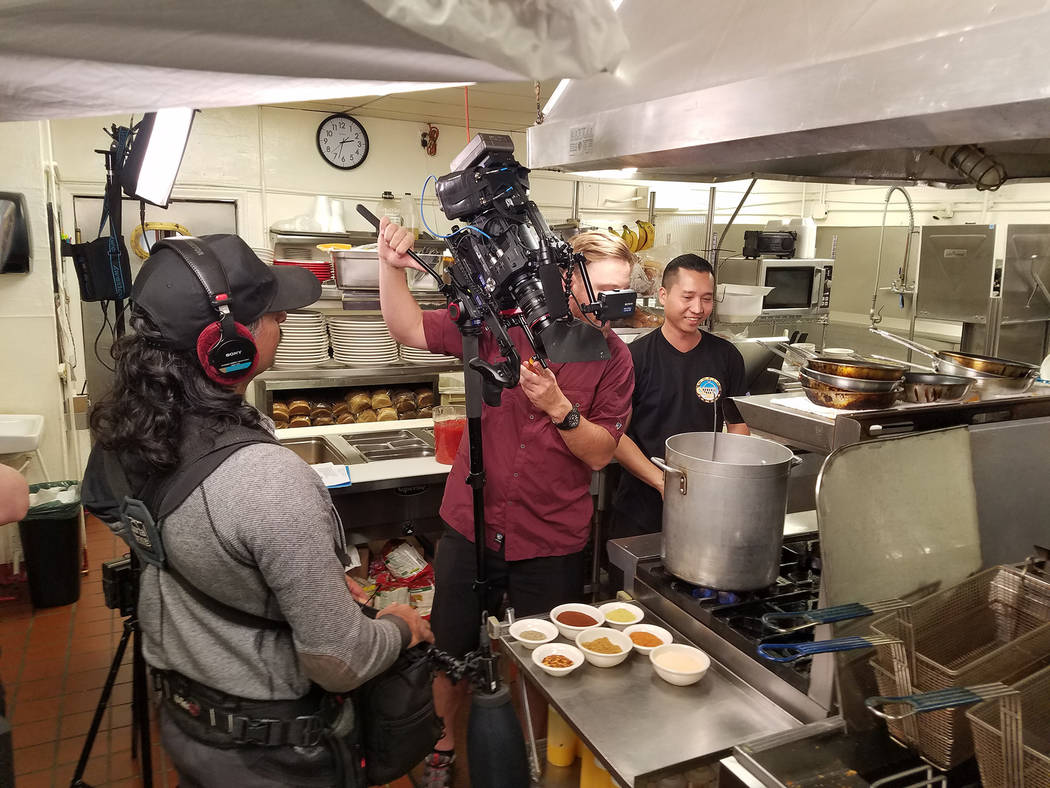 One taste of Nicholas Kreway’s pickled vegetables, and you are transported to grandma’s kitchen. It might not necessarily be your grandmother’s kitchen, but he uses family recipes and pickles items the way his Ukrainian grandmother did.

Kreway said he grew up eating pickles, a Ukrainian staple, and lived with his grandmother for two years when growing up in Canada.

“I watched how she made her products,” he said.

One day, after moving to the United States, he said he was craving his aunt’s pickled carrots and called to get her recipe.

That launched him into a hobby that turned into a business.

Today, he makes an assortment of pickled vegetables in a tiny kitchen behind a nondescript storefront in Red Mountain Plaza and sells them through his company, The Pickled Pantry, at farmers markets and special events such as Art in the Park.

“It’s all from original family recipes, but I tweaked them a bit,” he said. “They still have that old-fashioned grandma’s taste.”

Part of what makes his products unique is that he pickles them in various intensities: mild, hot and insane hot.

Being in the kitchen is second nature to Kreway, who started cooking for his family when he was 10. Later, he went to vocational school to be a chef. He ended up working as a stagehand for “EFX” at the MGM Grand and later “Ka” by Cirque de Soleil, where he shared his pickled products with co-workers.

After an injury, three operations and about a year off work, his bosses began to ask him if he was planning to return.

He had spent the past 16 years “test marketing” his products and decided it was time to start his own business.

That passion is returned by his customers, Kreway said, adding he “can’t make it fast enough.”

He often sells out at the farmers markets he frequents and spent two months preparing for Art in the Park last year.

Kreway said his pickled mushrooms are his biggest seller.

He keeps fans updated on what’s available and where he will be on his Facebook page. He hopes to offer his products on etsy in the near future.

When Izzy Collett looks at the Colorado River, she sees more than just a beautiful body of water.

Collett, owner and CEO of Desert Adventures, sees a resource for life-sustaining water, a place to earn a livelihood and her sanctuary where she can recharge her soul.

She strives to maintain balance between working on the river, sharing it with others and protecting it for future generations.

“One of the reasons I started the company was to help people experience the outdoors,” she said.

Through Desert Adventures, Collett offers an assortment of outdoor experiences, including paddle craft trips primarily in Lake Mead National Recreation Area. More than just a tour guide, she, with her staff, serves as a steward of the environment and rescue worker.

They teach and practice leave-no-trace principles, picking up trash left behind by others. And, as they travel along the river, Collett said it is very common for her and her staff members to rescue people in paddle crafts who “don’t know how to rescue themselves” and recreational hikers who don’t fully understand the elements and environment of the desert.

“People don’t realize how remote they get because they are so close to Las Vegas,” she said.

She said they offer some type of aid or rescue nearly every day.

“It’s not always life-threatening or with injuries, but they need assistance,” she said.

That can include providing drinking water or helping people right their watercrafts after capsizing.

After 25 years exploring Lake Mead and the Colorado River, Collett said there are unpredictable conditions including sudden winds and monsoons that pose many dangers to inexperienced recreationalists.

Collett said she doesn’t want to hinder anyone’s passion for exploring but wants to make sure they do so safely. It’s one of the reasons that she offers classes on kayak and canoe skills, CPR and first aid, including wilderness first aid.

Her love for the area extends to her participation on the Lower Colorado River Water Trail Alliance, which was responsible for getting the 26-mile stretch below Hoover Dam through Black Canyon designated at the West’s first national water trail.

The association is working to get the Mohave Water Trail, a 76-mile segment that passes through Eldorado Canyon and stretches below Davis Dam to Laughlin, its national designation.

With offering guided tours on the river, Desert Adventures offers hiking and biking tours and self-guided tours and rentals. Supplies to experience the outdoors also are available at the company’s headquarters and store at 1647 Boulder City Parkway, Suite A.

Terry Stevens, a co-owner of the eatery, said it had been about 11 years since the first visit, which focused on his parents, Al and Carrie Stevens, and their recipes.

The follow-up, which was filmed in October, highlighted Terry Stevens and his sister, Lindsey Stevens’ carrying on the family tradition along with new dishes such as the Kahuna Burger, which have been selling “out of control,” Terry Stevens said.

Al Stevens said when they were first on the show, he and Carrie were working seven days a week from 5:30 a.m. until 4 p.m.

Now, with the second generation of Stevens working in the restaurant, the schedule is a little less hectic.

The new episode also put the spotlight on Jay Lavetoria, the Coffee Cup’s cook, who has been working in the kitchen for nearly 15 years.

“It was like a time capsule,” Terry Stevens said of seeing the episode. “There were a lot of scenes not seen before.”

Terry Stevens said that since the show aired, a lot of people from Las Vegas and North Las Vegas who had never been to Boulder City before have been visiting the restaurant and community. They have been commenting on how beautiful the town is.

Herbs by Diane has extended its hours of operation to include Friday and Saturday mornings.

The farm, at 1506 San Felipe Drive, is open to visitors from 8-10 a.m. Fridays and Saturdays or by appointment. Also, orders can be picked up at various restaurants on Thursdays and Sundays.

Diane Greene, owner and operator of Herbs by Diane, has been providing organically grown herbs, vegetables and microgreens to restaurants in the Las Vegas Valley for 10 years. Much of that time her produce has been available to the public at farmers markets and from the farm. Greene also offers dried herbs, dried herbal blends, herb-infused vinegars and handmade soaps.

“Pesticides are not used on our herbs and vegetables, and we do not use chemical fertilizers. Instead, we make our own compost on site to feed the gardens,” she said.

Customers can place orders online at herbsbydiane.com, by email dianegreene2@cox.net or by telephone at 702-293-3451.