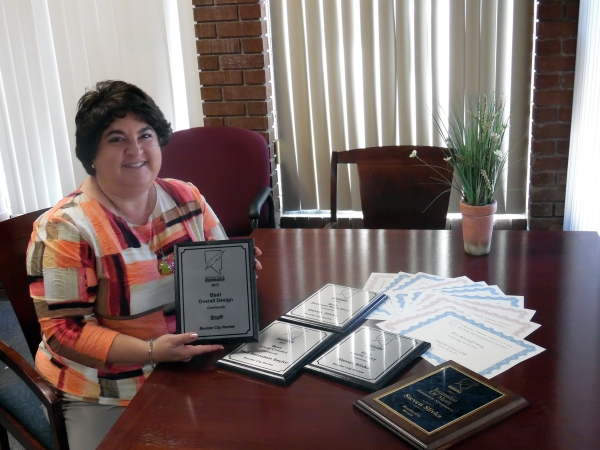 “I am so pleased and honored to be recognized and see our staff members recognized. We put our best efforts into each issue of the Boulder City Review,” she said.

In their comments about Bernstein Saylor’s award for her column, judges wrote “Great writing. Love the sense of community in your writing, too.”

Former staff writer Steven Slivka was named a Journalist of Merit, an award given to writers who have five or fewer years of professional experience.

“Being named Journalist of Merit is an absolute honor, especially since this state has so many reporters worthy of the award,” Slivka said. “Journalists don’t do their jobs for the recognition or the spotlight. We do it to ensure that the public knows what’s going on around them. Still, it feels great knowing that all of your hard work doesn’t go unnoticed.”

The judges called Slivka a “versatile reporter. Steven seems comfortable with all kinds of assignments and the stories show he’s more than capable at each.”

In all, he was presented with seven awards.

“It is great to see the hard work of our news team being recognized by the industry,” said Jason Taylor, publisher of the Boulder City Review and president of GateHouse Media’s Western U.S. Publishing Operations.

Winners were announced Friday during a banquet at the Nevada Press Convention at the Sparks Nugget.

Other awards earned by the staff were: