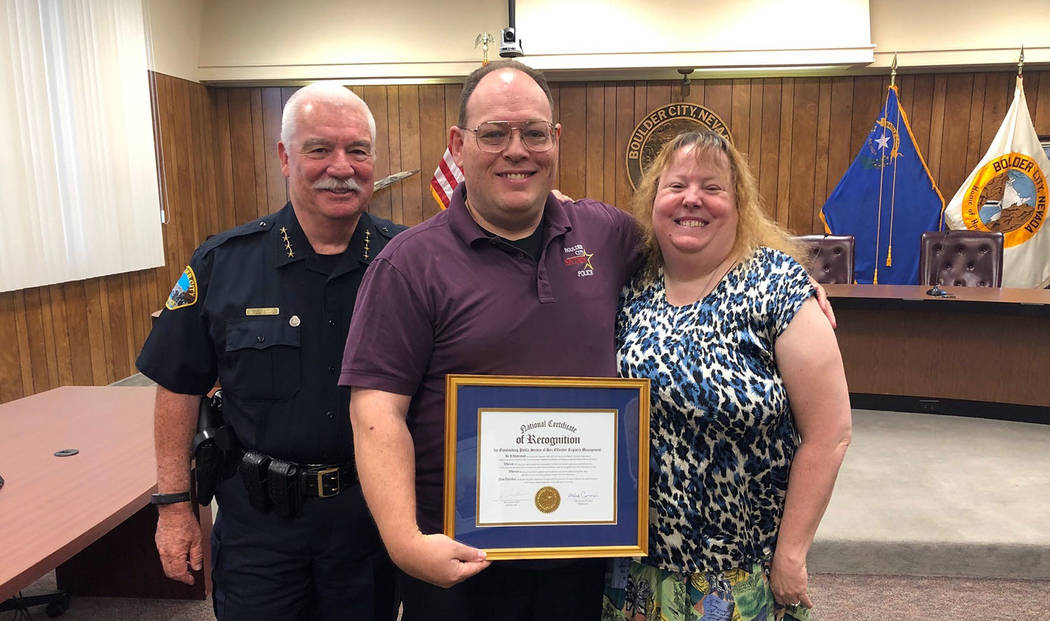 Bill Avery, a longtime employee of the Boulder City Police Department, was recognized nationally this week for his work on the local sex offender registry.

OffenderWatch, a national registry of offenders, recently chose 50 law enforcement members in the country to receive the National Award for Excellence in Sex Offender Registry Management. Avery was one of those chosen.

“I’m honored for the recognition because in that way the community can be more aware of what’s around to keep themselves and their families safer,” he said. “I’m happy to accept this recognition on behalf of the whole department, volunteers and staff.”

He was given the award Tuesday, Sept. 10, in recognition of his work reorganizing the city’s registry after Nevada changed its management process.

“The state records showed that we had nearly three times the number of registered sex offenders living in the city than were actually here,” he said. “I went through and researched those files and found that we currently have 36.”

He also added more information to the database so residents could have the most comprehensive information available.

“That also helped other jurisdictions because when a file is transferred to them they know there is someone else in their community that will have to become a part of the registry process,” Avery said.

Avery has worked for the police department for 11 years. He was a member of the Boulder City Explorer Post 198 in the late 1980s and said being a part of that group helped him decide to go into law enforcement.

“We’re fortunate to have such a dedicated, committed staff, and Bill regularly goes that extra step to help the public,” said Boulder City Police Chief Tim Shea. “His efforts are greatly appreciated by the police officers who serve this community.”

The 50 recipients of this award were chosen by OffenderWatch out of more than 15,000 people and 3,000 agencies throughout the country.