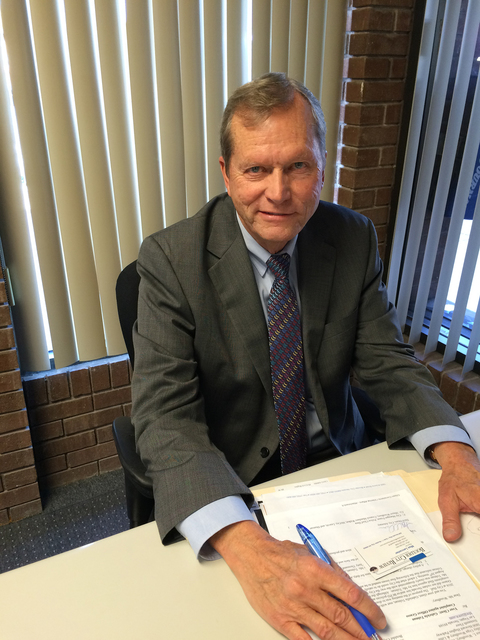 Hali Bernstein Saylor/Boulder City Review Bruce Woodbury, a former commissioner for Clark County, has left a lasting impression on Southern Nevada through his work with the Regional Transporation Commission and as the father of several politicians.

We see Melissa Woodbury political signs on the highway. We hear about our Mayor Rod Woodbury and we drive on the Bruce Woodbury Beltway. We cannot go far in Boulder City without hearing about the Woodbury family.

The patriarch, Bruce Woodbury, was gracious enough to sit down recent and share some information about his life.

“I grew up in what is called the Huntridge area,” his story begins. “I attended John S. Park Elementary, and the church I attended was next to the school. The school still stands,” he said, “but upon visiting recently I noticed the church had been torn down.”

“She attended the same school and church but claims she didn’t know I existed until she saw me playing basketball for the Las Vegas High Wildcats,” he said.

Clearly he made a positive impression because when she was up for royalty at the school’s prom she listed her date as Bruce — without his knowledge. Someone eventually told him to ask her to the dance, and it became their first of many dates.

During their sophomore year of college, they decided to marry and have been married for 52 years.

When he was a youth, it seemed his likely future was that of a doctor. His father and his uncles were doctors. So with a future of stethoscopes and scrubs in mind, he headed off to the University of Utah in Salt Lake City. It did not take long for Bruce to rethink his future.

“I did well in my studies but never liked chemistry or biology and found more interest in politics,” he said.

After finishing his undergraduate degree in political science, he packed up his things and, with his young family, headed to Stanford Law School in California.

But he also noted that both of his parents had died by the time he was at Stanford. In order to make it in school he worked a paper route, waking as early as 2 a.m. to complete his deliveries. In the summer he worked at the local liquor bottling plant. By his final year in school he was able to quit both of these jobs when he got a position as clerk at the California attorney general’s office.

Upon graduation he came back home taking a job clerking for Judge Howard Babcock, and moving to Boulder City in 1978.

“Judge Babcock was a great judge,” Woodbury said. “Under him I learned a lot, watching the attorneys on both sides prepare and present their case, and helping him write opinions.”

His career as Clark County commissioner began in 1981.

“Bob Broadbent, former city councilman and mayor of Boulder City had been appointed by President Ronald Reagan to serve as commissioner of the Bureau of Reclamation,” Woodbury said. “This left an empty seat on the commission and, by law, Gov. Robert List had to appoint someone.”

He recalls that it came down to him and Henderson City Councilman Kent Anderson.

“Rumor was that Bob supported Kent but Bob’s wife supported me.” In the end, List appointed Woodbury.

He served on the commission from 1981-2009, longer than anyone in history. During that time, he faced many tough issues, the most challenging being transportation.

“I saw that our transportation system was set up for a population of 250,000 instead of the true population that was much larger.” He said he knew that a more meaningful Regional Transportation Commission would be needed.

“The plan we came up with to fund it was called fair share funding and called for a room tax, development tax, vehicle registration tax, a portion of sales tax and a gasoline tax.”

He and his supporters campaigned heavily to get needed support. “It felt like we gave a million speeches,” he recalls.

In the end, 64 percent voted in favor of the funding plan.

Woodbury also prevented development in the Eldorado Valley near Boulder City and recommended the transfer of the land from the federal government to Boulder City.

“I don’t know of any public servant who represents fairness … a person who is not partisan, a person who speaks of what is good about politics more than Bruce Woodbury,” said Sen. Harry Reid.

Despite his many accomplishments, Woodbury said what he will likely be remembered most for is the fact that he was in office during two FBI investigations involving fellow commissioners, Operation Yobo and Operation G-sting.

“It felt odd having people congratulate you for being such a great commissioner just because you didn’t break the law,” he said. “I mean, isn’t that the very least that should be expected?”

Yet no matter how busy he was, Woodbury always had time for family.

“I was always able to get to basketball games and music recitals.”

Two of his seven children, Rod and Melissa, followed him in politics. Rod Woodbury is now serving as mayor of Boulder City and Melissa Woodbury serves in the Nevada Assembly.

When asked if retirement is on the horizon at age 71, he said that he already doesn’t do as much as he used to but enjoys practicing law, serving on several boards and doing some pro bono work for nonprofits and individuals. He also enjoys the time he spends with his children and 22 grandchildren.

Nathaniel Kaey Gee resides in Boulder City with his wife and six kids. He is a Civil Engineer by day and enjoys writing any chance he gets. You can follow his work on his blog thegeebrothers.com