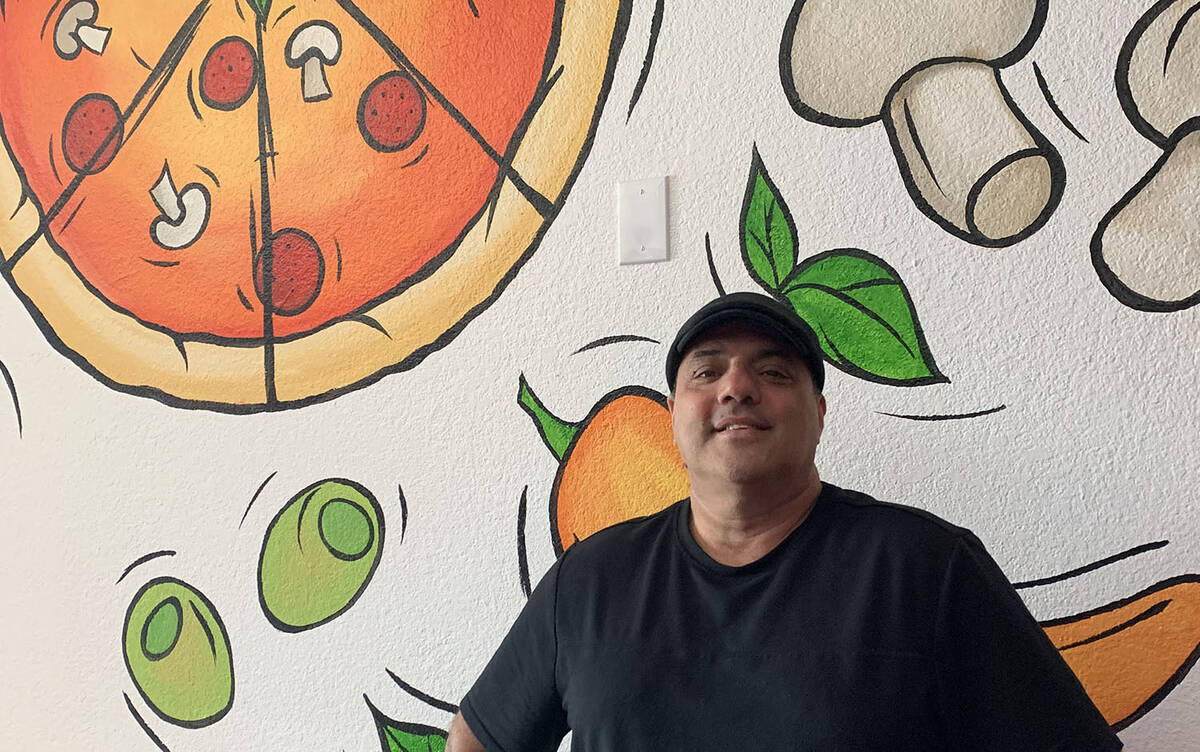 (Hali Bernstein Saylor/Boulder City Review) Vincenzo “Vinny” Cimino stands in front of the hand-painted mural that was created for his restaurant, Vinny’s Pizzeria, when it was featured on the Food Network’s show “Restaurant Impossible.” 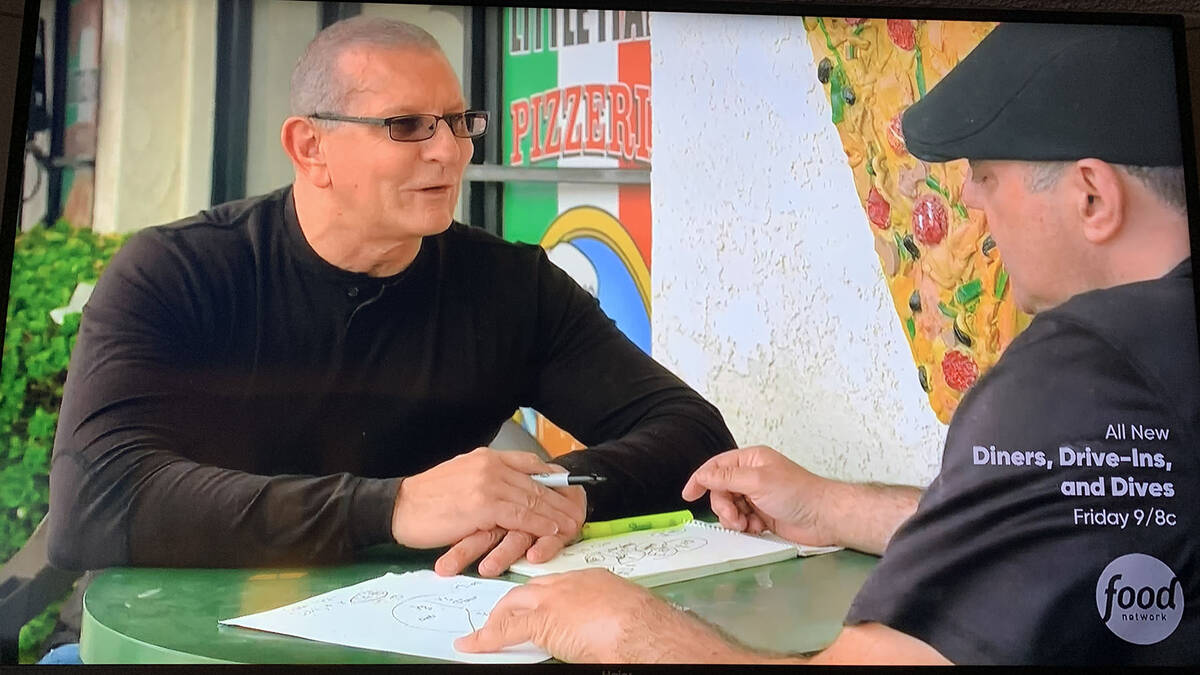 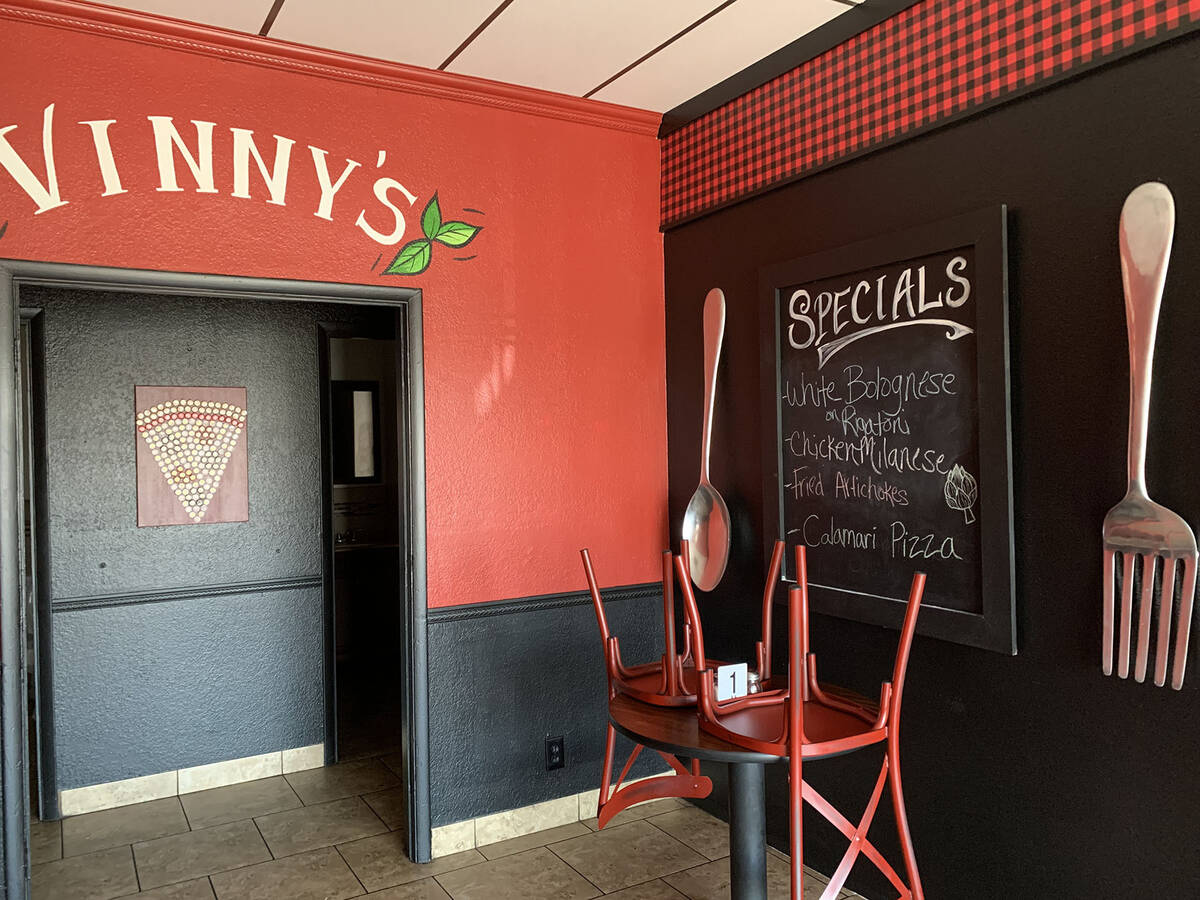 (Hali Bernstein Saylor/Boulder City Review) A more cohesive color scheme was part of the changes made to Vinny’s Pizzeria, 1312 Boulder City Parkway, when it was featured on Food Network’s show “Restaurant Impossible.”

The show, which first aired July 14, was taped in mid-April, and featured host and chef Robert Irvine helping Cimino rediscover his passion for cooking for others.

“The restaurant business ain’t easy and now people know the story,” he said.

Cimino said having Irvine help him with the pizzeria was never a matter of trying to turn around a struggling restaurant. Instead, it was about helping him rediscover the joy in his work.

Cimino admits that he was just going through the motions and hasn’t put his heart into the business since the death of his mother about five years ago.

“When I first met him (Irvine) he knew I had lost my passion, that I was not happy anymore.”

Irvine also arranged for two of Cimino’s brothers to visit and speak with him. Though they had tried in the past to get him to change, Cimino said he was too stubborn to listen.

Cimino said much of the advice that Irvine dispensed was not shown during the episode but that he definitely listened.

“The off-camera stuff he told me was amazing,” Cimino said.

Among the changes were four new recipes on the menu, bringing in a point-of-sale system to help track orders, costs and inventory as well as how he operated his kitchen. Naturally, the restaurant itself also changed, with new decor and an expanded kitchen.

Cimino said he also wouldn’t trust anyone else with his treasured recipes, devoting too much time to the restaurant and not enough with his family.

As a result, he was repeating history, plunging himself into his work as he did when his father died when he was 14 years old. Missing out on time with their father was something Cimino said he never wanted for his own five children.

Cimino praises his wife of 30 years for standing by him through all the ups and downs and said he is working on getting qualified staff members so he can take her to Hawaii.

He also credits his landlords, Carole Gordon and Karen Gordon, and uncle and aunt, Rich and Cynthia Pozesky, for their constant encouragement.

Aside from helping him with the business, Cimino said he was glad the show helped bring more attention to Boulder City.

Vinny’s Pizzeria is at 1312 Boulder City Parkway. It is open from 4-9 p.m. Tuesday through Sunday.