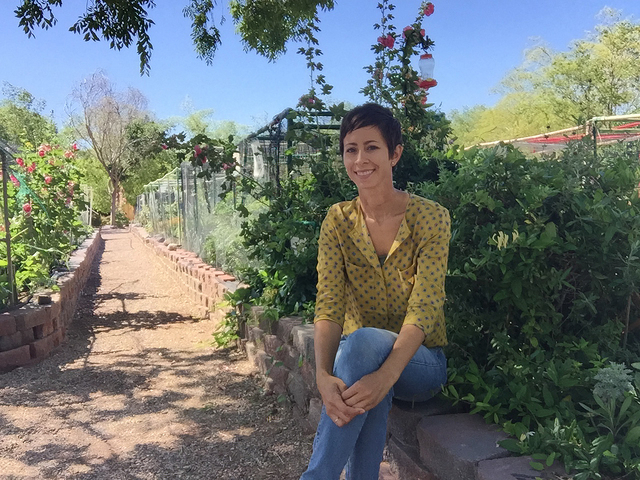 Lifting a gallon of milk. Sitting in a room with the lights on. Walking around the block.

Simple things like these have become major chores for Gabi Tolman of Boulder City.

Even watching the news, looking at Facebook or dealing with the stresses of everyday life sap her energy.

Tolman, 30, has Ehlers-Danlos syndrome, a heritable genetic defect in a person’s connective tissue, the tissue that provides support to many body parts such as the skin, muscles and ligaments, according to the Ehlers-Danlos Syndrome Foundation.

“I knew my whole life that there was something wrong with me,” she said.

She said from the time she was a little girl she experienced symptoms such as stomach problems, painful joints, headaches and assorted random problems.

“Nothing in itself that screamed chronic, degenerative or genetic condition.”

There are six major types of the disorder, which are classified by their manifestations and symptoms. Ehlers-Danlos can affect tissue, arteries, blood vessels, vital organs and the central nervous system.

According to Tolman, symptoms can range from mildly loose joints to life-threatening situations.

The Ehlers-Danlos Syndrome Foundation said research has shown it to affect from 1 in 2,500 people to 1 in 5,000. However, recent clinical experience is showing the syndrome to be more common.

It affects both men and women of all racial and ethnic backgrounds.

The foundation states that the prognosis depends on the type of the disorder and the individual, and that each case is unique. There is no known cure, but there are treatments for the symptoms and preventive measures that are helpful for most.

For Tolman, the treatment includes surgery. She has had 10 operations, the three most recent procedures were to fuse her parts of her spine and to dissect her spinal cord, which had detethered itself from her spinal column and whose fibers had woven through the vertebra and wrapped around vital organs.

“It felt like someone was sitting on my hips,” she said. “When I went to the … surgeon and he showed me the problem, he was sticking needles down my legs and I couldn’t feel it.”

While getting scans to see what repairs were needed to her spine, it was discovered Tolman also had spina bifida, which was corrected surgically.

She also has difficulty regulating her body temperature and has less blood than normal, prompting IV therapy three times a week.

Tolman’s “medical journey” began when she was a teenager and learned she had scoliosis. She started treatment for that, and it got to the point where they wanted to put rods in her back when she was in high school.

However, she came from a background of strong, stoic women who just dealt issues as best as they could.

Tolman said she was raised by a single mother and didn’t have the luxury of being sick.

When she was pregnant with her second son, her shoulder began dislocating when she was holding her first baby or while carrying a gallon of milk.

“I was shocked, like ‘What’s going on and how did that happen?’ And I was just as shocked when I let go of the milk and it popped back in.”

Because her joints were so loose, Tolman said she could easily pop her shoulders back into place.

Tolman said it took five years from the time she started having dislocations until doctors determined she had Ehlers-Danlos syndrome. She was 25 years old.

“I was ingrained with the mentality of everyone has pain … and that everyone has to overcome stuff with their bodies,” she said. “I kind of was negligent in my needs, in my body’s needs. Even after my diagnosis I didn’t listen to my body.”

She had a stroke in January 2014 and then began having myoclonic seizures, little convulsions, as many as 150 a day. The spinal surgeries, however, have reduced the number dramatically.

Today, however, her physical and mental well-being are a primary concern for her and her family.

She and her husband, Garrett Tolman, and their two sons, Lucas, 10, and Logan, 8, moved to a smaller home that would be easier for her to get around and care for.

Gabi Tolman has done her best to eliminate all negativity from her life and drinks vegetable juice daily to boost her vitamin intake because her body has difficulty absorbing nutrients.

“It feeds me physically, mentally and spiritually,” Tolman said.

She said walking helps take the edge off the pain in her nerves, strengthens her muscles and joints, and being outside boosts her vitamin D levels.

It also helps give her a sense of accomplishment. She said situations such as hers can leave a person feeling like they can’t accomplish anything. So she sets goals, no matter how small.

Last year, she walked more than 400 miles and recently, she completed her second walk around the map of Boulder City.

For Tolman, who was bed bound and in a wheelchair for three months, walking the map is a “big thing.”

“It helps to have little milestones,” she said. “I didn’t want to stay at home and let my health deteriorate.”

It’s also a way for her to help raise awareness of Ehlers-Danlos syndrome, which observes its annual awareness month each May.