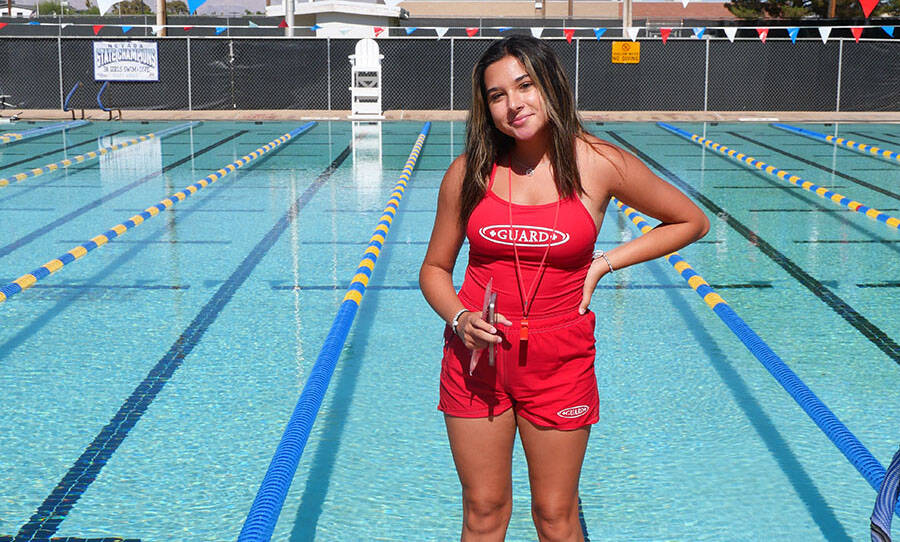 (Owen Krepps/Boulder City Review) Lifeguard Abby Rodriguez poses by the Boulder City Pool, where she saved a 5-year-old's life a decade ago.

“I remember I was in my swim class and the teacher made us stop down and get rings one person at a time. I remember looking over and seeing a girl go under; after a few minutes I realized she was not coming back up so I went down and grabbed her. By the time I came up with her the lifeguard was there,” Rodriguez said.

Fast-forward 10 years, Rodriguez is fittingly a lifeguard at the same place where she saved a life a decade ago. As a rising junior at Boulder City High School, Rodriguez is pursuing a career in the medical field and is CPR and automated external defibrillator certified.

Despite being a lifesaver at age 6, Abby Rodriguez says the event from her childhood did not motivate her in going into the medical field.

“When I was little I wanted to be a teacher and didn’t want to go into the medical field when I was that young.”

Today, her goal is to become a pediatric surgeon.

According to her father, there isn’t any one event that changed Abby Rodriguez’s mind about her future career.

“Over the years she’s shown more and more interest in medicine,” he said. “She first took an interest in medical-related shows like “Grey’s Anatomy,” “Chicago Hope” and “ER” around 12 or 13 years old. We didn’t take serious notice until she starting asking for gifts like a suture practice kit and a stethoscope for her birthday and Christmas.”

Abby Rodriguez attended the National Youth Forum of Medicine last month in North Carolina and will be participating in the Congress of Future Medical Leaders later this summer. Next year she plans to take an advanced medical program for high school students at John Hopkins University, Don Rodriguez said.

Outside of lifeguarding, she plays volleyball and softball at Boulder City High.