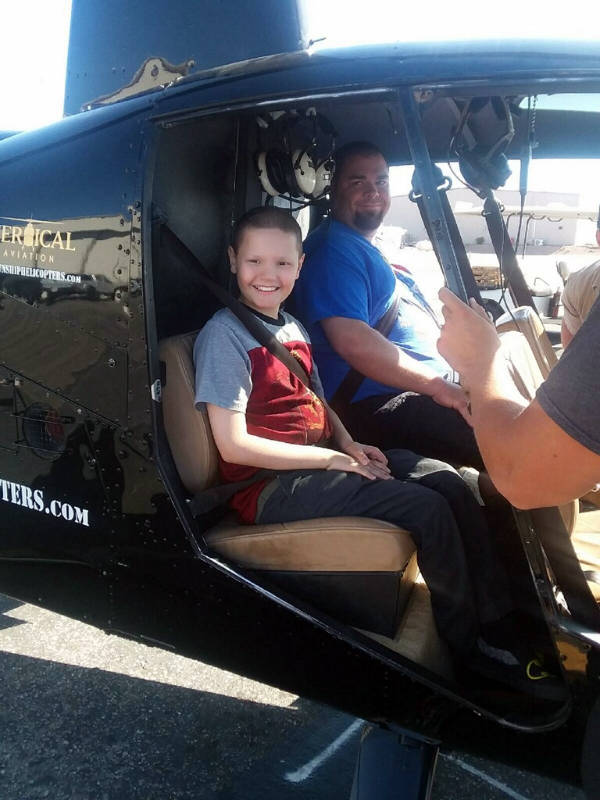 Gunship Helicopters Nik Davison and his dad, Calvin, get ready to go for a helicopter ride. 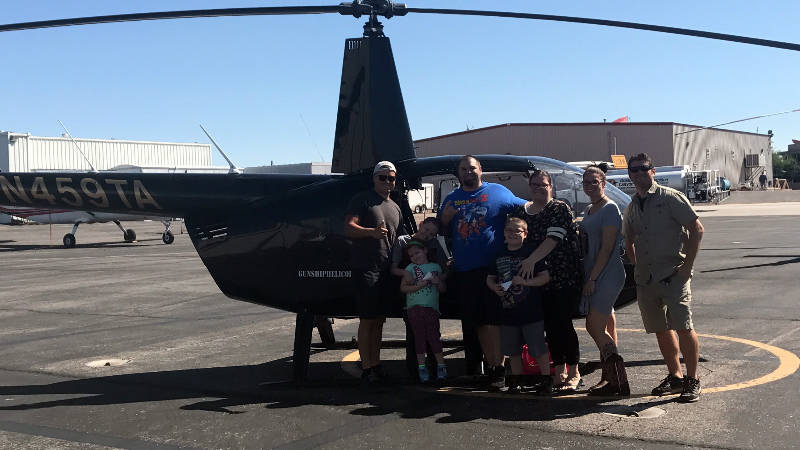 Nik Davison was diagnosed with acute lymphoblastic leukemia in November 2016 and has always wanted to ride on a helicopter.

“I’ve always wanted to be in the air,” he said.

Nik has flown in an airplane before but never a helicopter and said that he believed it was the best way to experience the feeling of flying and having air rush past him since people do not have superpowers and cannot fly.

He and his family live in Henderson but are friends with Carmela Saenz, employee at Gunship Helicopters/Vertical Aviation LLC in Boulder City.

“My family has known the Davison’s for several years now,” she said. “A few months ago Angela (Angie) Davison (Nik’s mom) posted some of Nik’s bucket list on Facebook. After coordinating with her, we were able to get him a gift certificate for the flight on his birthday in July. Unfortunately it was too hot to fly him the past few months. But now that the weather is cooling off we were excited to finally give him his flight.”

On Sept. 14, Nik was able to fly and said that it was awesome feeling the wind rush by and the air in his lungs, as well as seeing how small the people were on the ground. He also enjoyed flying over the Colorado River.

“Anybody that has had cancer, especially a 10-year-old boy, your heart goes out to them and you want to do something for them,” said Bob Fahnestock, one of the helicopter company’s owners.

He added that Nik is “extremely brave,” and he wanted to take the minds of him and his family off the situation for a little while.

Nik’s mother said that the best of the experience was getting to put a smile on her child’s face.

“Cancer’s hard,” she added. “It’s hard on the whole entire family but especially hard on the kid who has it.”

Nik is almost finished with his active chemo treatment and will soon begin maintenance chemotherapy.

Gunship Helicopters/Vertical Aviation LLC offers a helicopter door gunner experience to the general public, giving people an opportunity to shoot a gun from a moving helicopter in a private 70-acre shooting range in the Mojave Desert.