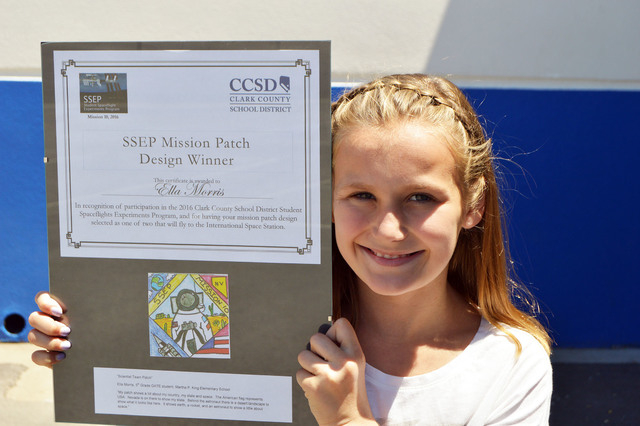 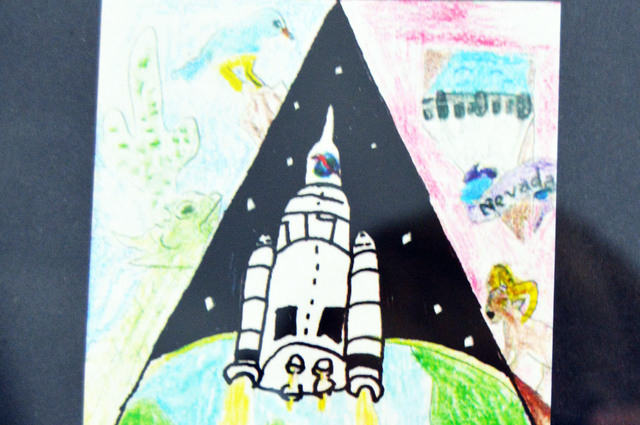 The artwork of Boulder City students is going into outer space.

Last week at the Desert Research Institute in Las Vegas, two students from King Elementary School were selected to have the patches they made in class go 249 miles up in orbit to the International Space Station.

The Student Spaceflight Experiments Program asked students from Clark County to make a mission patch that most exemplified Nevada and space science.

A mission patch is an emblem worn by astronauts during a flight.

Both patch winners, as well as two out of the other three finalists, were from King Elementary in Boulder City.

Ella said she had no doubt that she was going to win. “I really like to draw and when I am not in school I am drawing,” Ella said. “I thought I was going to win because everyone in my class said that I would.”

Julia’s mother, Fabia Tregnan, said that her daughter was incredibly excited about winning the patch competition. “Julia is so excited about winning,” Tregnan said. “Her and the teachers worked so hard on this and it is really exciting that four of the five finalists were from Boulder City.”

Julia and Ella were not at the award ceremony May 4, and the girls were told about their awards at the Pali Institute’s science and education camp in California. Ella said when she and Julia learned they won every kid at the camp was screaming for joy. “Julia and I couldn’t stop screaming,” Ella said. “It wasn’t just us; all the kids were jumping and congratulating us saying how happy they were that we won.”

The patches at the elementary school were a collaborative creation between Gifted and Talented Education program teacher Anne Marie Eby and art teacher Stacy Mahan. Mahan said she wanted students to create patches that represent the state they come from and outer space.

“I really tried to emphasis the importance of Nevada since a lot of the kids are learning state history,” Mahan said. “I also wanted to emphasis space so I brought in a bunch of pictures of astronauts and rocket ships to show the kids what that looks like.”

Mahan even went one step further by showing the students pictures of actual mission patches from space flights like Apollo 11 and 13.

Julia and Ella both captured an aspect of state and space in their patches. Julia’s patch shows a rocketship in the center with the Hoover Dam and bighorn sheep represented on the side.

“I drew the bighorn sheep and the Hoover Dam because I see them all the time in Boulder City,” Julia said.

Ella drew an astronaut in the center of her patch with the Mojave Desert in the background. She said the desert was important to draw since it is where she lives.

“The astronaut is in the desert because we live here in Nevada and I wanted to show our home.”

Patches were not the only thing students were competing for. The Student Spaceflight Experiments Program also had seven schools from Clark County submit experiment results that would be taken up to the International Space Station. Students from King Elementary submitted multiple experiments, but none were selected in the top three. Eby said that doing the experiments was a tough and rewarding experience despite the fact that they did not get selected.

“The kids worked really hard on the experiments,” Eby said. “The work we did was very good and it was all the students’ ideas.”

The experiments students submitted touched on a number of topics such as can spiders spin webs in microgravity and how will bread mold in microgravity.

Mahan said there is a lot of pride after the school’s success in the patch competition.

“The kids are so proud of Ella, Julia and the other kids that almost won,” Mahan said. “The students just think it is really cool that four out of the five finalists went to King Elementary.” The announcement of the patch competition was part of the Desert Research Institute’s May the Science be with you event, which taught children the importance of science, technology, engineering and mathematics through “Star Wars”-themed science projects.