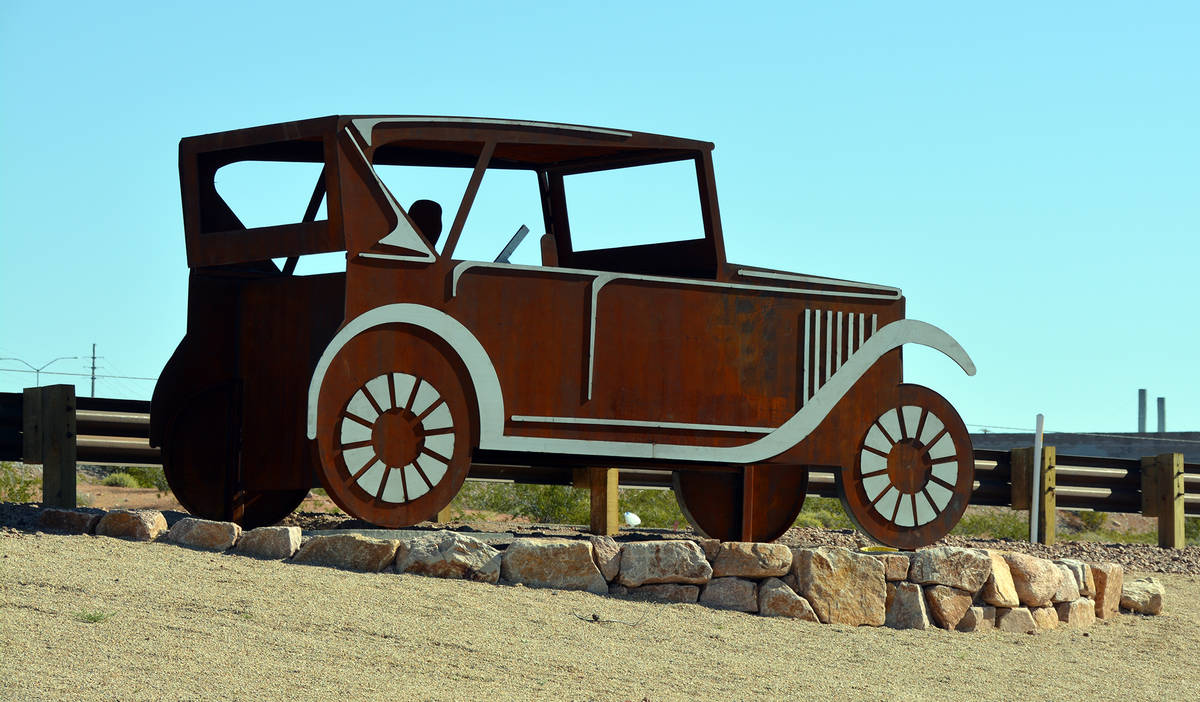 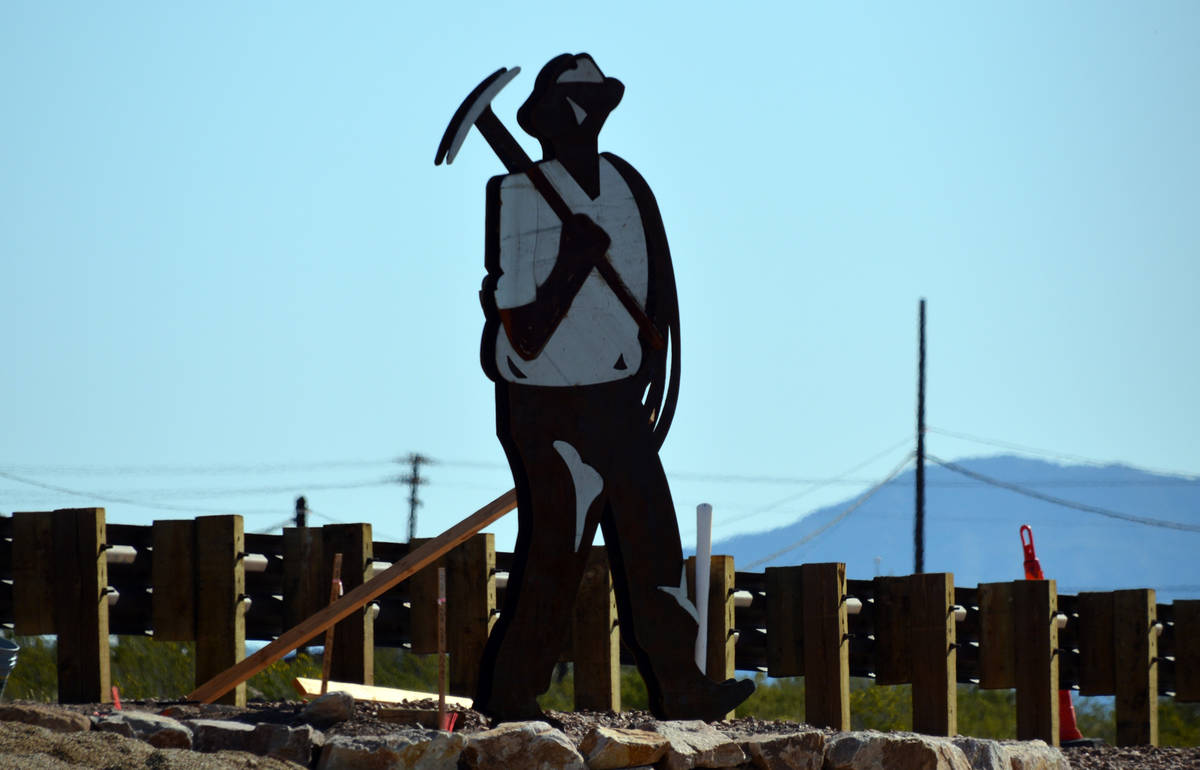 Celia Shortt Goodyear/Boulder City Review Miners in hard hats were created out of two types of steel and installed in the median between Veterans Memorial Drive and Gingerwood Street as part of the complete street project. 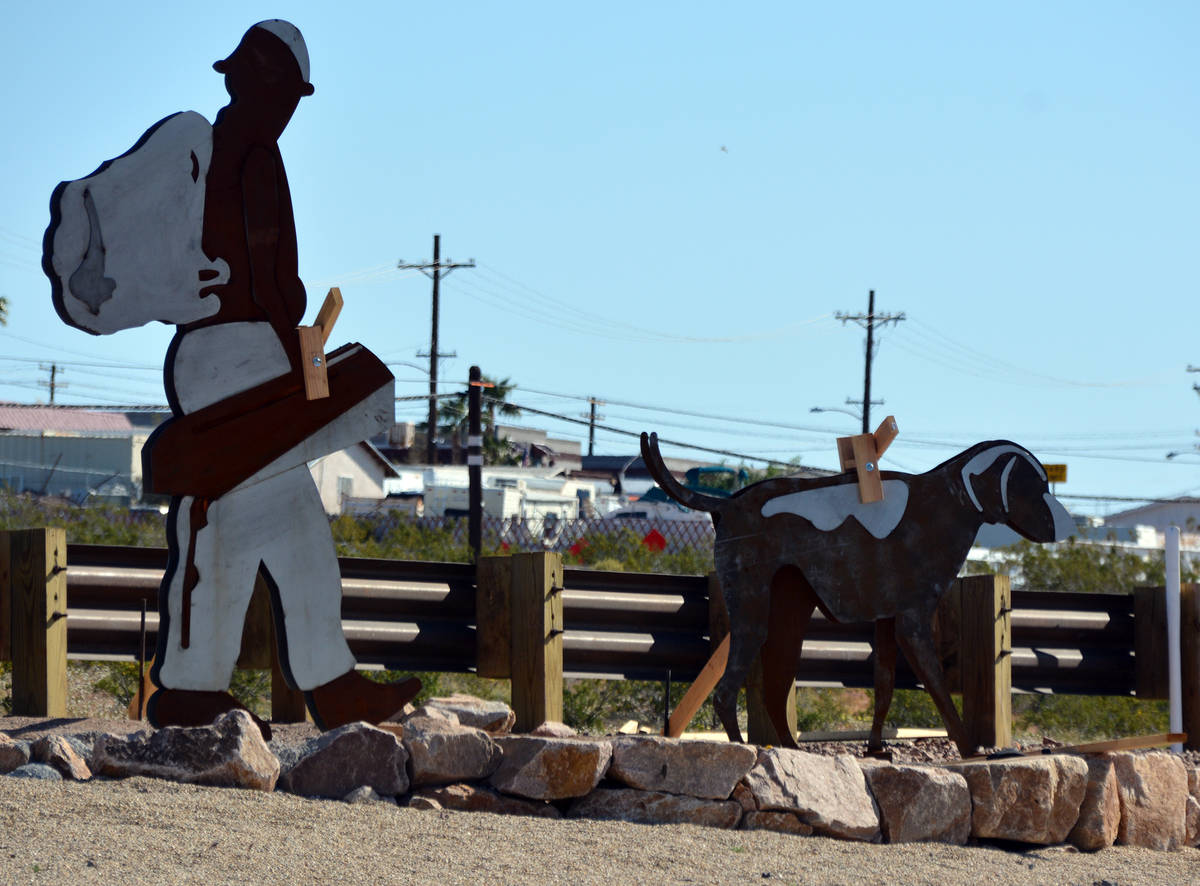 Celia Shortt Goodyear/Boulder City Review Metal sculptures installed as part of the complete street project on Boulder City Parkway include Hoover Dam workers and the dog that served as their mascot.

The city’s past comes alive once again in a larger-than-life history lesson that was just installed in the median along Boulder City Parkway.

The sculpture features several workers in hard hats who are carrying equipment, a car and the canine mascot that belonged to all the dam workers.

Erick Sanchez, president of General Design and Construction that fabricated the metal sculptures, said telling the story of the dam workers was an important part of the complete street project for Boulder City.

If the art looks a little familiar, it’s because the sculptures duplicate pieces installed as part of the Interstate 11 project that were also created by the Las Vegas-based company, Sanchez said.

“The same story was trying to be told,” he said. “It was also interesting for us to learn about the history.”

Sanchez said Cary Baird, a principal with Stantec, the landscaper for the Interstate 11 project, designed and helped them create the pieces of art.

Fabricating the sculptures took 2,227 hours over a period of about four months.

“It required a lot of material,” Sanchez said.

Sanchez said two types of steel were used to help create the contrast in color.

The ½-inch thick pieces of steel were cut using a laser as well as oxygen and acetylene tables. Once cut, the pieces were welded together to give the art a 3-D appearance.

Sanchez said General Design and Construction specializes in metal fabrication and is also responsible for many of the pieces of art along Interstate 15 in Las Vegas and highway directional signs.

The $17.5 million complete street project, which is scheduled to be completed in May, is renovating the street and sidewalks on Boulder City Parkway from Buchanan Boulevard to Veterans’ Memorial Drive. It includes medians, pedestrian crossings, curbs, gutters, separated sidewalks and new driveways to make the stretch safer and more aesthetically pleasing.

The Regional Transportation Commission of Southern Nevada and Nevada Department of Transportation are responsible for the majority of the costs involved. The city contributed $596,780 for upgrades to the sewer main and water systems, including new fire hydrants and an irrigation system.