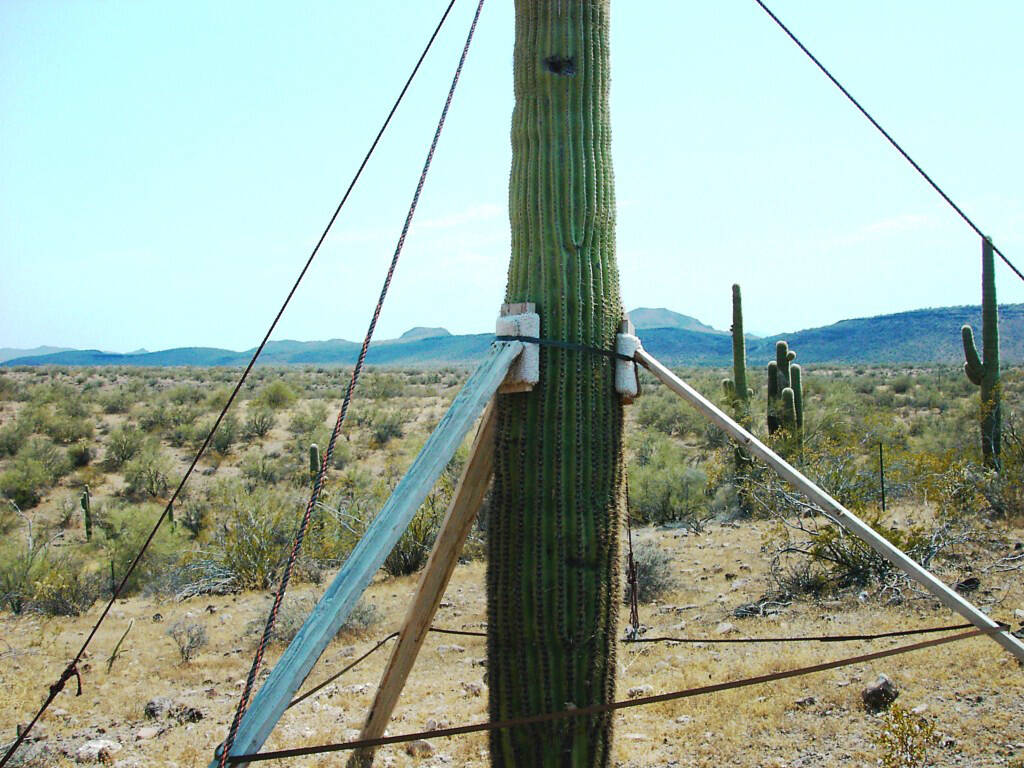 (Bob Morris) When a saguaro starts to lean, it needs to be propped up. Then, water should be applied further from the base to encourage root growth. 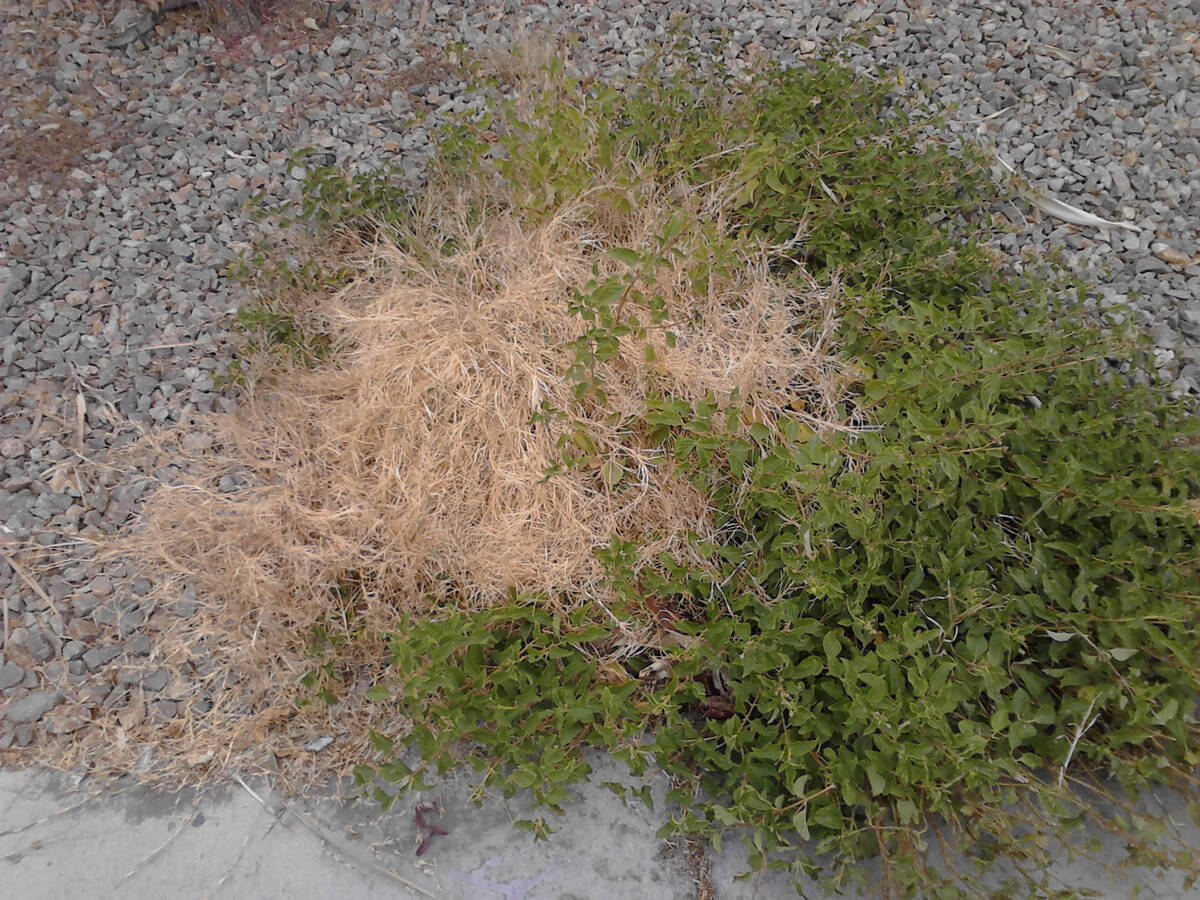 (Bob Morris) Bermudagrass, seen in its dormant stage, can be difficult to eradicate but it is not considered invasive. It may not be planted in Clark County because of how it affects people’s allergies.

A. I am not familiar with the Maki variety of yew pine. Traditional yew pine has been successfully grown in the desert for decades and used to be a popular landscape plant. Checking with some of the nurseries and botanical gardens, I am not sure if this dwarf variety of yew pine is considered “dwarf” because it grows slowly or because it’s naturally small. Some varieties are considered dwarf because they grow slowly but they will ultimately reach the same size as the traditional yew pine. They look good if they are grown in the right location.

Traditional yew pine is considered a tough mesic evergreen tree that grows slowly to a mature height of 40 feet; they are not a desert plant. They can handle our hot summers if they get afternoon shade and are not surrounded with surface rock. They grow better in soil amended with compost and covered in wood chips. All of them can be pruned and hedge sheared to keep them smaller. Popular east of the Mississippi, yew pine is considered a tough plant there.

If you select that for a planter, plant it on the east or north side of a home. Don’t surround it with rock mulch; instead cover the soil with wood chips after planting. It will not handle full sun if planted out in the open without some shade in the afternoon.

The dwarf form should be planted about 3 feet apart to make a hedge and can be maintained at about 6 to 10 feet tall and 3 feet wide for many years.

Q. We have a 20-plus-foot-tall saguaro starting to lean. I now realize it’s because I was watering it at its base over the last few years due to high summer temperatures. Will it stop leaning if I stop watering it at the base? Will it straighten itself out if I water away from it on the opposite side?

A. First, support your saguaro so it doesn’t topple over. The roots of your saguaro are only about 2 feet beyond where the water is applied. Water this tree, about 2-3 feet deep, only four times next year; once or twice in the winter and two or three times during the summer. That’s all. It gets the rest of its water from internal storage when it needs it.

Water the saguaro further from its base to encourage its roots to grow further from the stem to support it better. There is not much you can do about it starting to lean. If this plant is on an irrigation clock, I would get rid of any drip emitters and start watering by hand. Use an inexpensive stationary sprinkler on the end of the hose, applying water for about two hours, and adjust its spread to about 8 feet. Don’t remove supports until the roots grow out further. That might take two or three years.

Many desert plants like saguaro translate applied water into top growth first. Root growth is secondary. In the wild, the roots of saguaro might grow to a distance as much as eight times its height. Compare that to native ash trees growing in the eastern United States at about two times their height. Desert plants are more focused on capturing rainfall quickly and converting that water into growth than native trees growing east of the Mississippi. Their roots need a large area to do that.

Q. Why are my new Queen palm spears bending over instead of remaining upright? It’s not the wind and they get watered every other day. Otherwise, they’re healthy.

A. Queen palm is very pretty and graceful but better suited to landscapes in central to southern Florida and coastal California and not hot, windy, dry locations like our desert or any other desert. They get “ratty looking” when used in our climate and exposed to our more adverse desert environment.

They will grow to 50 feet in their tropical and wetter native South American environment, but 30 feet is all you can probably expect from them in our desert climate. Once they produce ratty growth at the top it’s there for two or three years until it’s pruned off.

Plant them in the eastern part of your landscape where they can get morning sun and shade in the afternoon. They will be better looking. Avoid planting them in hot, windy locations. They have feathery leaves that quickly dry and brown in the heat, low humidity and wind of the desert.

Anything you can do to improve their health helps them tolerate our desert climate more. They begin to yellow and weaken due to our desert soils. This means a fertilizer plus an iron application in the spring of each year. They like to have their “toes” in water but don’t like to be drowned with irrigation so keep water within their reach but avoid putting it directly at their base.

I have seen it growing best when protected by courtyards and east-facing walls. When they grow above these walls or courtyards is when they start to look ratty.

Q. I read invasive plants are becoming a big problem everywhere in the U.S. and nurseries are selling them. When buying plants from the nursery, how can I know which plants are invasive and which ones are not?

A. Lists of invasive plants can come from many sources including government agencies (natural resource conservation service offices and state departments of agriculture), nongovernment entities (such as plant clubs and associations like cactus or native plant societies) and quasi-governmental sources (water districts). Most invasive plant lists are advisory but some have a regulatory “bite.” Nurseries must adhere to these “recommendations” or face a fine from those that end up in state and local regulations.

As an example, sweet potatoes were introduced from Asia, but they have not become invasive. Lantana, introduced from tropical Central and South America, is considered invasive in wet southern Florida but not in very dry Southern Nevada where it can be controlled with irrigation. Fountain grass, an ornamental grass that tolerates very low rainfall, should be considered invasive in desert habitats, yet some nurseries sell it. Why? Consumer demand, ignorance or lack of conscience.

The usual barrier to becoming invasive in the Mojave Desert is water availability. In the case of our Mojave Desert, once introduced plants have access to water some may find they can grow and reproduce like gangbusters. Think about residential landscapes along the Colorado River or plants that have access to water from wetlands versus in the middle of the desert with no access to natural sources of water. 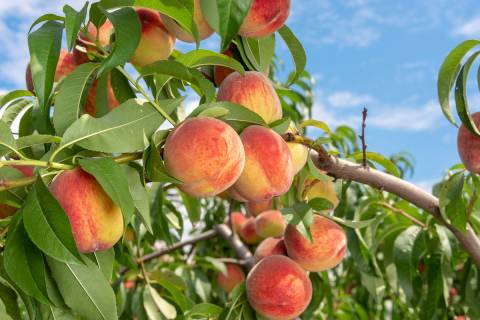 Take this quiz and see how you stack up against other desert gardeners.