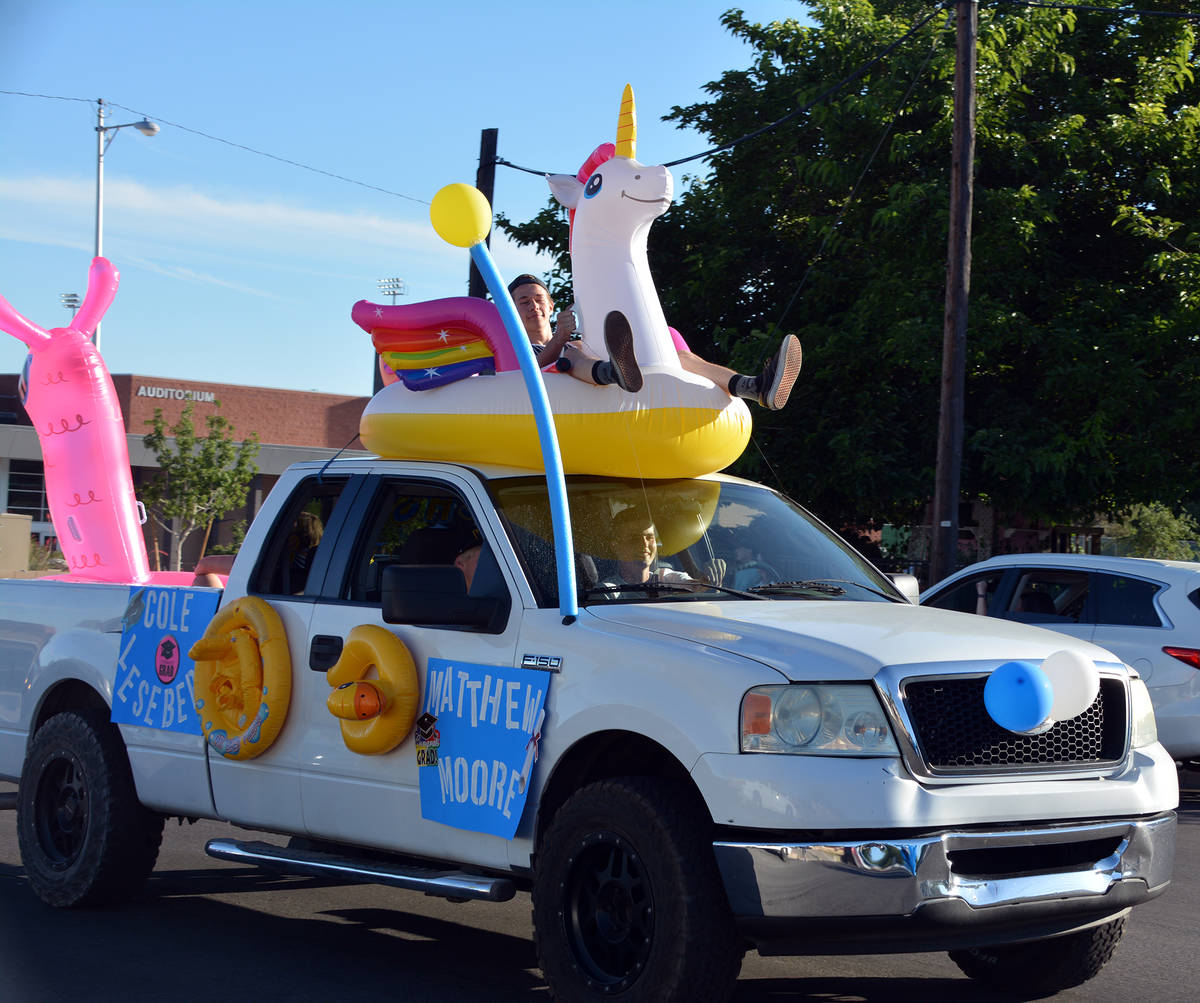 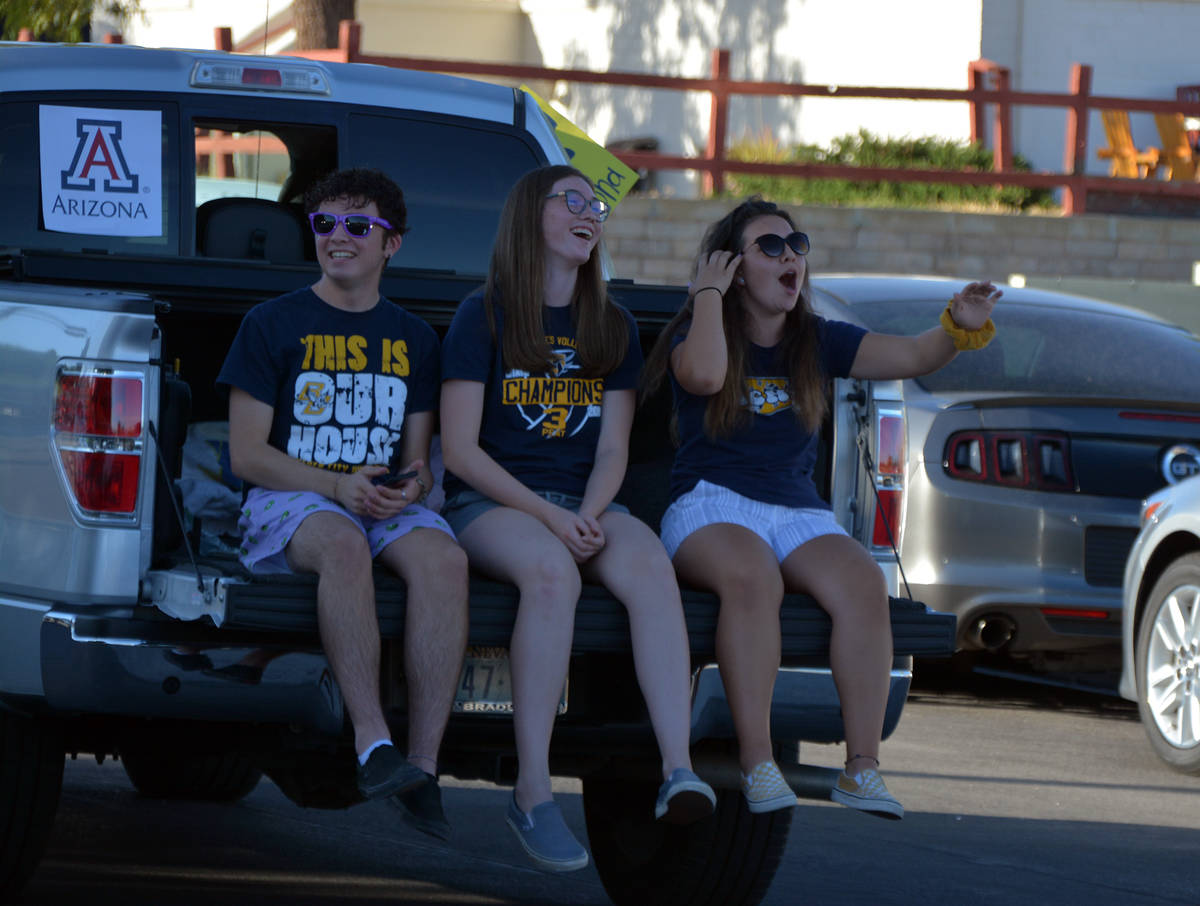 Celia Shortt Goodyear/Boulder City Review Gage Madrid, left, and classmates Raegen Herr, center, and Makaela Perkins laugh and wave to spectators during the Boulder City High School graduation parade May 21. It went from school through the downtown area and then around the elementary schools and junior high school. 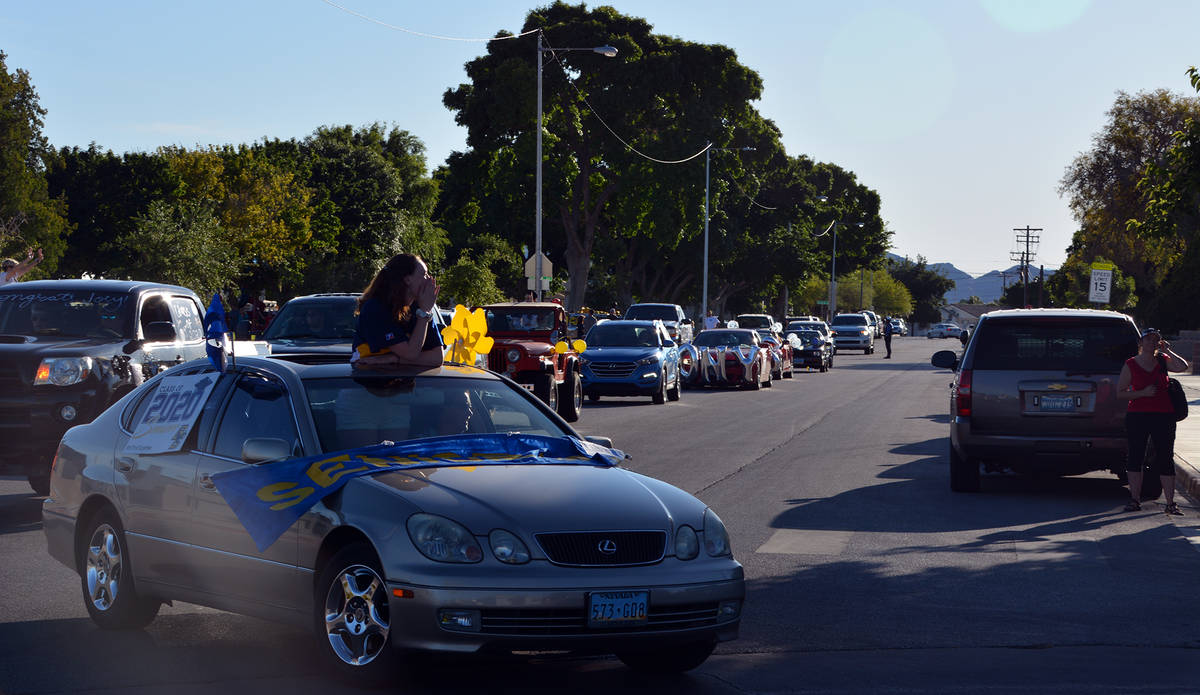 Celia Shortt Goodyear/Boulder City Review Cars and members of the class of 2020 fill Fifth Avenue on May 21 for the Boulder City High School graduation parade. 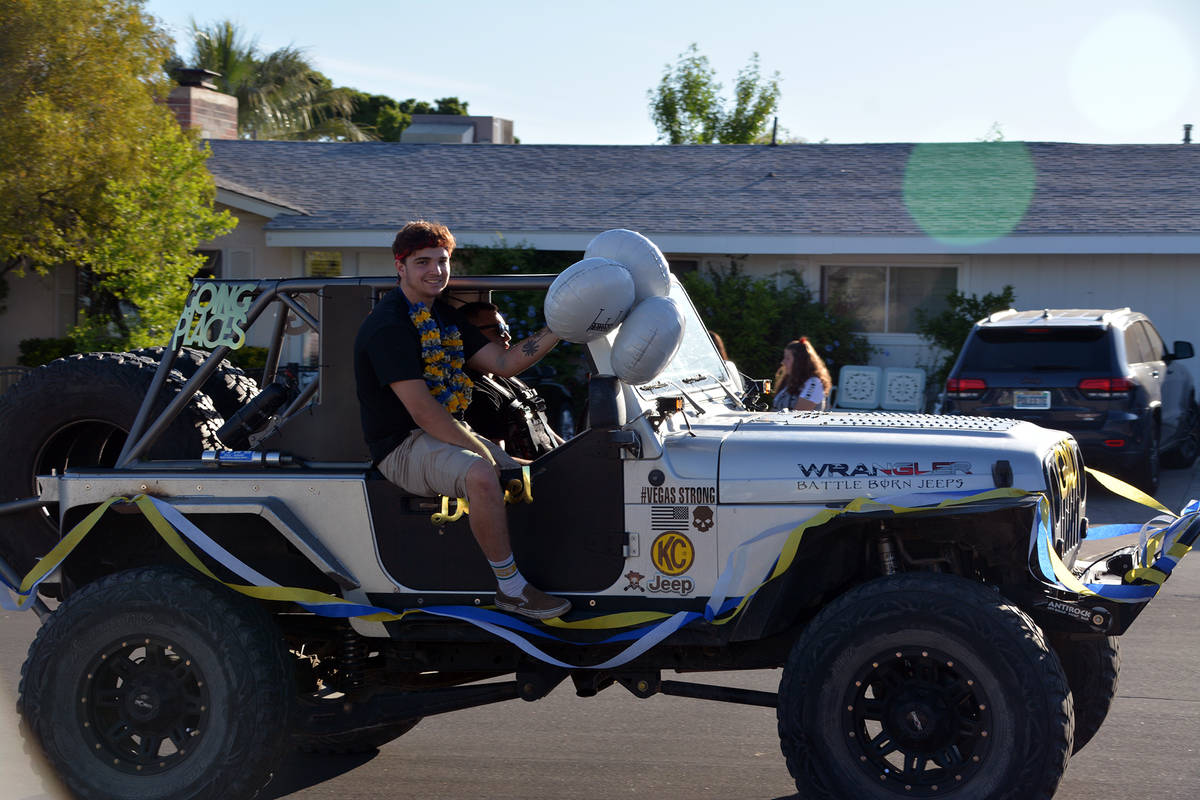 Celia Shortt Goodyear/Boulder City Review Graduating senior Henry Jenicke participates in the Boulder City High School graduation parade May 21. The parade went from the school through downtown Boulder City and back around the elementary schools and junior high school. 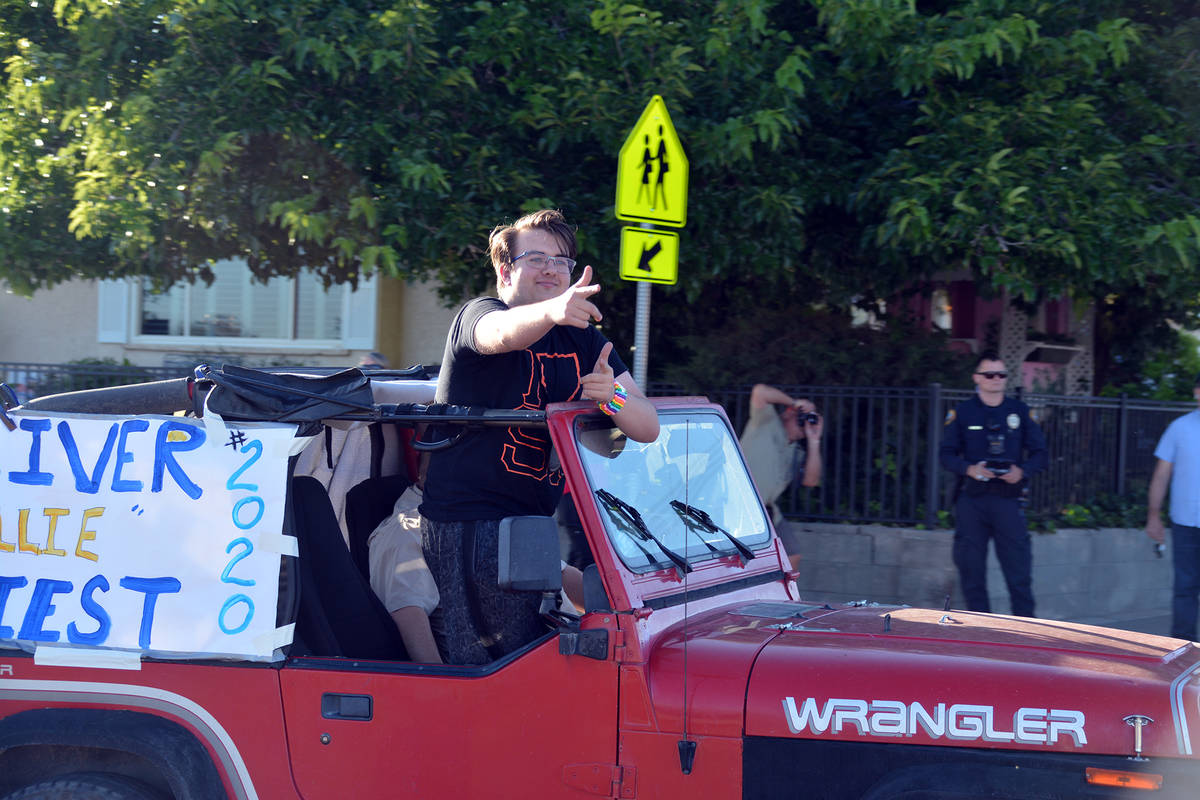 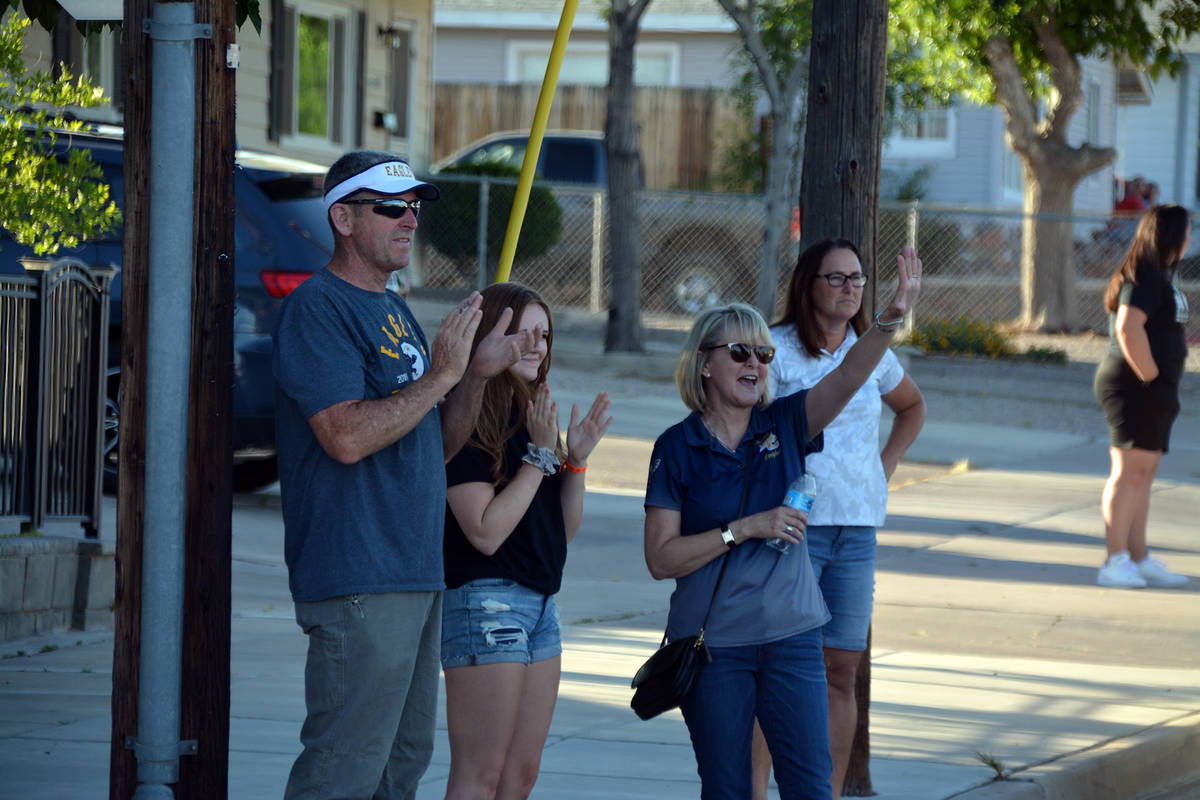 Celia Shortt Goodyear/Boulder City Review Spectators at the corner of Fifth Street and California Avenue cheer on the graduating seniors during the Boulder City High School graduation parade May 21.

Graduation day for Boulder City High School’s Class of 2020 was different this year as the students and parents celebrated with a parade instead of a traditional commencement ceremony.

Principal Amy Wagner said the day was “bittersweet,” but she was thankful they could celebrate the students with a parade.

“This is just one of the many celebrations because we will have some type of graduation, hopefully in the next month,” she said.

For the parade, held May 21, graduating seniors were in decorated cars and trucks and drove through town. Spectators were able to watch from their yards and vehicles.

The graduating seniors were thankful for the event.

Samantha Medrano said the parade was better than not doing anything for graduation, and Trinity Oeland said she was happy about it.

Sydney Krumm said the parade showed that people in the community cared about the Class of 2020.

“I think it helps them know that their accomplishments haven’t been diminished,” said Tami Marino whose son, Henry Jenicke, is in the Class of 2020. “There is so much uncertainty about the next few months … kids need to move on and having at least one thing we can count on with these students is important.”

The event was organized by Kim Cox, who has a child graduating this year. She is also a counselor with the Clark County School District.