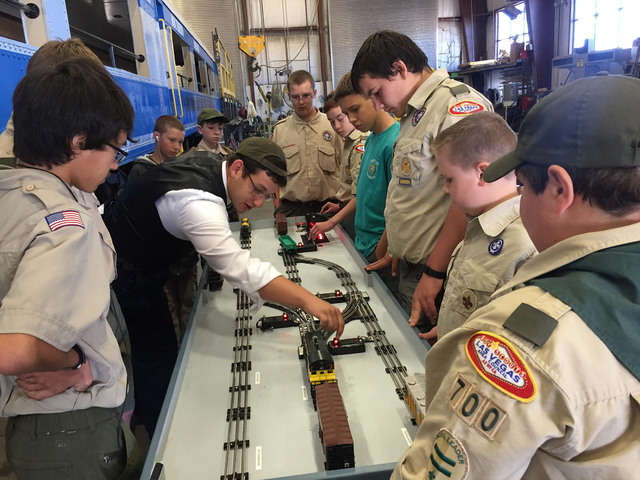 Boy Scouts from across the Las Vegas Valley made their way to the Nevada State Railroad Museum in Boulder City on Saturday as they learned the ins and the outs of the industry for their railroad merit badges.

“Railroading is becoming a dying art form, as it were, so it’s good to get the boys out here to see the importance of not only the history of railroading, but the safety aspects of it,” said Kelly Williams, assistant Scout master of Troop 700 of Las Vegas.

Throughout the day, Scouts learned an array of railroad elements, including safety, engineer training and identifying various types of rail cars. Williams said the boys will work on their requirements for the next couple of weeks in order to receive their merit badges.

“This isn’t a one-day in and out,” Williams said. “They’ll work on other things in the following weeks and, with any merit badge, they have the opportunity to say, ‘Maybe this is a career field I want to get into.’ It’s almost like an internship.”

Scott Dam, who works as a volunteer at the railroad museum, said it’s important to get the kids interested in trains for myriad reasons. One reason, he said, is to eventually replace the older volunteers with younger ones.

“We want to get their interest and get them involved. We need to be building the youth involvement,” Dam said. “Learning about it, studying it … the railroad merit badge is a very useful and interesting merit badge.”

The boys were quizzed on identifying a variety of rail cars, including a refrigerator car, covered hopper and a gondola. The importance of train safety also was driven home in light of the recent Amtrak incident where eight people died after a train derailed in Pennsylvania on May 12.

Scouts also interviewed those who work in the railroad business and even learned how to operate model trains.

Tyler Nichols, 12, of Troop 684 of Las Vegas and John Glenn, 11, of Troop 700 both said they enjoyed learning about the safety aspects of railroads. Both are on the verge of completing their third badge and looked forward to riding the trains they studied all afternoon.

Dam said the badge helps the Scouts gain insight into the history of trains. Learning about the evolution of trains is a critical part of earning the merit badge.

“To me, it’s just an interesting part of life,” Dam said. “We’ve got the history of our railroads and how they built the country, and then we’ve got what’s going on today. They learn how to do all sorts of operations on the railroads.”