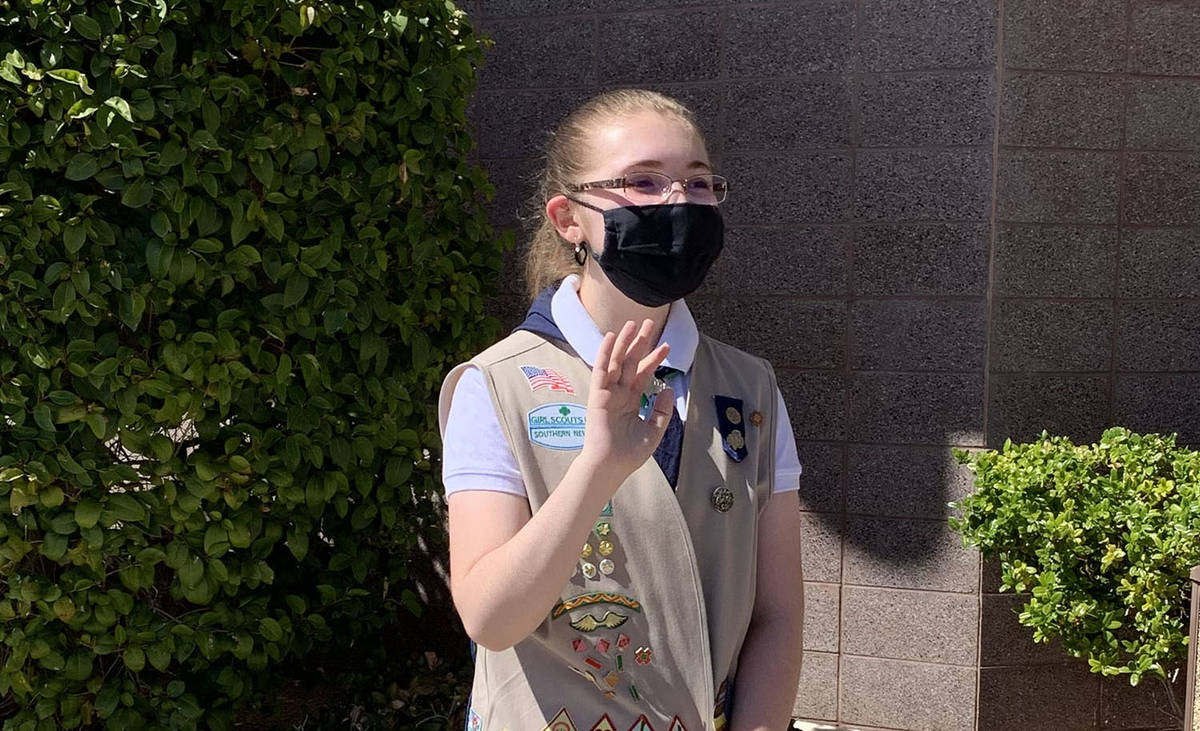 (Hali Bernstein Saylor/Boulder City Review) Abigail Panariso, 14, waves to participants of a parade to honor Vietnam veterans that she organized at the Southern Nevada State Veterans Home on Monday, March 29, as she worked toward earning her Girl Scout Gold Award. 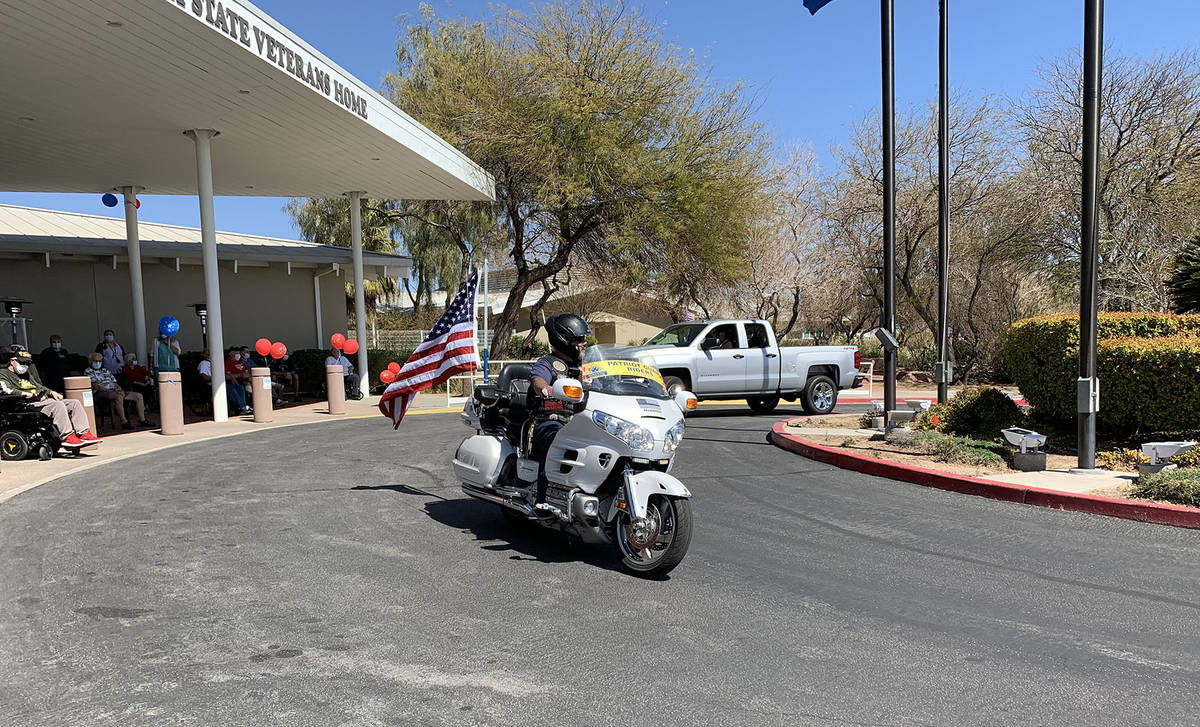 (Hali Bernstein Saylor/Boulder City Review) A motorcyclist flies an American flag as he passes in front of residents at the Southern Nevada State Veterans Home during a parade Monday, March 29, to recognize Vietnam veterans that was organized by Boulder City Girl Scout Abigail Panariso. 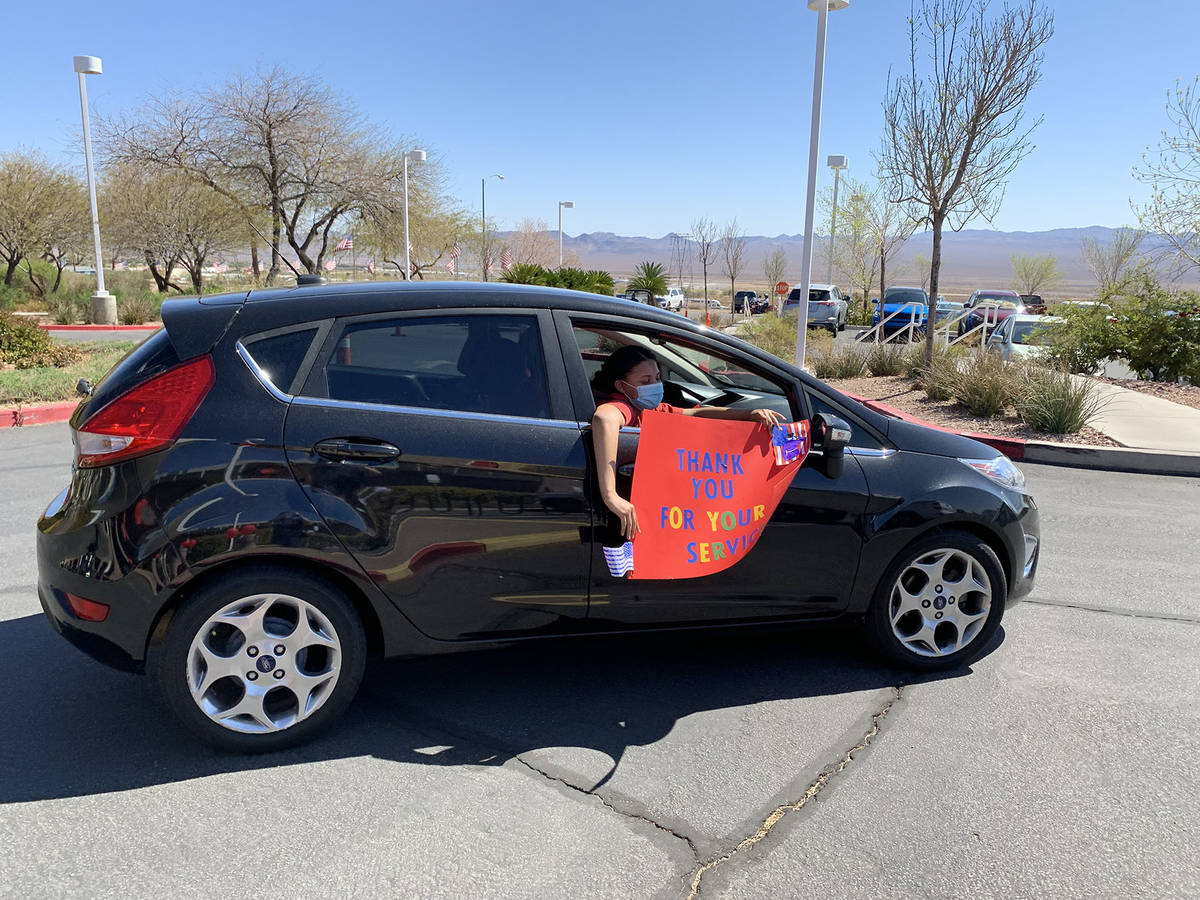 (Hali Bernstein Saylor/Boulder City Review) A participant in a parade at the Southern Nevada State Veterans Home on Monday, March 29, 2021, to recognize Vietnam veterans holds a sign thanking them for their service. 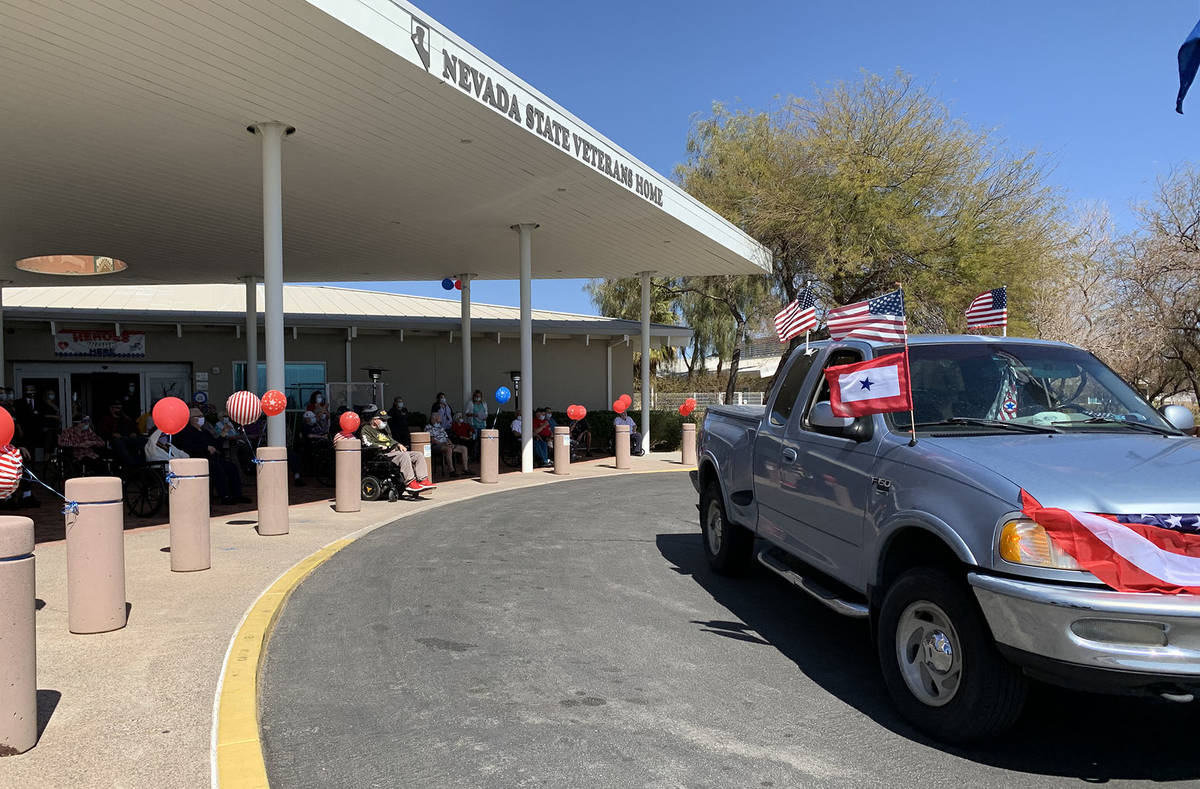 (Hali Bernstein Saylor/Boulder City Review) Residents of the Southern Nevada State Veterans Home wave and cheer on participants in a parade Monday, March 29, to recognize those who served in the Vietnam War. The parade was organized by 14-year-old Abigail Panariso of Boulder City as part of her efforts to earn a Girl Scout Gold Award.

That sentiment by 14-year-old Abigail Panariso of Boulder City fuels her actions to honor and recognize the sacrifices of the nation’s veterans. Most recently, she organized a caravan in the community to parade in front of the Southern Nevada State Veterans Home on Monday, March 29, to observe National Vietnam War Veterans Day.

“My grandpa was a Vietnam veteran,” she said. “When grandpa came home from Vietnam he was not welcomed at all. He was spat on and not treated with respect. I want all the veterans to know that we love them, respect them and I want to make them feel that they are always being thought of. I don’t want them to feel forgotten. I want them to … know that they won’t be disrespected anymore.”

Abigail said that while she knew about the lack of respect for Vietnam veterans, her late grandfather never shared his experiences with her or her family.

She also has two great-grandfathers who served in World War II.

Kristy Waggerman, volunteer coordinator for the veterans’ home, had nothing but praise for Abigail and her efforts on behalf of veterans.

Currently, about half of the facility’s residents, 59 in all, are veterans of the Vietnam War, she said.

In addition to recognizing veterans, the parade also doubled as a requirement for the longtime Girl Scout to help earn her Gold Award, the highest honor bestowed by the organization.

Among the necessary steps to earn the honor is to have 100 hours of service, create and operate an organization/plan that addresses a specific issue and assemble a team to put the plan into action.

She created Abigail CARES (Cares, Appreciation, Respect, Event and Support) for Veterans and Parades, which she said she hopes to turn into a nonprofit and continue working with after she leaves Girl Scouts.

Abigail has been a Girl Scout for 10 years, starting as a Daisy and working her way through the ranks. She plans to stay in Girls Scouts until she completes her senior year in high school.

This is not the first event to honor veterans that Abigail has organized. To earn her Silver Award for Girl Scouts, she had 500 thank you letters written by fellow students at Thurman White Academy of the Performing Arts and her church. She also partnered with Honor Flight of Southern Nevada to obtain eight all-terrain wheelchairs for the veterans to use as they toured military monuments in Washington, D.C., and arranged a special welcome home ceremony for after a trip.

Abigail is the daughter of Sarah and Jim Panariso of Boulder City. She is a ninth-grade student at Las Vegas Academy of the Arts, where she plays oboe.