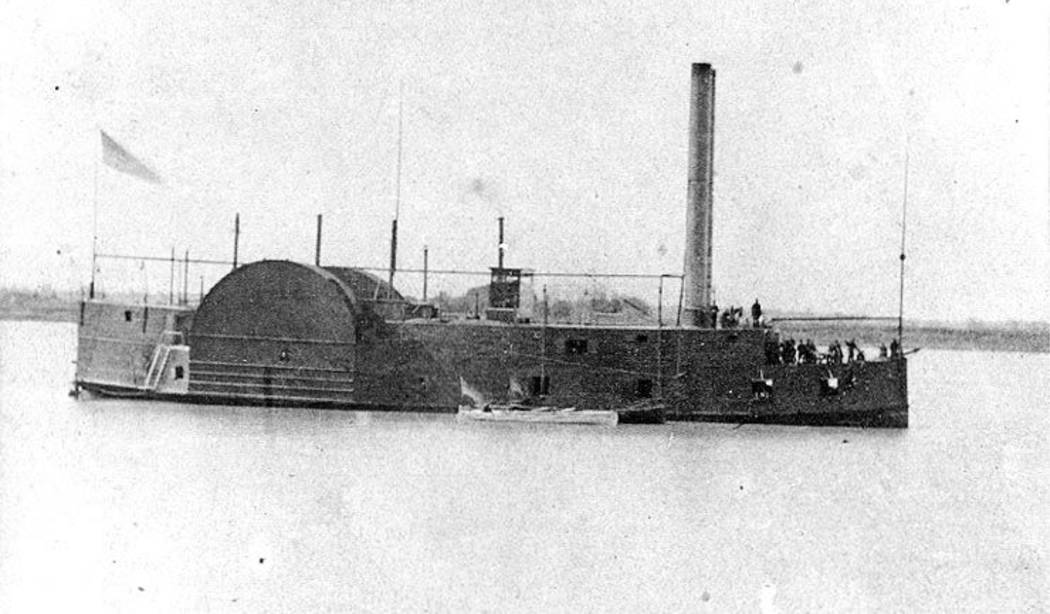 (Dave Maxwell) This pre-Civil War Union gunboat is what the Explorer might have looked like as it sailed up the Colorado River in 1858 and frightened local residents.

A case of mistaken identity caused a great deal of concern among the early Mormon settlers in the Nevada Territory in March 1858.

High political tensions between the Mormon settlers in the Southwest and the federal government at the time were of particular strain. So when Jacob Hamblin, a Mormon scout and missionary out on a hunting expedition, spotted a Yankee gunboat near the present day site of Hoover Dam on the Colorado River he was doubly concerned. He speculated this might be the forerunner of a federal troop invasion.

The strange craft did have soldiers aboard and sported a 4-pound howitzer to boot.

Rumors had been circulating among the local Indians of “Americats” on the river.

Hamblin raced back to the tiny Mormon settlement at Las Vegas and told them all to return to safety in Utah, and so the mission there was abandoned, in part for that reason along with continued troubles from the local Indians.

What Hamblin did not know was that the Yankee paddle wheeler was not an armed gunboat, but rather an expedition sent by the United States Corps of Topographical Engineers, commanded by Lt. Joseph C. Ives and the good ship Explorer. Its main function was to see how far up the Colorado was completely navigable? In other words, a purely scientific expedition.

Steamboats had been traveling up and down long sections the Colorado carrying immigrants, miners, mail and supplies for about five years, but this one was somewhat different.

The Explorer was manned by Ives, a few soldiers and crew. But the Explorer was not really a “good ship.” As one historian wrote, it was rather “a monumental piece of red tape and folly.”

Built by Ives and tested on the placid waters of the Delaware River back East, then disassembled, shipped to the Isthmus of Panama, hauled overland to the Pacific, reassembled and sailed up to the Gulf of California, to the mouth of the Colorado and on up to Fort Yuma in Arizona.

Ives and his party of scientists had numerous problems with the Explorer. It wasn’t really made to handle the rough, turbulent waters of the Colorado, was continually running aground on sand bars and rocks as well as in need of constant repairs.

Finally, after a long, exhausting journey, the expedition made its way some 550 miles above Fort Yuma to Black Canyon, site of present day Hoover Dam and a little beyond. This is when Hamblin saw the Explorer working its way up river. Ives also saw Hamblin on shore, but Hamblin then mistook what the Explorer was doing on the river. No hostile intent at all.

Soon the Explorer crashed again on the rocks, threw three men overboard, jammed the boiler and tore loose the wheelhouse. It would be three months before it could sail again.

Eventually, the Explorer was used for hauling freight and supplies for the Army. It was based out of Fort Yuma for many years.

Ives, even though New York born, joined the Confederate Army during the Civil War. He served in several engineering capacities and was finally appointed aide-de-camp with the rank of colonel to Confederate States of America President Jefferson Davis from 1863 to 1865. After the war he settled in New York City, where he died Nov. 12, 1868, at the age of 38.