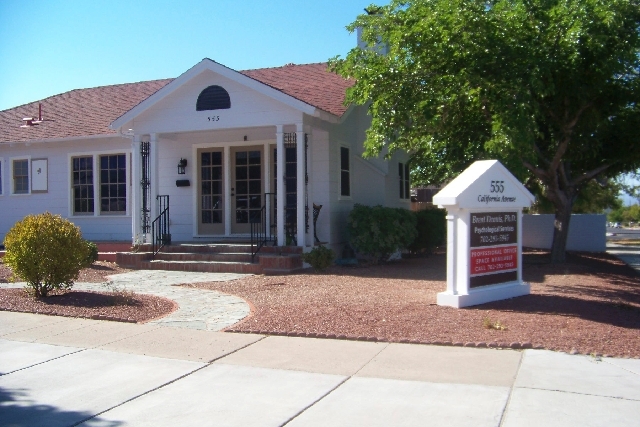 “It was time for me to commit to the community and get more involved,” he said.

Dennis came to town in 1995, when he was hired as the director of Partial Hospitalization Program at Boulder City Hospital, which continues today treating patients able to remain in the community but requiring additional professional support.

Although Dennis no longer directs the hospital’s program, he continues to work there with patients in group settings twice a week. His private patient roster consists of children, families and adults of all ages.

Dennis also practices at the Nevada State Veterans Home twice a week. He said he “loves the staff and the facility” and “working with the guys.”

His work at the home will increase shortly, which is one reason why Dennis is looking to add at least one more psychologist and possibly up to three new mental health professionals . Making house calls is also a part of Dennis’ practice as well as providing services to residents at The Homestead of Boulder City and Lakeview Terrace.

Dennis credits the success of his early private practice to the referrals from doctors in Boulder City, especially Warren Smith and Joe Hardy. They saw good results in their patients treated by Dennis and continued to make referrals.

While Dennis knows from his practice the need for mental health services is real, he also relies on hard evidence stating that some published data states as much as 40 percent of medical visits are psychological in nature.

Dennis is enjoying making this commitment to the community, a step he had been somewhat hesitant about. He thought there would be a problem or uneasiness seeing patients in the community on a personal as well as a professional basis. No such setback has occurred. Patients are eager to greet him in the grocery story or anywhere in public where their paths might cross.

So Dennis has joined the Chamber of Commerce and will host a Chamber monthly mixer in the near future. He has worked with city employees while applying for redevelopment funds to help renovate his building.

While Dennis is comfortable with his practice today, the path he took did not begin with a childhood wish to become a psychologist.

He attended the University of Tulsa on a football scholarship and majored in business. Having come from a Christian family, he was drawn to a group called the Fellowship of Christian Athletes. This led him to take a position as a youth minister in Sand Springs, Okla., and enroll in a Master’s of Divinity program after graduation from college.

The missionary portion of the divinity program took Dennis to South America and Africa, experiences that changed his life. After seeing first-hand the poverty and need in other parts of the world, Dennis questioned whether he wanted to become a minister. He knew he “still wanted to help people” but maybe it would be in a different way.

Dennis spoke to a friend who was pursuing a degree in psychology, applied to the University of Tulsa’s combined master’s and doctoral program in psychology and has “never looked back since.”

Berg said she enjoys working with Dennis because he is “truly dedicated to helping people in the mental health field.”

For those who may be hesitant about seeking mental health service, Dennis suggests they look at their life and ask, “Am I living a fulfilled, satisfying, growing, expanding, vibrant life?” If not, then it’s not working. “Open your mind to new strategies, new thoughts,” he said.