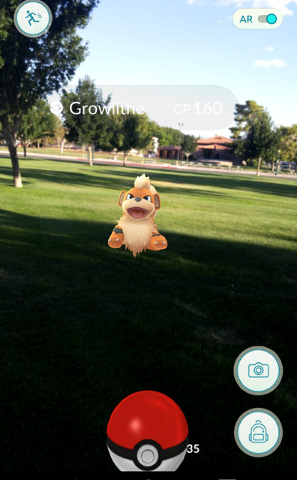 "Pokemon Go" requires players to explore the real world to find their targets, which can then be viewed and captured on their phones. Hunter Terry/Boulder City Review 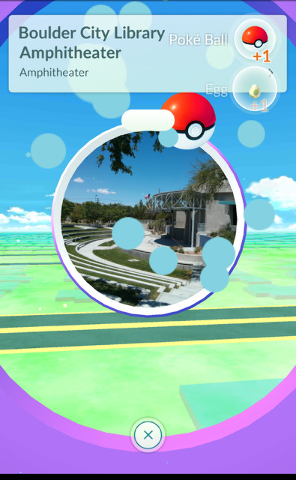 "Pokemon Go" is the most popular mobile game in the world at the moment and the GPS-based adventure requires players to go out in search of physical landmarks in the real world, such as the amphitheater at the Boulder City Library, in order to play the game. Hunter Terry/Boulder City Review

Pokemon Go was released in the United States on July 6, and in the ensuing two weeks it has blown away expectations on its way to becoming the most downloaded game in the world and doubling Nintendos stock price.

The original Pokemon video game was released in 1996 on the first mobile gaming device, the Game Boy, albeit without a wireless connection. Just like todays version, that game was a pop culture phenomenon that captured the minds of children around the world, taking them on a quest to explore the digital world in search of battle-ready pocket monsters.

Two decades later, those children have reached adulthood and the game has grown with them, evolving into a GPS-based quest that requires users to explore their own communities and beyond.

Map markers are placed at various locations, frequently around parks, public art and businesses or landmarks, and players, referred to as Pokemon trainers, must get within a few yards of that site to accomplish actions in the game. The most common markers are called Pokestops, where trainers can acquire game-play items, and then there are gyms, where players can put their Pokemon up against other trainers in a duel for experience points and prestige.

Boulder Citys downtown is packed with public art and parks, making it a busy hub of Pokemon activity and, according to local trainers Sharan Ann Gladden and Justin Summerfield, the perfect place to get some fresh air and rack up points, even if the game is still ironing out some hiccups.

I loved the game in middle school, so its been fun to relive some of that excitement, Gladden said. My favorite thing about it is how its getting people out of the house and connecting with a shared activity.

Nostalgia is definitely the biggest part; I brought my kid out the first day we played but he wasnt as impressed and it is kind of glitchy, Summerfield said. But giving people a reason to go and play outside is a real cool concept. There are plenty of games you can play on your couch.

The idea of this augmented reality video game having health benefits, not to mention social benefits, seems to be backed up by data as well as anecdotes. Forbes.com recently surveyed over 66,000 readers and while nearly a third admitted to playing at work, half said they had bonded with co-workers and clients over the app. A full 80 percent of those surveyed said that the app caused them to exercise more and a third said they were exercising a lot more.

However, it is not just children and nostalgic adults that have taken notice of the game. Businesses are trying to capitalize on its ability to draw crowds.

Pokemon-attracting lure modules are being used by many stores and bars to bring customers in range, but many are not yet sure how much the app is doing for business.

We had some lures out for a few days and they definitely attracted people, but most just wandered around, played the game and then left, said Jaquie Wolowicz of The Dillinger Food and Drinkery. A lot of them didnt appear old enough to hang out in the bar anyway.

The Boulder City Library jumped on the opportunity to become involved and has integrated the app into its schedule of youth events such as the anime club and its recent video game panel.

There have been a lot of people asking questions and its certainly increased the amount of tweens and teens walking around the library, said Samantha Evangelho, the librarys technology specialist. Weve been busy and well keep dropping lures, and were even planning a Pokemon movie night, but its hard to say at this point if people are using services because of it.

5
Guest commentary: Feeling good or being wise? Vote no on pool proposals