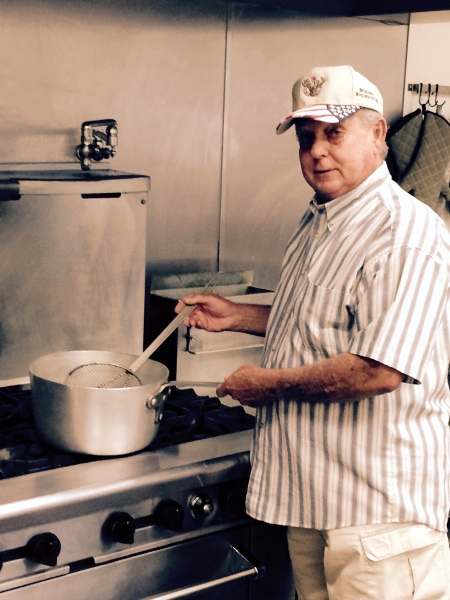 How do you teach an Elk to fish? It’s easy once he learns how to hold his pole. That is according to Rich Phegley, an officer with Boulder City Elks Lodge No. 1682.

“It is one of the oldest lodges in the state,” Phegley said.

When it comes to fish, he has created quite a reputation for himself as an angler and a chef, according the man who says “I would rather spend time with fish than with people.”

On a recent afternoon in the kitchen at the Elks Lodge, Phegley related stories of his childhood in Missouri and how he began working the farm with his family at an early age. “We all worked together and then we fished the ponds on the farms. Of course, I gave away most of what I caught.”

Phegley was a natural fit for the Elks. He “grew up helping others — it’s just what you did.” The international philanthropic organization is based on service to the community and the local chapter is no different. Elks provide more than 250 baskets of food to needy families for Thanksgiving. They invite veterans from the Nevada State Veterans Home in Boulder City for dinner, provide holiday gifts for them and provide more than $10,000 per year for scholarships in Boulder City.

A considerable portion of those funds are raised by the food events put on by the Elks.

“Each officer of the lodge is responsible for a particular month; I only do fish,” Phegley said.

The lodge members enjoy Friday night dinners, Thursday night tacos and other meals throughout the month.

Phegley started out making fish tacos and became so involved that he is the go-to person when it comes to providing fish.

“Bait to plate is my feeling when it comes to fish. I get up well before dawn and am on the lake two or three days a week. I catch about 50 pounds of fish and after cleaning I end up with 20-30 pounds of filets. I use a Louisiana breading mix and a few other spices and the people just seem to enjoy it.” Phegley said.

Phegley is often involved in the special fundraising events the lodge provides. One of his favorites is a story about “a lady whose husband passed away, her mother was sick and then a few days later her dog was eaten by coyotes. We did an event for her to help raise some funds to help her out, she was very grateful. Unfortunately, she recently passed, also.”

Growing up on 340 acres of farmland in the Midwest taught Phegley to survive and be resourceful, skills he said have served him well for 42 years as a crew chief for Trans World Airlines and American Airlines.

“One of the perks was being able to travel a lot, so my wife and I have been a lot of places,” Phegley said.

He and his wife of 29 years, Margie, moved to Boulder City in 1972 and settled here to raise a family.

Phegley joined the Elks in 2000 and has been instrumental in carrying on fundraising programs since.

The Elks support a closet at the local high school where kids can go to receive free supplies or clothing if they need it and they provide flags for newly naturalized citizens each month. They join the parades and fundraising events for those less fortunate and find creative ways to fund them.

The Elks recently started a charity raffle in Boulder City and will soon be licensed to hold charity bingo events.

Phegley said he doesn’t see himself slowing down anytime soon and said, “I joined the Elks because they are a caring organization that wants to give back to the community and that’s what I like to do.”

So if you don’t feel like cooking on a Thursday night, cruise on down to the Elks Lodge at 1217 Nevada Highway and have a few fish tacos. Phegley can tell you where the fish were caught and how much they weighed because he believes in “bait to plate.”

Cut fish into 1-inch cubes. Saute garlic in butter and 5 teaspoons of lime juice for 30 seconds. Add fish and pepper. Cook for 6-8 minutes over medium heat until the fish flakes.

Place a spoonful of fish on each tortilla, and top with lettuce, tomato and sour cream sauce.

Pour 2 inches of 7UP in a large saute pan. Bring to a boil, then reduce heat to a simmer.

Drop in a handful of bite-size pieces of the fish filets into the 7UP. When they float to the top, remove immediately.

Dip in your favorite garlic sauce of lemon butter.

The sweetness of the 7UP along with the mild taste of the fish makes it taste like lobster.

Wash and pat dry your potatoes. Roll them in olive oil. Drain the potatoes than cover them with sea salt.

Bake the potatoes at 450 degrees for 1 hour. Rinse with warm water to remove the salt.

The salt draws the moisture out of the potato and leaves it soft and fluffy inside; it’s like eating a cloud.