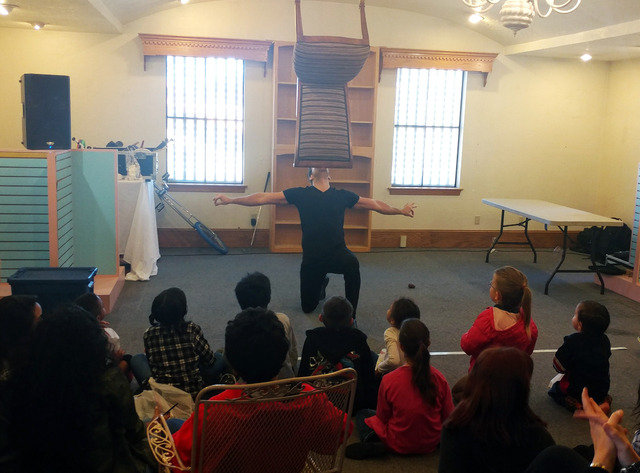 Hunter Terry/Boulder City Review Strip performer Jeff Civillico performed for the kids at the St. Jude's Ranch for Children on Saturday, balancing a variety of objects, including a chair, on his chin. 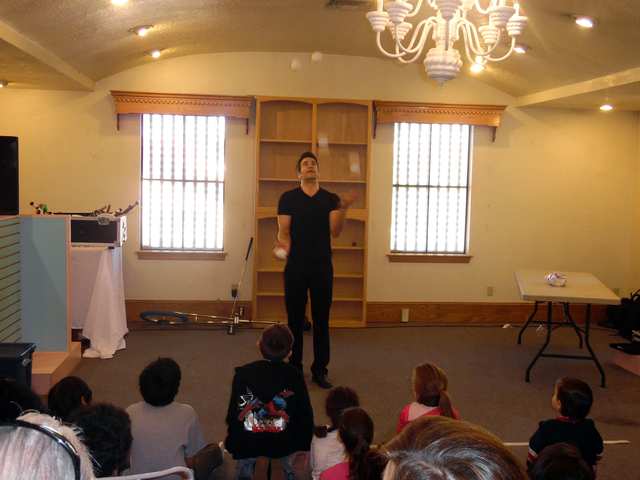 The kids at St. Jude’s Ranch for Children were treated to a private show Saturday when Jeff Civillico took a break from headlining at the Flamingo to perform his signature blend of comedy and juggling inside the ranch’s old gift shop.

Civillico kept the children engaged with physical comedy, off-the-cuff jokes and audience participation, and he wowed them by balancing objects, including a chair and a table, on his chin. For the main attraction he juggled a variety of props, from bags, bowling pins and bowling balls to oversized knives, at one point even doing so atop a unicycle.

The kids at the ranch have been through some tough times in their young lives and the performance made for a joyful day they won’t soon forget, according to St. Jude’s Executive Director Myesha Wilson.

“We are so thankful to Jeff and his team,” Wilson said. “Our children were mesmerized by his juggling and they couldn’t stop laughing during his show. They were thoroughly entertained; (it was) something they will remember forever!”

The performance kicked off a new monthly program at St. Jude’s with Civillico’s nonprofit group Win-Win Entertainment. The third Saturday of each month will now see a different family-friendly Las Vegas Strip entertainer donate his or her time to perform a free show for the children and staff at the ranch.

February’s entertainer will be magician John Rotellini, and in the following months the children will be treated to performances that include storytellers, singers, dancers and puppeteers.

Civillico founded Win-Win Entertainment shortly after moving to Las Vegas in 2010 and filed as a 501 (c)(3) in 2012, but said charity work was something he had begun long before that.

“I started juggling professionally when I was 15 and the first show I ever did publicly was a charity show for a special needs school,” Civillico said. “I did a lot of charity shows when I lived in Orlando and I kept doing them when I arrived here. I love getting out in the community, I love giving back.”

Before long Civillico said he had developed a reputation and would frequently get call from charities seeking help lining up free entertainment for events as well as from performers looking for gigs or a way to give back. He had two groups of people who really needed to be put together and from there it just grew.

“We’ve always had a relationship with St. Jude’s but we never had a program with them, so I wanted to establish something ongoing,” Civillico said. “It just dawned on me that it would be a perfect thing to do. We are thrilled to be able to do this for the kids and we already have a whole bunch of performers who are excited to participate.”