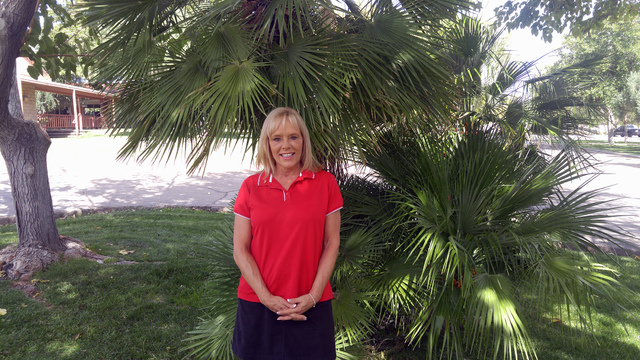 Hunter Terry/Boulder City Review Marcie Gibson has been volunteering in Boulder City for nearly 20 years, focusing much of her time on city's youth and work for the American Cancer Society, while remaining a fixture in many of the town's most prominent community events.

Boulder City is home to an abundance of family-friendly events, most of which survive on the generosity of volunteers, and few people in town embody that spirit of community involvement like Marcie Gibson.

It was while working at Ace Hardware in the early 1990s that she first became exposed to all of the events held in the downtown area, from the Damboree to Art in the Park and all of the Christmas activities, and, according to Gibson, early on she knew she wanted to get involved.

“In 1998 the Chamber of Commerce sent out an email blast asking member businesses to lend a hand, and so I signed us up,” Gibson said. “My first time volunteering was to help with Spring Jam, and it was so much fun I was hooked.”

When Gibson first began volunteering for the chamber she had the opportunity to work with Goldie Begley, who not only served as the chamber’s president but also became a mentor for Gibson.

“She did absolutely everything in the community; she helped me become a better person, and she encouraged me to learn about the chamber and about Rotary,” Gibson said. “She gave back everything she had to the community, and she was my inspiration until the day she passed away.”

Since those early experiences, Gibson has been a mainstay at local events and has donated her time to some of the most prominent nonprofit organizations in the city, including the Rotary Club of Boulder City, Boulder City Sunrise Rotary, the Boulder City Chamber of Commerce, Relay for Life and the Boulder City Hospital Foundation.

Although she loves volunteering at community events and helping whomever she can, it is in her work with the youth of Boulder City that she takes the most pride.

“I’ve been the youth chair for the Sunrise Rotary for a few years, and we have the leadership camps for eighth- and 11th- graders, as well as the speech contest and the George Hensel Ethics Essay contest,” Gibson said. “The programs are just wonderful. They change the kids so much and inspire them for their future; that is my passion.”

Gibson moved on from Ace Hardware in 2008 and now works as fitness center manager for the Boulder City Parks and Recreations Department and also teaches seniors isometrics exercise classes.

Despite some life changes, one constant over the past 15 years has been her work with children in the community, and her labor has been an invaluable asset to the city, according to Roger Hall, who works with her as the director of the Parks and Recreation Department as well as in his capacity as director of marketing for the Sunrise Rotary.

“The kids are our future, and Marcie knows that,” Hall said. “She has quite a following, and she has produced some great kids who’ve had real success in school and securing scholarships. A lot of the success of those programs can be attributed to Marcie and her efforts.”

In addition to her work with children and the community events, Gibson has been at forefront of the American Cancer Society’s work in the city.

In 2007 the Relay for Life had been floundering in Boulder City and even disappeared for a few years. The society, looking to get it going again, reached out to the Chamber of Commerce’s CEO Jill Lagan, and she in turn pointed them in Gibson’s direction.

Cancer is one of the leading causes of death around the world, and many people have had their lives touched by the pain it brings. For Gibson, that curse hit home when her mother died from complications tied to cancer in 2001, and her aunt followed just a few years later.

She jumped at the chance to get involved, and in 2008 the Relay for life returned with Gibson serving as the chairperson, a capacity she continued in through 2010 before stepping into the role of logistics chair, which she still maintains.

“Marcie is an incredibly caring and passionate person in the fight against cancer,” said Shannon Moore, the Great West Division of the American Cancer Society’s community manager for the Relay for Life. “Her dedication is just inspiring and a major reason that the relay has survived in Boulder City for so many years.”

Since that first experience with the society, Gibson has become more involved in the fight against cancer and, according to Moore, over the past 10 years she has become an irreplaceable asset.

“Not only does she help run the relay year after year, she also runs the cancer closet in Boulder City, so she is the resource for anyone who needs wigs, scarfs or any kind of assistance,” Moore said. “She works with the hospital foundation, sets up pantries and helps patients get what they need without having to find a ride all the way to Las Vegas.”

Gibson moved to Boulder City in 1990 to be near her family after spending most of her life in Lake Arrowhead, California. Over the previous 15 years, much of her family had relocated here to get out of the snow, and soon after relocating she knew she had found the perfect place to raise her children, Alissa Cisco and Hayley Gibson, who has since been joined by Brett Harris Haggerty.

Though she does look forward to retirement and traveling with her husband, Roger Harris, she said she doesn’t see herself moving away or pulling back from her volunteer work. She said she just “loves it all too much.”

“I love the town, I love the weather, and I love the schools; I’m so happy we came here,” Gibson said. “I love the small-town atmosphere, the way that people know each other, care about each other and take care of each other. I’m constantly thrilled and grateful to be a part of it.”