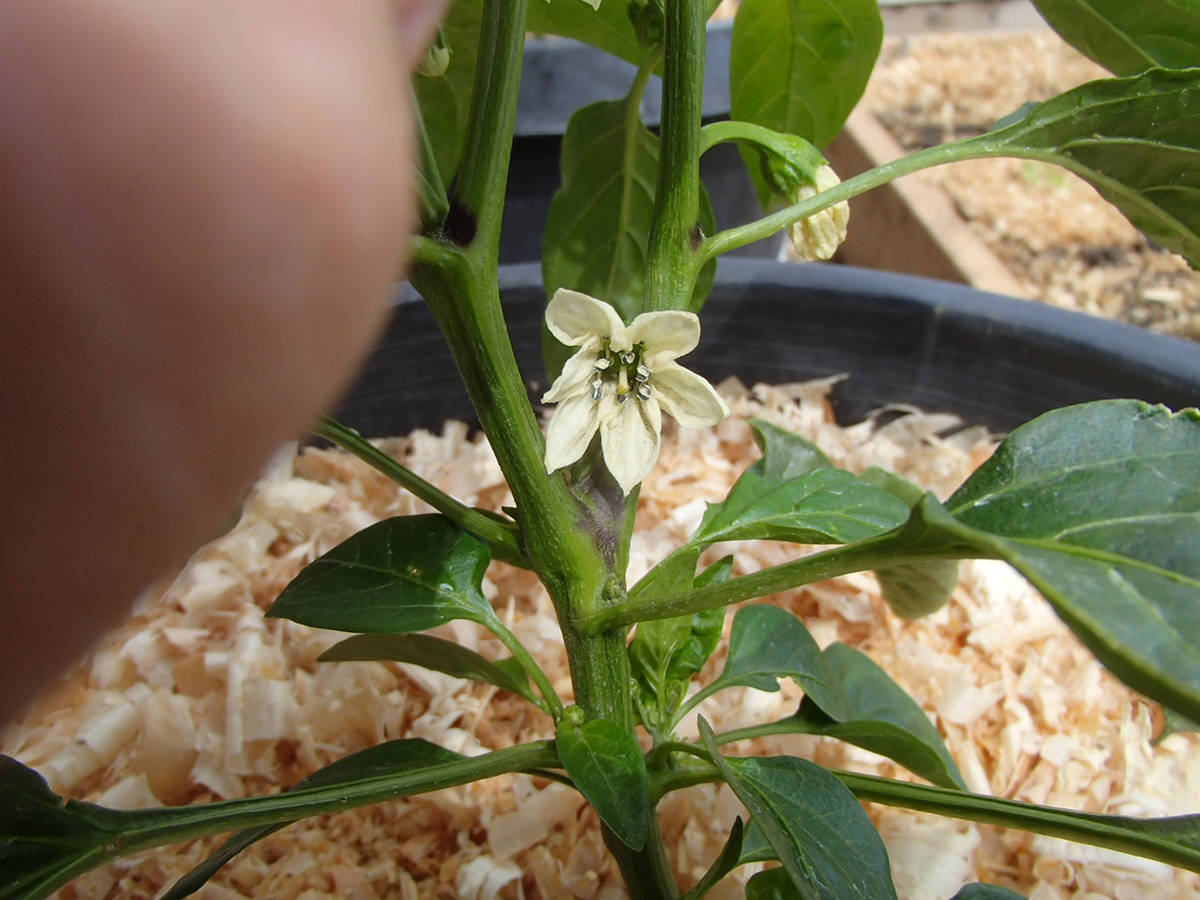 (Bob Morris) Depending on the variety, removing early flowers from a pepper plant will allow it to focus its energy on overall growth. 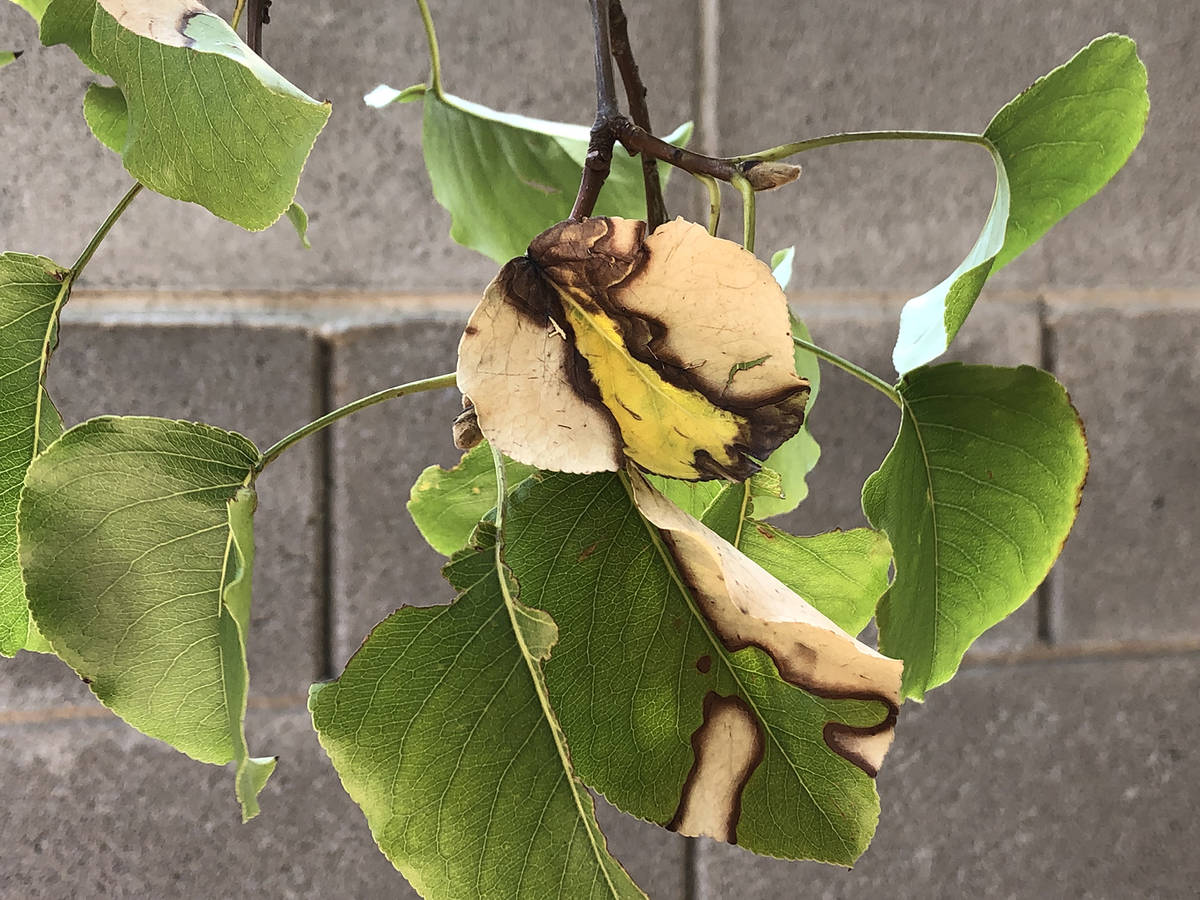 (Bob Morris) The leaves on this fruitless pear tree were probably damaged from drought and heat. 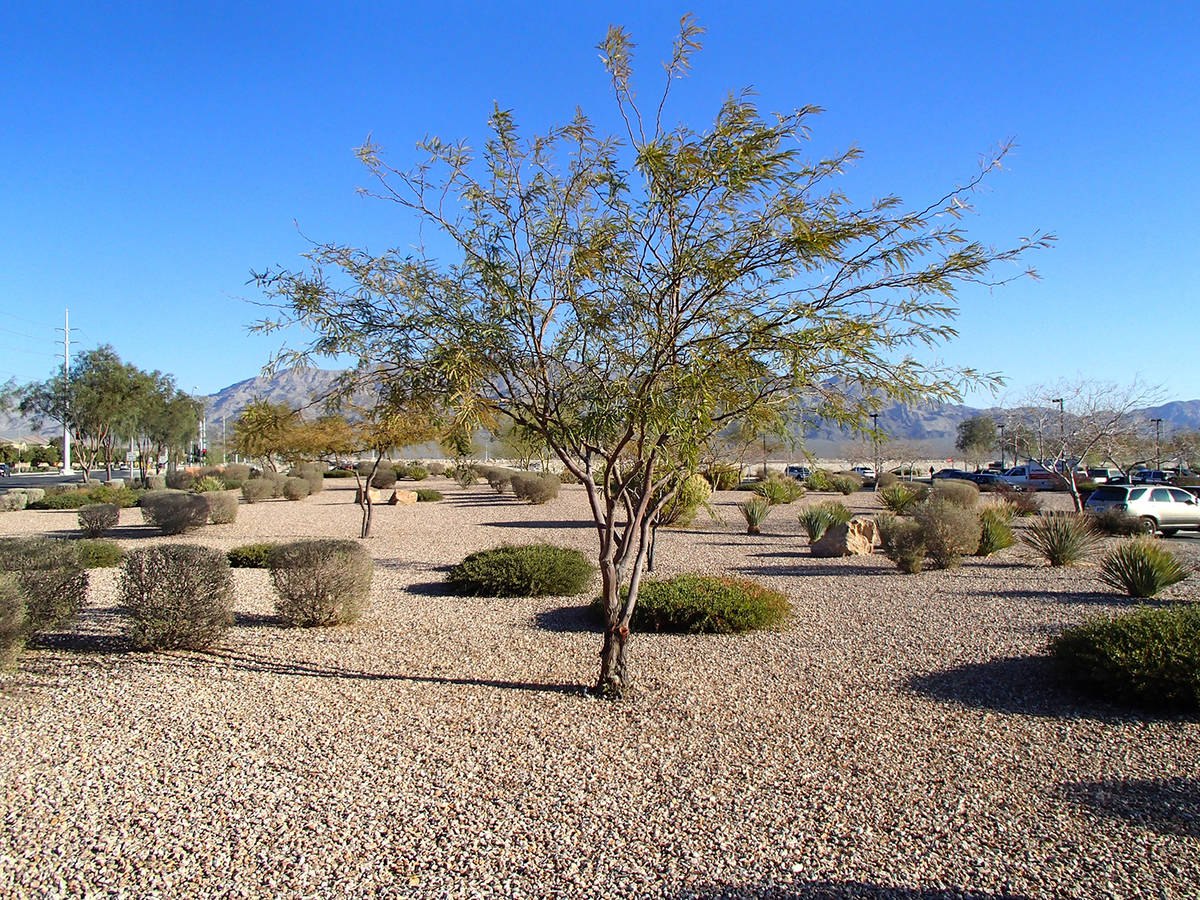 (Bob Morris) This is a young mesquite tree. It should start to produce pods when it is between 6 to 8 years old.

Q. I am growing peppers from seed and the plants are starting to flower when they are very small. Can I remove the flowers and let them get larger and then let them flower?

Pepper plant size depends on the variety. The recent trend in vegetable transplant hybridizing for home gardens is for closer spacing and early production. This accommodates production for small backyard gardens and raised beds, which are becoming quite common.

Hybrid varieties like Carnival, marketed by Burpee, is a combination of varieties that flower early because they are small, growing about 12 inches high, and so their spacing should be about 12 inches apart. Gypsy hybrid is a bit taller and early flowering as well. The plants are spaced about 18 inches apart and will grow to about 18 inches tall. It was hybridized by Peto Seed and marketed by Burpee. Gold Standard, also a sweet pepper hybrid marketed by Burpee, is the tallest at 2 feet and spaced about 2 feet apart. Their fruits will take the longest to mature but also produce the largest fruit in that group.

You can remove the flowers, but they may try to flower again and may or may not grow taller because of the variety.

Q. I am in England and, having read your article on pomegranate pruning on your blog, I would love some advice. I have had a little go on my potted pomegranate tree going on my patio but worried about going further. What would you do in addition to what I’ve already done?

A. I am not sure you have much light in that location on your patio. Fruit trees need about eight hours of full sunlight to be fully productive. As the amount of light decreases they produce fewer fruit. At some point the level of light can be so low that they will stop producing even flowers.

The leaves of the trees are responsible for gathering available light. Fewer leaves means less light is gathered. Leaves shaded by other leaves and stems also means less light is usable. I like to think of plants as solar collectors. Leave as many leaves as possible but try to make sure they are in full sun as much as possible.

With that in mind, let’s talk about pruning. I like it that the suckers are removed from your pomegranate tree. This removes potential shading of leaves by leaves growing above it. But did you remove too much? It looks like you have removed all the suckers from major limbs to a height of about 4 feet. I would let suckers develop along these major limbs to just above your knees. This allows the tree to gather more light. Remove one of the side shoots when they are too close together, remove branches shading another side shoot beneath it, and make sure that the flowering shoots are at least 6 inches apart and coming from the trunk like spokes from a wheel.

See if pruning the stems and leaves so it resembles a solar collector improves flowering and fruit set. If it doesn’t, there might not be enough light on your patio. Training your pomegranate tree to have only a few large limbs, as you have done, will produce larger but fewer fruit.

Q. I am very tired of picking up mesquite beans. Do you have a spray that could eliminate them?

A. I may have something that can help. It’s used to prevent fruiting on some trees like olive, ornamental pear and plum. It is made to do exactly as you wanted. The active ingredient is either Naphthaleneacetic Acid (NA for short and easier to remember) or Ethephon. They are marketed under a bunch of different names like Olive Stop, Florel and Ethephon.

I am required by law to only recommend these sprays for trees mentioned on the label. Application to trees other than what is listed on the label is illegal. Your mesquite tree may fall under the category of “ornamental trees” so the precise rate of application may be unknown and the label may give you a concentration range to use. I would start in the middle of this range and see if you like the results. The label will tell you how much to apply and when.

Most of these types of chemicals require two spray applications when the tree is flowering so that the flowering period is covered as much is possible. Because the flowers must be open at the time of spraying, they recommend two sprays. One spray applied at full bloom will drop most of the fruit when it’s small. Both of these sprays have little impact, if any, on problems regarding pollen release.

Q. We have a fruitless pear tree that is about 6 or 7 years old. Many of the leaves have started to turn yellow, then white and fall off. Sometimes only part of the leaf will turn white, almost as if it is sunburned. Do you have any suggestions on how to help it?

A. Fruitless pear can also be called ornamental pear or Callery pear. What you are seeing is not iron but drought, poor water uptake by the plant or not enough water. You’re seeing a heat stress issue. It is either surrounded by rock, watered daily or not watered enough. These trees do well in full sun if they are surrounded by lots of other plants or planted near a lawn. If surrounded by rock, then rake the rock back about 6 feet in diameter from the trunk this fall. Cover the exposed soil with wood chips instead of rock. Plant smaller shrubs nearby so that it can grow its roots further from the trunk and use this water.

As plants get bigger, they need more water. At 6 to 7 years old it should be about 10 feet tall by now. If that is its size, then it needs 25-30 gallons of water three times a week. More as it gets bigger. As it gets larger simply add more emitters and put them in places further from the trunk.

This water should wet the soil wet to a depth of 18-24 inches deep each time it’s applied. At 10 feet tall I would want the soil under the tree wetted to 6-8 feet in diameter. Planting shrubs near the tree will cause the tree roots to grow even further from the trunk. That’s a good thing.

Stay away from daily watering. It will not work well for trees and shrubs in the long term. Watering every day forces tree and large shrubs to develop shallow roots.

Q. I have a cold tolerant fig tree growing in Pennsylvania for the past four years. It tolerates winter temperatures to -10 F. I fear I may not have trimmed it correctly and am left with quite a substantial mess. Now the new growth comes in kind of wonky and not as much fruit has produced. How do I fix this?

A. Among the most cold-hardy of figs, supposedly, are the varieties Chicago and Celeste. Most other figs will withstand winter temperatures to about 15 F to 20 F.

It’s best to understand how and where they produce fruit and then pruning is easy. I might add, in our desert climate they must receive enough water to produce fat juicy fruit. In Pennsylvania that’s not much of a problem because of the rain. But freezing can be a problem if you want two crops. Even if the tree freezes to the ground, you should still get a single crop of figs from the new growth.

Figs potentially can produce two crops of fruit: the early crop and the main crop. The early crop of figs, called the Breba crop, is produced only on growth that occurred last year. If trees are left to get taller and taller, and they do not freeze to the ground, then the early fruit is produced further from the ground each year. The second crop is produced only on the wood produced the same year as the fig. This second crop, the main crop, begins later but it is the only crop produced if the tree freezes to the ground every year.

You can’t go wrong any way you prune fig. I would prune it to the ground each year and just get one crop from it.