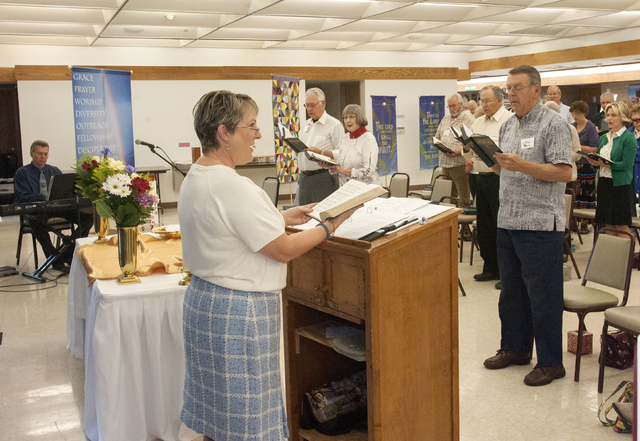 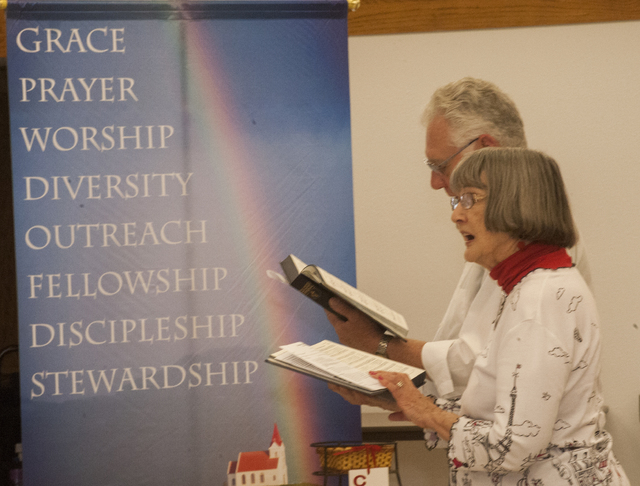 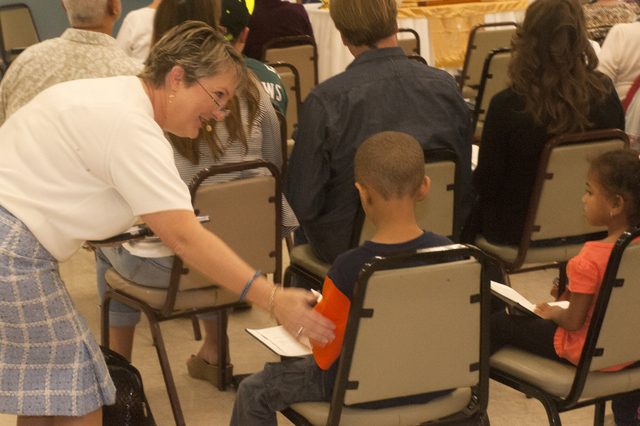 No matter what you choose to call God or how you choose to worship, the ability to practice — or not practice — a religion is such a fundamental human right that it has been included in countless documents.

The First Amendment of the U.S. Constitution guarantees freedom of religion.

Freedom of religion was also one of four freedoms sought by the Allied forces during World War II.

At the war’s conclusion, the United Nations said “Everyone has the right to freedom of thought, conscience and religion …” in Article 18 of its Universal Declaration of Human Rights.

Now, members of Boulder City United Methodist Fellowship are taking that fundamental principle a step further. They have joined the Reconciling Ministries Network that believes that people have a right to worship without prejudice, especially in terms of sexual or gender orientation.

“We are standing up to say we support this,” said the Rev. Sandy Johnson, the church’s religious leader.

It also incorporated a rainbow — a symbol of gay pride since the late 1970s — into its banner.

Johnson said a few congregants left when the rainbow was added, but the majority of the church’s members felt it was important to let others know they would be welcome and had found “a safe place to get in touch with God.”

It is one of only three Reconciling churches and communities in the state and one of 675 in the nation, according to the Reconciling Ministries Network. In addition to the Boulder City fellowship, the John Rousseau memorial Sunday School Class from University United Methodist Church (a Sunday school class and church) in Las Vegas and Reno First United Methodist Church in Reno have joined the network.

Additionally, there are two other Nevada churches that are considering the prospect of voting to join the network.

Despite the growing movement, the Methodist church’s discipline, or book of rules, still states that homosexuality is not acceptable, and its ordained ministers are now allowed to perform same-sex marriages, said M. Barclay, director of communications for the Reconciling Ministries Network.

“Churches that recognize themselves as Reconciling, that we do not support that point of view, welcome everyone and believe that everyone adds to the community,” he said. “We are embracing all regardless of what the denomination might say and its policies.”

Terry McClain, a member who was instrumental in bringing awareness of the Reconciling Ministries Network to the Boulder City fellowship, said the church’s book of discipline is not compatible with Christian teachings and beliefs that all people are of sacred worth and should be included in the faith.

“Reconciling Ministries is an organization of mainstream Methodist churches who collectively are saying ‘We don’t agree with the book of disciplines. We want change and will proactively work to make changes,’ “ McClain said.

The goal of the network is to get local churches to publicly state their dislike of the clauses in the book of discipline and petition the church to make changes, he said.

During the Desert Southwest region’s annual conference June 18 through Sunday, participants voted to recommend a change to the “exclusionary language” in the discipline as well as allow for gay clergy and same-gender weddings.

Johnson said many conferences are preparing and voting on recommendations, or resolutions, to come before the next General Conference, which is set for next year in Portland, Ore. The international gathering, which is held every four years, “has come up many times in previous years and we continue to be hopeful that the support will continue to grow.”

Although the official position of the Boulder City church is fairly recent, Johnson said the willingness of the church’s members to welcome anyone into their “family” was one of the reasons she applied to become its pastor about three years ago.

Johnson said the congregation is growing and many are attracted to its welcoming spirit.

“People are coming in saying ‘I want to be part of a church that welcomes everybody,’” she said. “Being a reconciling church demonstrates to our community and our denomination at large that we are working for equality for all people.”

“There are no barriers. They don’t care about your race, economic status or previous faith,” said McClain. “Just come and be part of our fellowship and family.”

That welcoming spirit is what attracted Valerie and Joanna Chapman to the congregation. The two women, who have been together about 12 years and “married” since July 7, 2007, (legally since July 12, 2013) said the church’s ad that stated it had “open minds and open hearts” signaled that it might be the place they needed to feel connected to God and worship.

On their first visit, when Joanna introduce Valerie as her wife, there was nothing other than a friendly welcome and they were given name tags.

“We love it,” Valerie said. “It’s so nice to be able to hold hands and not be kicked out.”

Not all churches are as accepting, she added.

According to Barclay, although there is no “punishment” for becoming reconciling, pastors that conduct same-sex marriages could be defrocked and not allowed to preach as part of the United Methodist Church. How much trouble or what type of reprimand, depends greatly on the opinions of the regional officials, he said.

“You have to remember, we are not a huge congregation. Yet this process was actually voted on not just by the church board, it was the congregation itself. … It passed unanimously. That tells you a lot,” Valerie Chapman said.

“Reconciling Ministries is just another thing to be inclusive,” McClain said. “It’s not a hard-nosed campaign or secretive meetings. We are the same congregation as before we did all this. It’s just a way to tell the church, a way to publicize who we are and take action to ensure acceptance of diversity.”

McClain, 70, has been Methodist his entire life. He grew up in a small southern Arkansas community about the size of Boulder City, but said he was fortunate enough to find a congregation that was “highly liberal and accepting.”

Although he admits there were some people who took the scriptures verbatim and were unaccepting of his homosexuality, there were more who were accepting.

As he became an adult, he said he was always able to find a Methodist church within an hour’s drive of his home that had a similar viewpoint.

His life partner, Gary Webb, who died in 2007, wasn’t as fortunate.

According to McClain, Webb’s religious background was “typical Southern Baptist.” “They were ultraconservative and homosexuality was a real no-no.”

He was, however, an accomplished pianist, and performed in churches every Sunday while his personal life remained a taboo subject.

It wasn’t until they moved to Boulder City in 2007 from Houston that McClain said he was able to persuade Webb to give his denomination a try.

From the second they walked into the church, they were welcomed, he said.

“Boulder City shocked the hell out of me. They were so warm, so friendly that we left that first Sunday with 10 invitations for dinner. I was overwhelmed.”

“It’s not about me, not about the great big Methodist church in the sky or across the world. It’s about the heart of this local congregation,” McClain said.

That heart, he said, is big.

For example, during the last six months of Webb’s life there was always a church member nearby to make sure they had everything the needed, giving McClain the opportunity to continue working.

“I didn’t make a piece of toast for six months,” he said about how thoroughly they were cared for.

“I’m not a favorite child. I’m just a member of the congregation. If they see any member who needs anything, — without being obtrusive — they are there to help,” he added.

That giving spirit also is what keeps the Chapmans involved.

Valerie said she appreciates the church’s outreach programs for the elderly and youth.

“If you need help, we will help — no questions asked.”