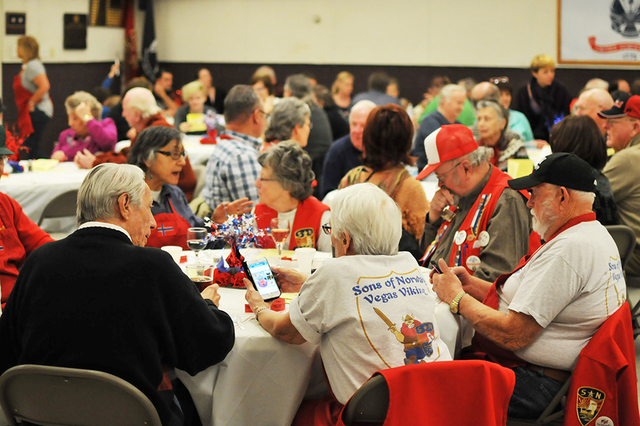 Brian Sandford/View An attendee's Sons of Norway Vegas Viking T-shirt is seen in the foreground during the early lutefisk dinner Jan. 28 at Boulder City Elks Lodge. 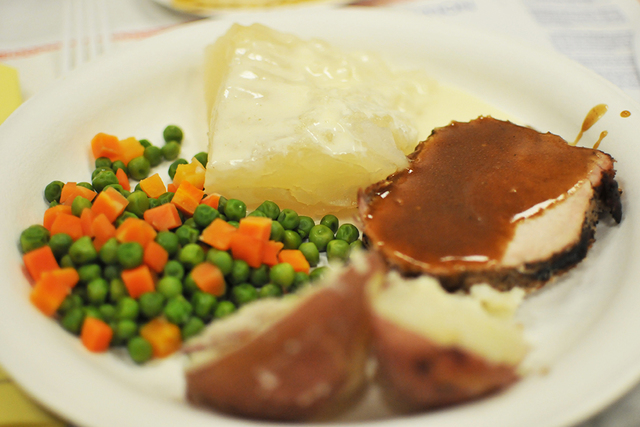 Brian Sandford/View Lutefisk, at the rear of the plate, was served with roasted pork, boiled potatoes and peas and carrots during the Vegas Viking's lutefisk dinner Saturday at Boulder City Elks Lodge.

How do you get a Scandinavian-American to talk for an hour?

Ask him what part of Minnesota he’s from.

That wasn’t one of the self-effacing jokes that flowed freely at the 19th annual Vegas Viking Sons of Norway lutefisk dinner Jan. 28 at the Boulder City Elks Lodge, but it easily could have been. Fliers at each of the 20 tables featured humorous Norse tales, and event emcee Erik Pappa, who serves in a higher-profile role as Clark County’s public information director, cracked wise as he worked the room, microphone in hand.

Indeed, seemingly all 150 attendees at the 3 p.m. dinner had connections to Minnesota or North Dakota, both magnets for Scandinavian migration. But the star of the show was the namesake gelatinous cod, and for some, it is the culinary equivalent of jumping in a frigid lake on New Year’s Day: They endure it for camaraderie and bragging rights.

Others genuinely enjoy the northern Scandinavian “treat,” which is soaked in cold water and lye (yes, the poison used for cleaning) as part of the preparation process, then is reheated and served. It was served alongside roasted pork, boiled potatoes, peas and carrots, lefse (Norwegian flatbread) and cookies as part of a Sons of Norway fundraiser that helps pay for scholarships.

Warren Halvorson and his wife, Elaine, of Las Vegas said the lutefisk dinner was their ninth in Southern Nevada and was a Christmas Eve tradition for many years. Both grew up — where else — in Minnesota, across the border from Fargo, North Dakota, and moved to the Las Vegas Valley in 2004 after spending time in California and Colorado. They have been married 65 years and left the Upper Midwest in 1950.

So why make it the centerpiece of a bonding ritual?

It’s a chance to spend time around others of Scandinavian descent, said Elaine, 85. She and her husband described their Nordic brethren as warm and friendly.

“They’re a very proud bunch of people,” Warren said. “They’re patient and quiet. All Scandinavians have the same temperament.”

The Halvorsons, like most people at the dinner, have Norwegian roots. When Pappa asked people to raise their hands indicating their lineage, only a few indicated they are Danish or Swedish.

Judy Lokken, of Las Vegas, was among the Swedes at the dinner, and she said her in-laws weren’t pleased when she married their son, a Norwegian man. They met in Kindred, North Dakota — population 722 — and she described the lineage of that town about 25 miles southwest of Fargo as 100 percent Norwegian.

Lokken added that it was her first time at the Boulder City dinner. Her daughter, Julie Ruschmeyer, seated to her left, described the Nordic crowd as typically friendly.

“It reminds us of home and family,” she said, praising attendees’ “good sense of humor.”

Brenda Sorenson, who also has Norwegian and Minnesotan roots, tried lutefisk for the first time at the dinner.

“It was OK, but it’s not something I would order again,” she said.

Fellow first-timer Jeanne O’Keefe had the same reaction, along with the faintest of praise.

When: This year’s dinner was at 3 and 6 p.m. Jan. 28. The lodge’s dinners are held on the last Saturday in January.